To avoid the dreaded Costanza Wallet, I began looking for an all-purpose holster that I could bring with me wherever I went. I wanted something super simple and super durable that could handle the destructive nature of my back pocket. In the end, I picked up Aaron Draplin’s DDC Stuff Sheath.

When I grabbed the Stuff Sheath the first time, I wasn’t sure something so simple would help organize all the junk I carry with me. After a few weeks of using it as my wallet though, I can’t imagine not having it with me. 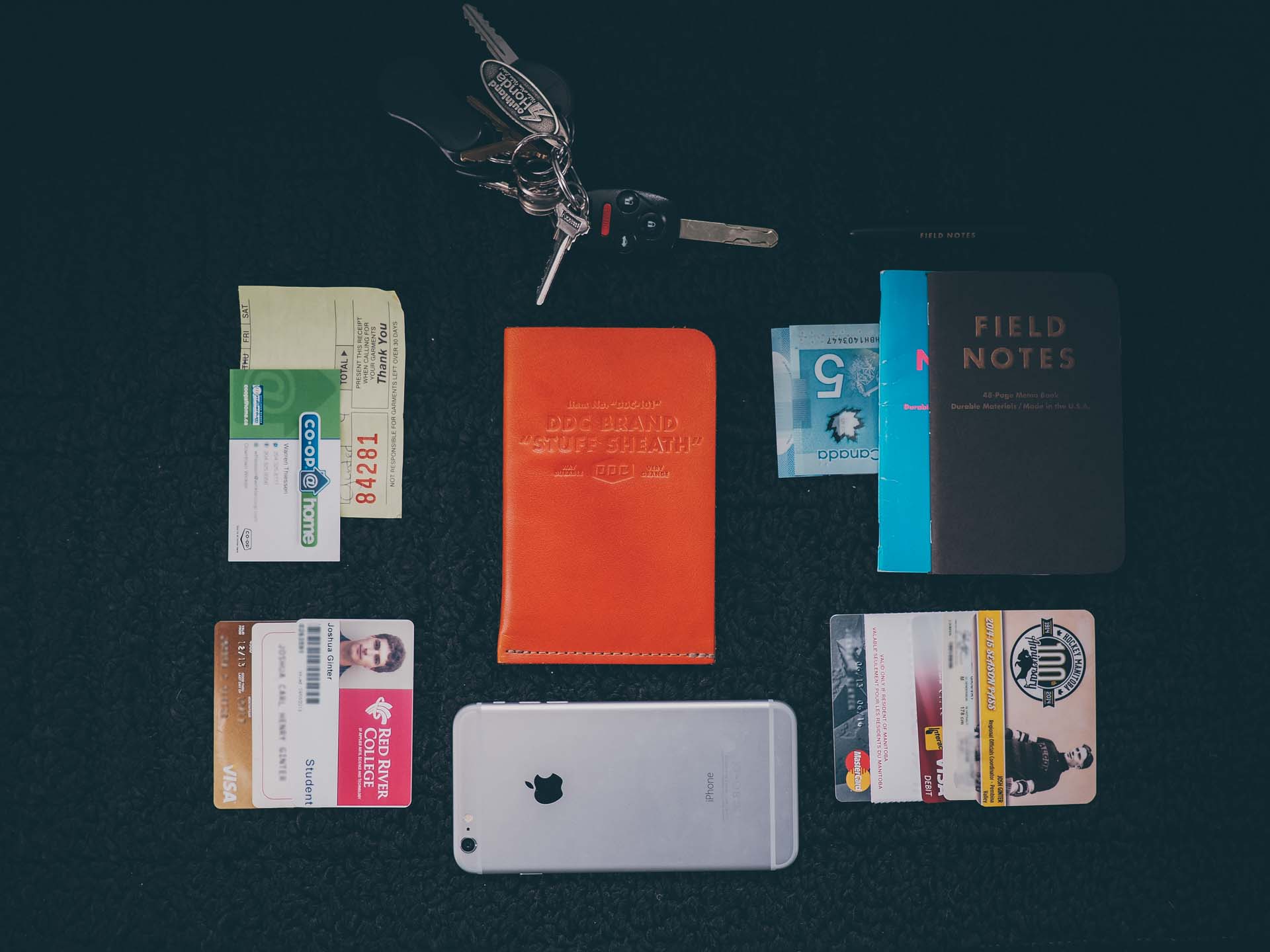 My everyday cary: Keys, iPhone, and the DDC Stuff Sheath stuffed with 8 cards, 2 Field Notes books, a receipt, a business card, and some cash. 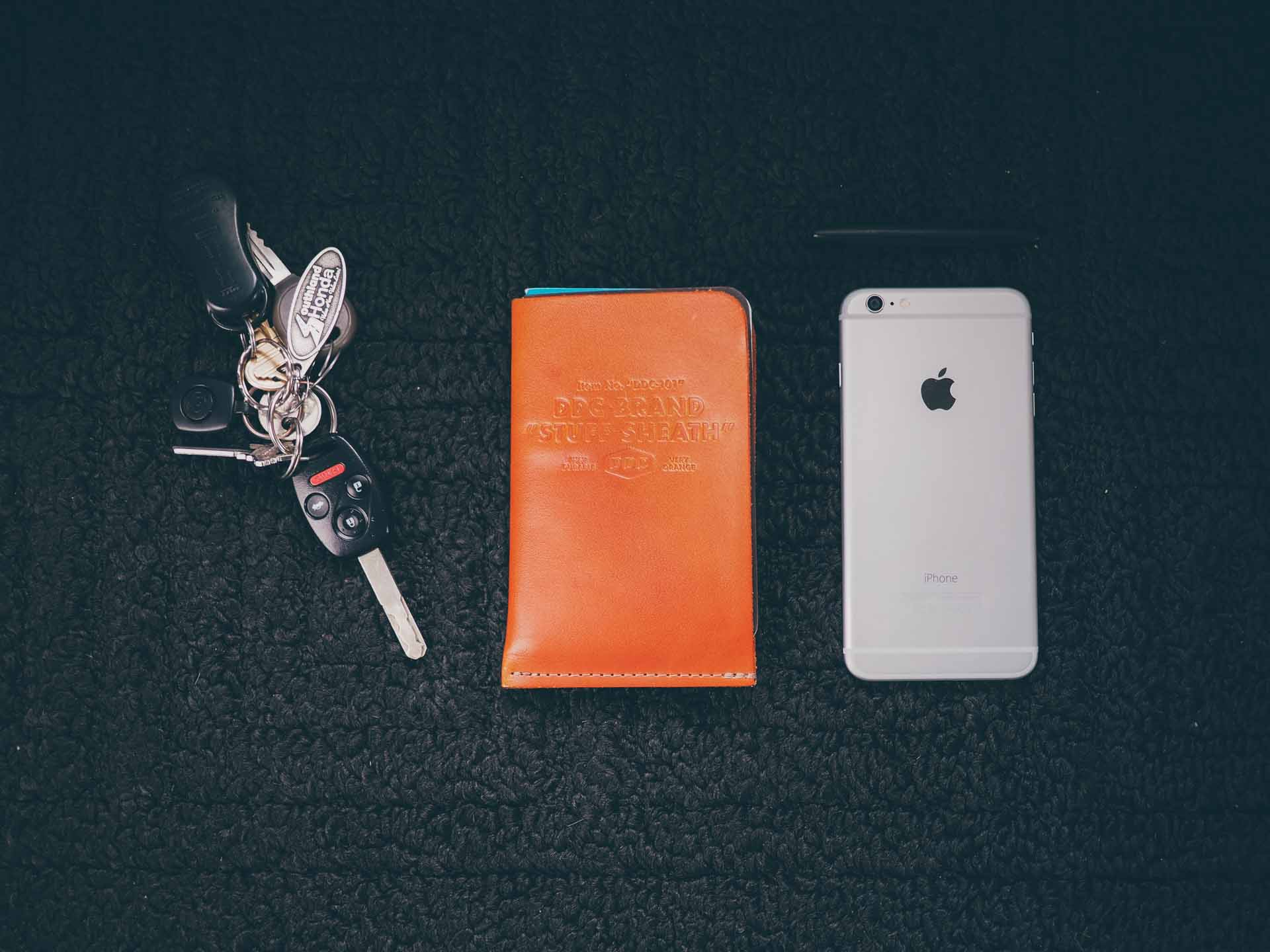 The DDC Stuff Sheath, with everything inside.

Right out of the gate, the DDC Stuff Sheath makes itself known. This thing is orange. Like really orange. It’s almost too orange. Whipping the sheath out in a professional environment may not have been its intended purpose. Seeing as the Stuff Sheath spends most of its time in my back pocket, I don’t get too worried about its loud nature catching anyone by surprise. 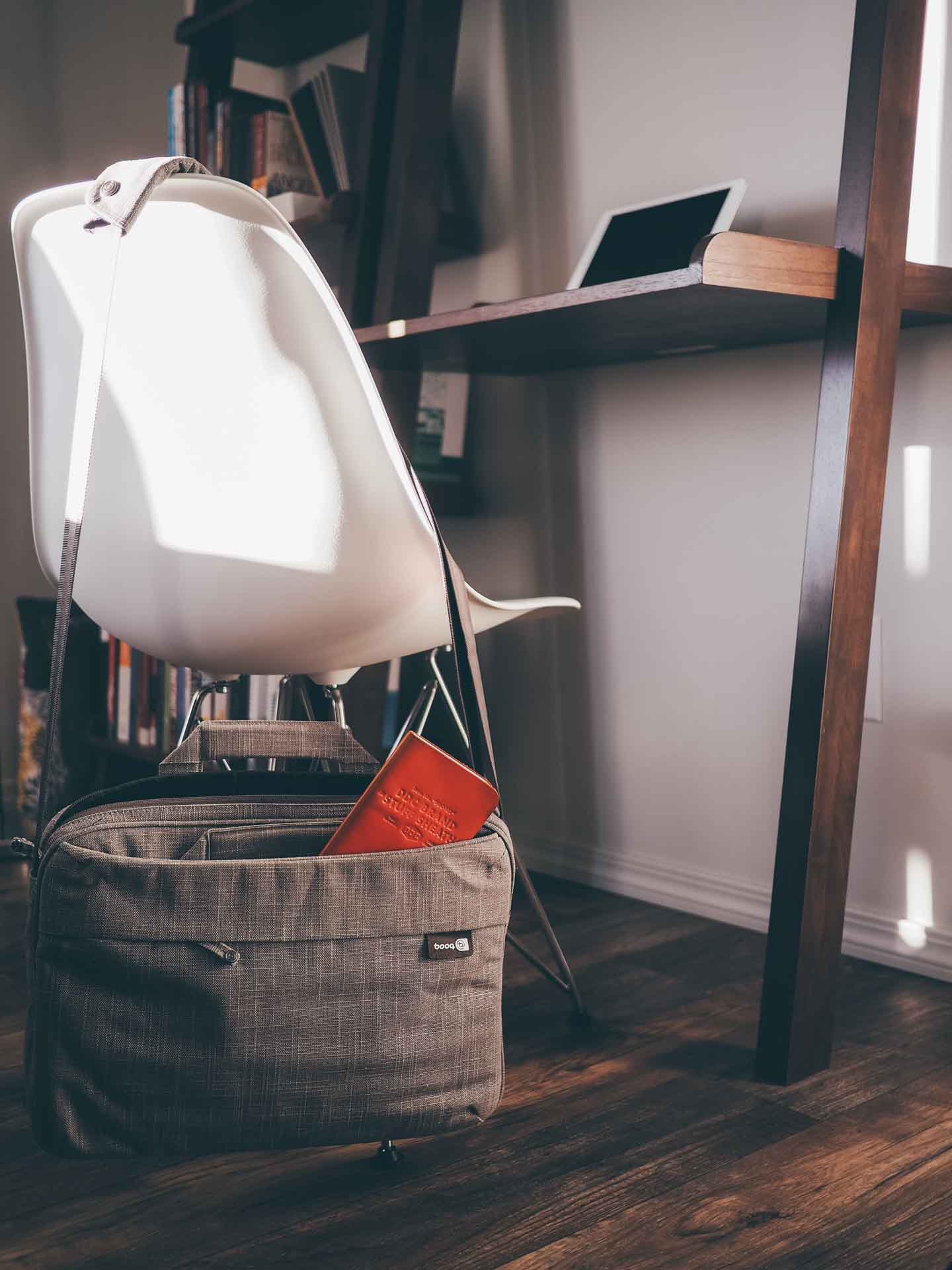 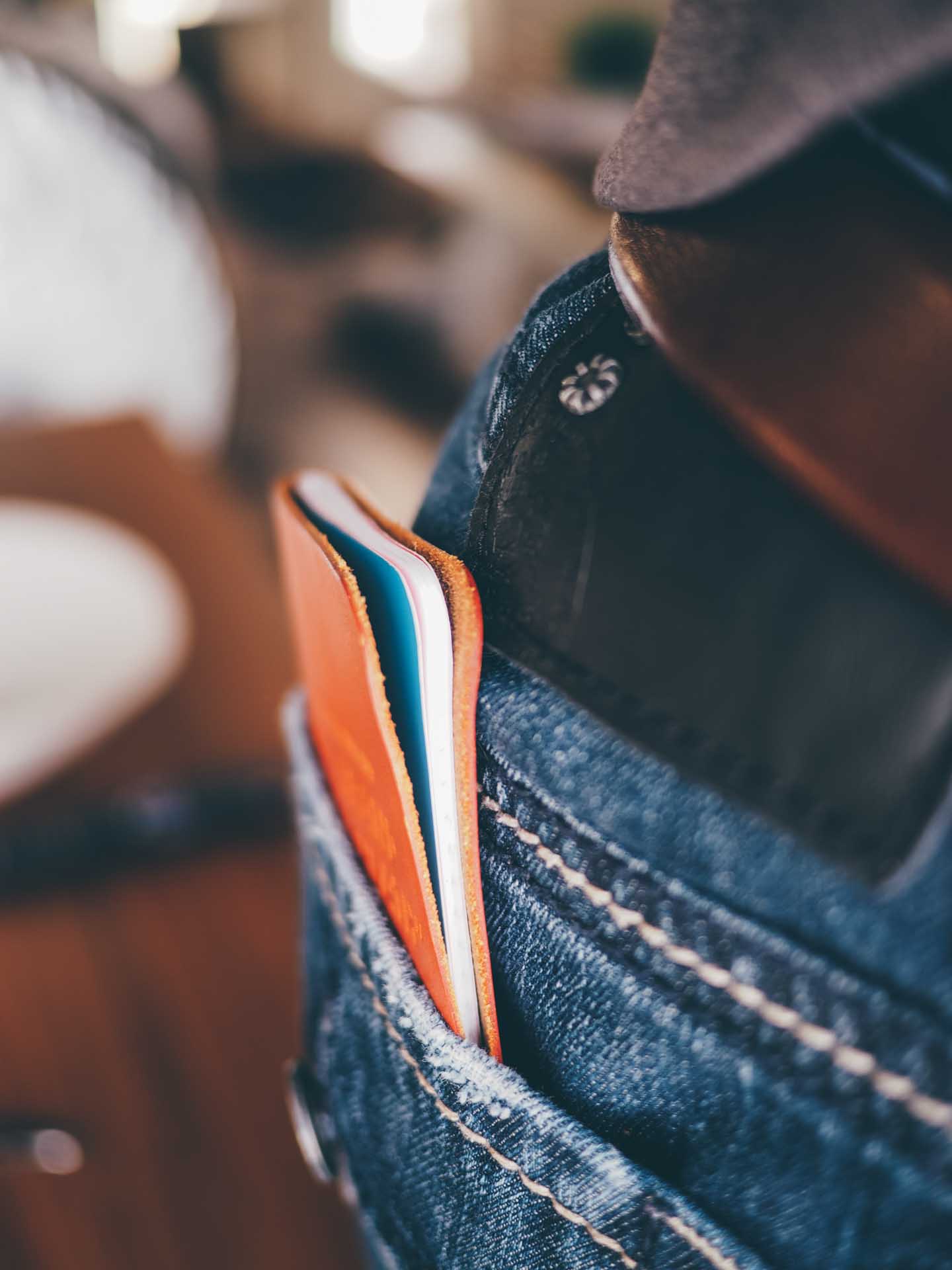 The DDC Stuff Sheath measures 3-3/4” wide by 6” tall. Naturally, it fits a Field Notes perfectly, but it is also large enough to carry along all the extra gunk you normally carry in your pockets. While I will admit that my Stuff Sheath isn’t always this full, I often find myself carrying five or six cards, two Field Notes books, some cash and other odd receipts or business cards all at once. With this much stuff packed in, the Stuff Sheath becomes noticeable in your back pocket. With a few less cards and one less Field Notes, I find I hardly notice the Stuff Sheath at all. 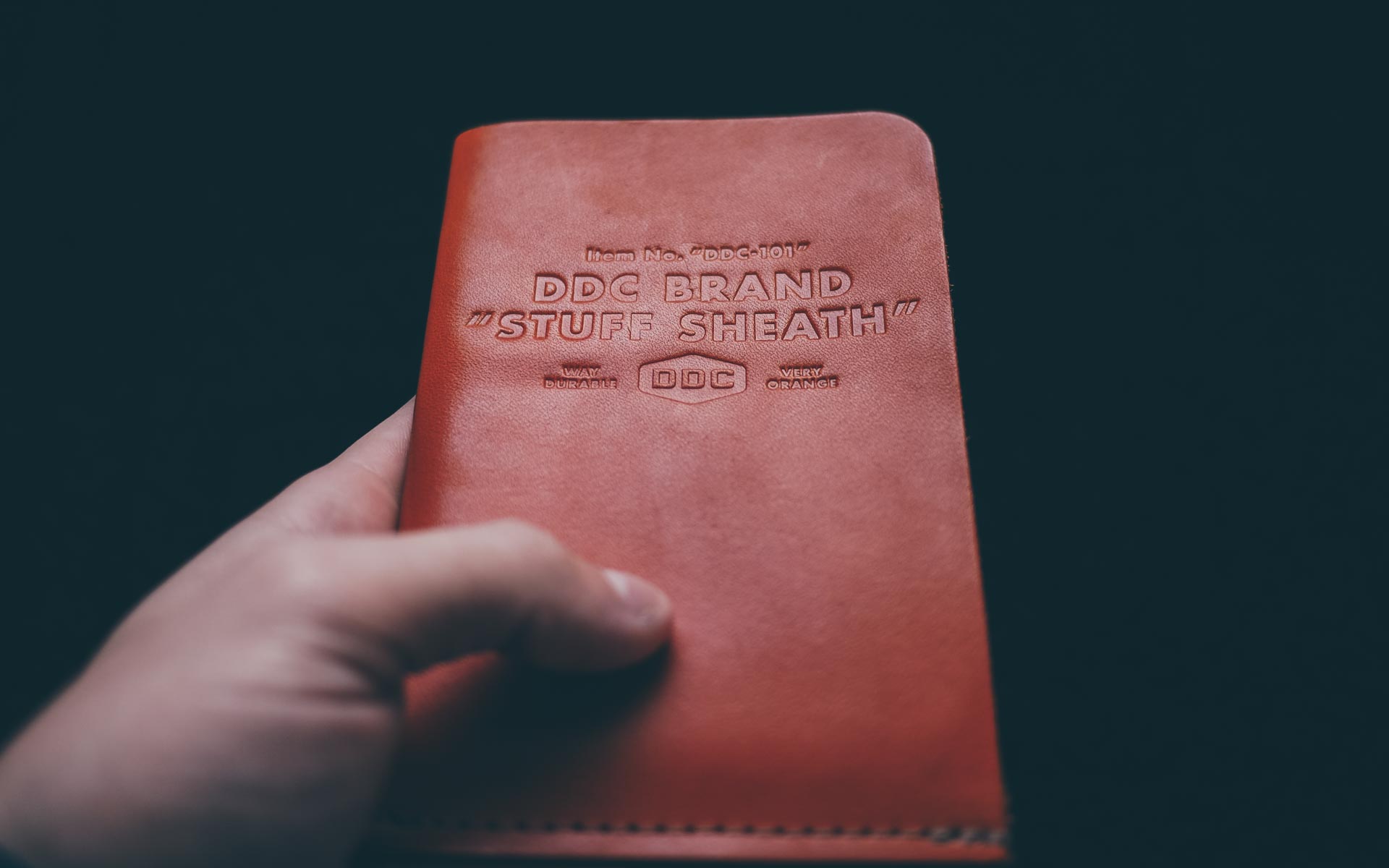 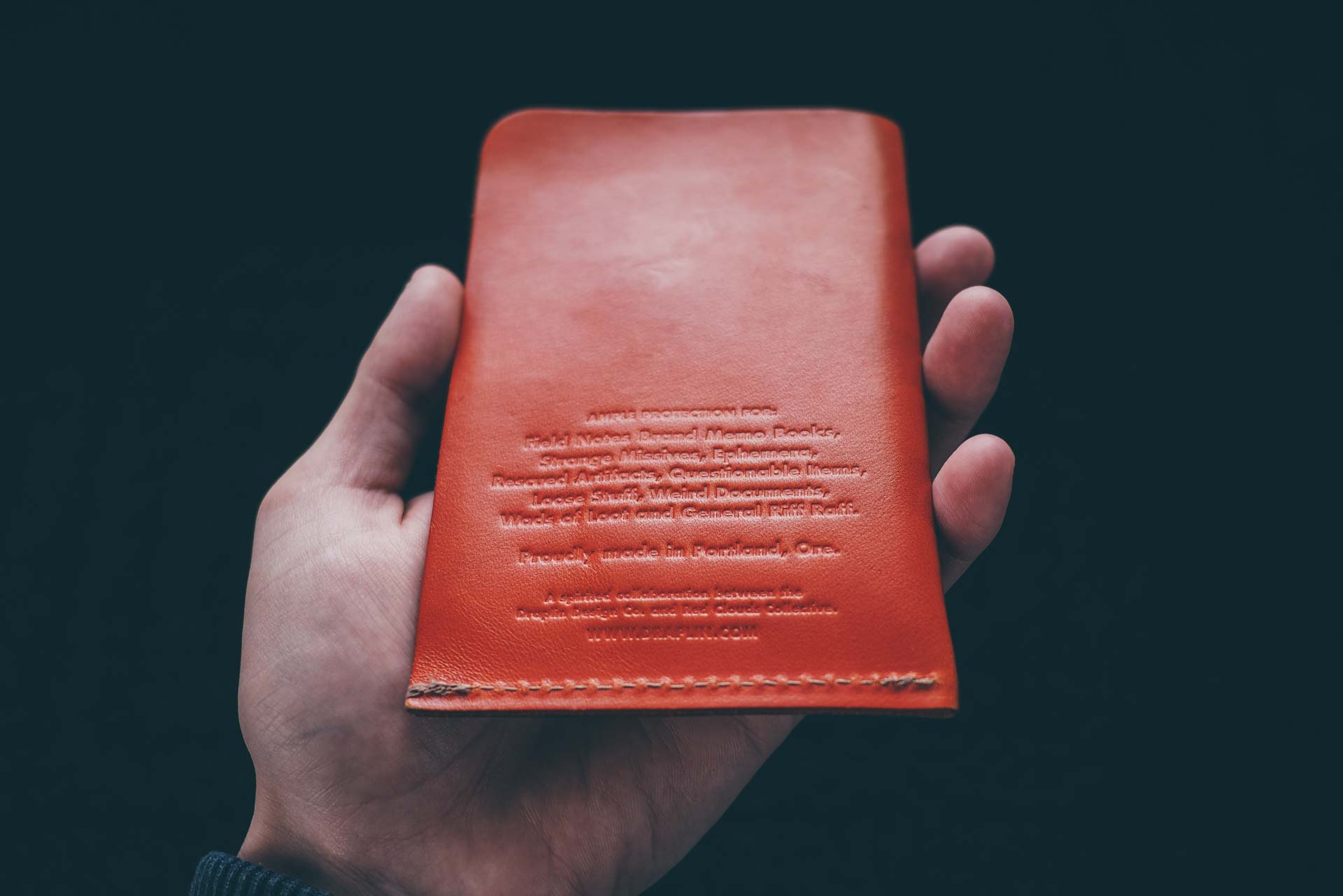 The front and back leathers are debossed with the awesome DDC/Field Notes Brand Futura-branding and a “Practical Applications”-esque description on the back. This description is masterfully worded and true to Aaron Draplin’s unique style. Based on the back description alone, there’s no doubting this Stuff Sheath was made to be battered, bruised and used. 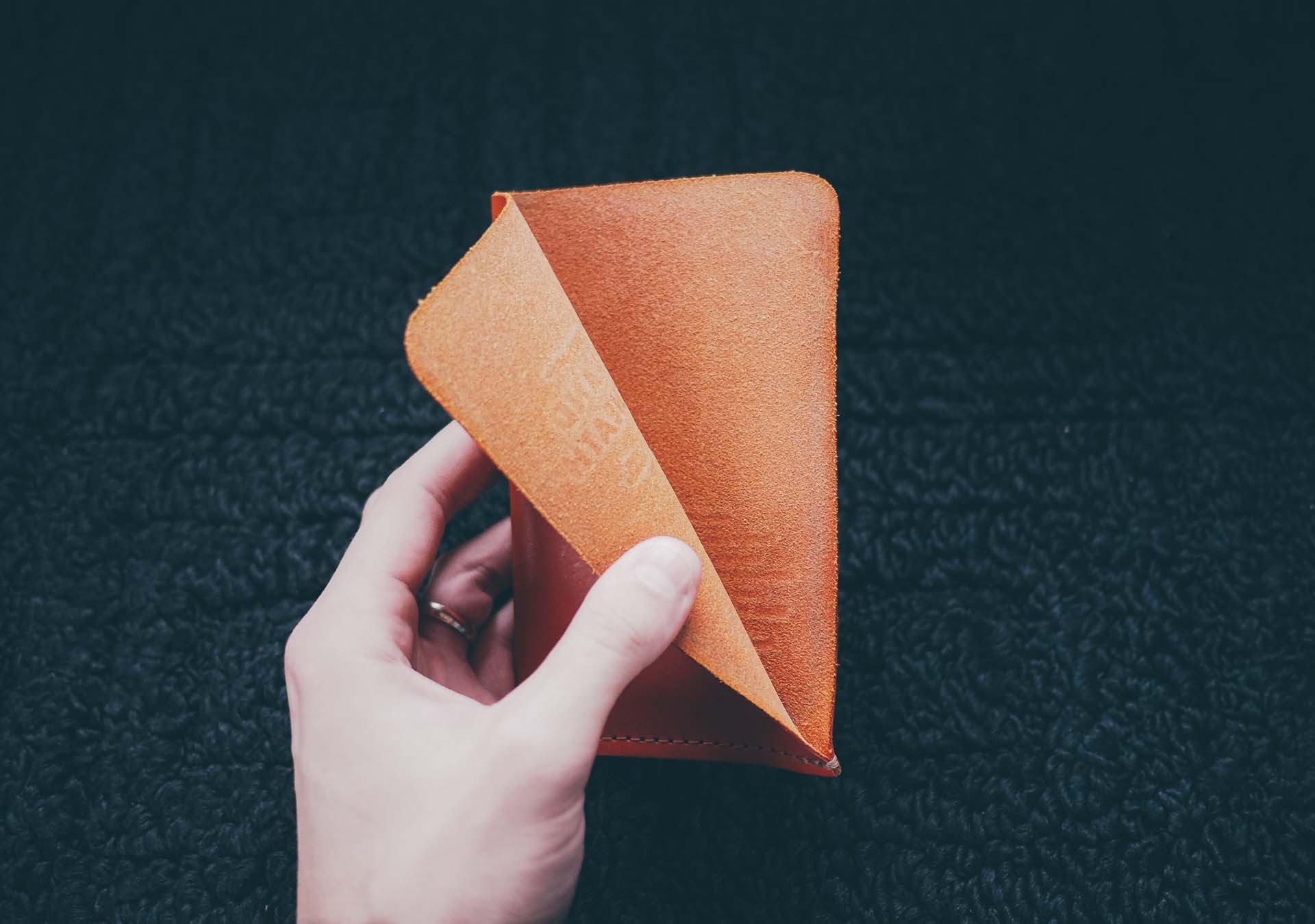 I was initially surprised with the thickness of the Stuff Sheath’s leather. I originally expected the leather to be of the same thickness as the Hellbrand Leatherworks Field Notes cover. The thinner leather disappointed me at first, but I’ve come to realize that the thinner leather works. In reality, thicker leathers are more noticeable in your back pocket and they tend to take longer to break in. By making the leather thinner, the Stuff Sheath is less noticeable in your bag or pocket and wears in in no time. 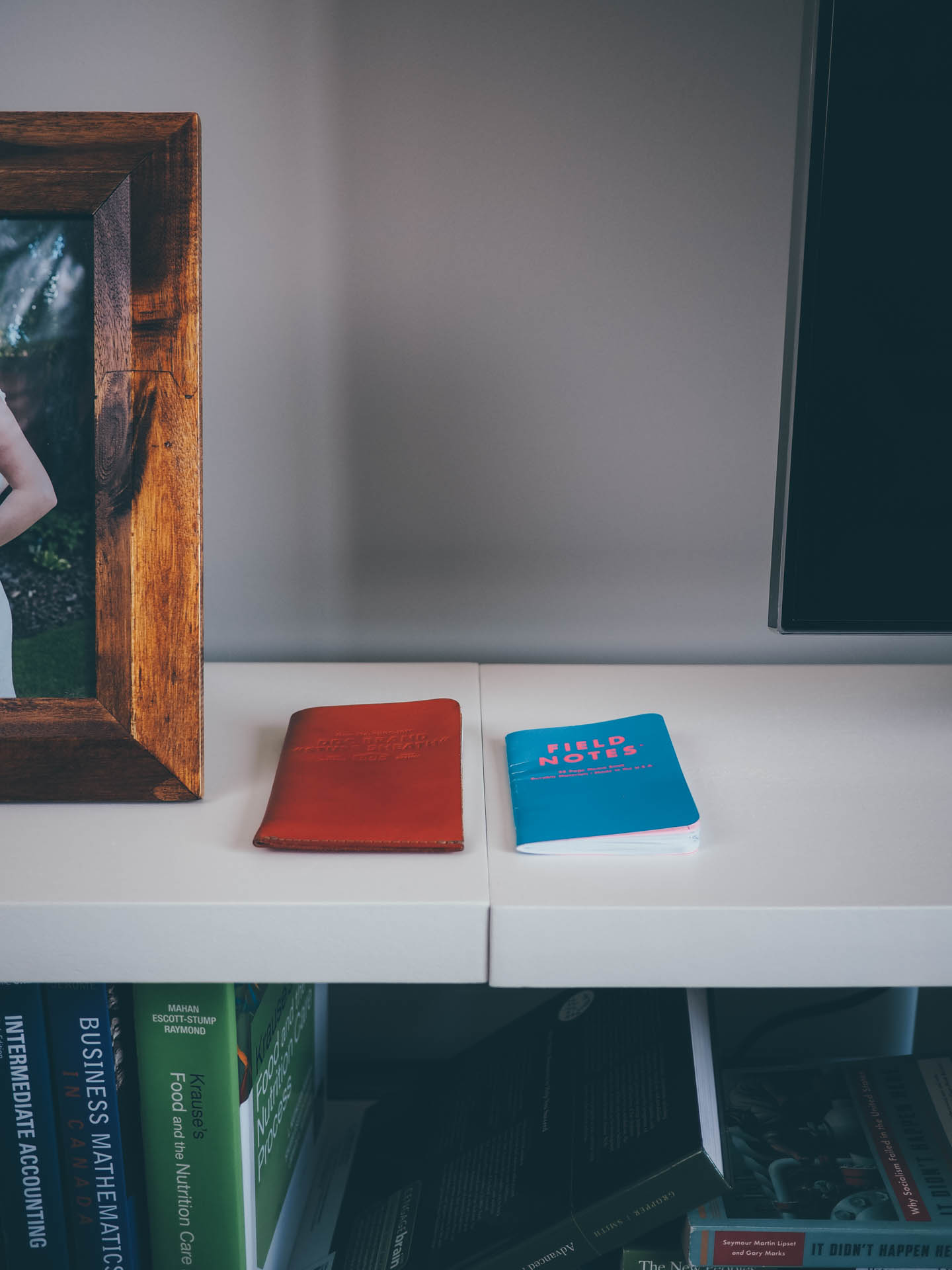 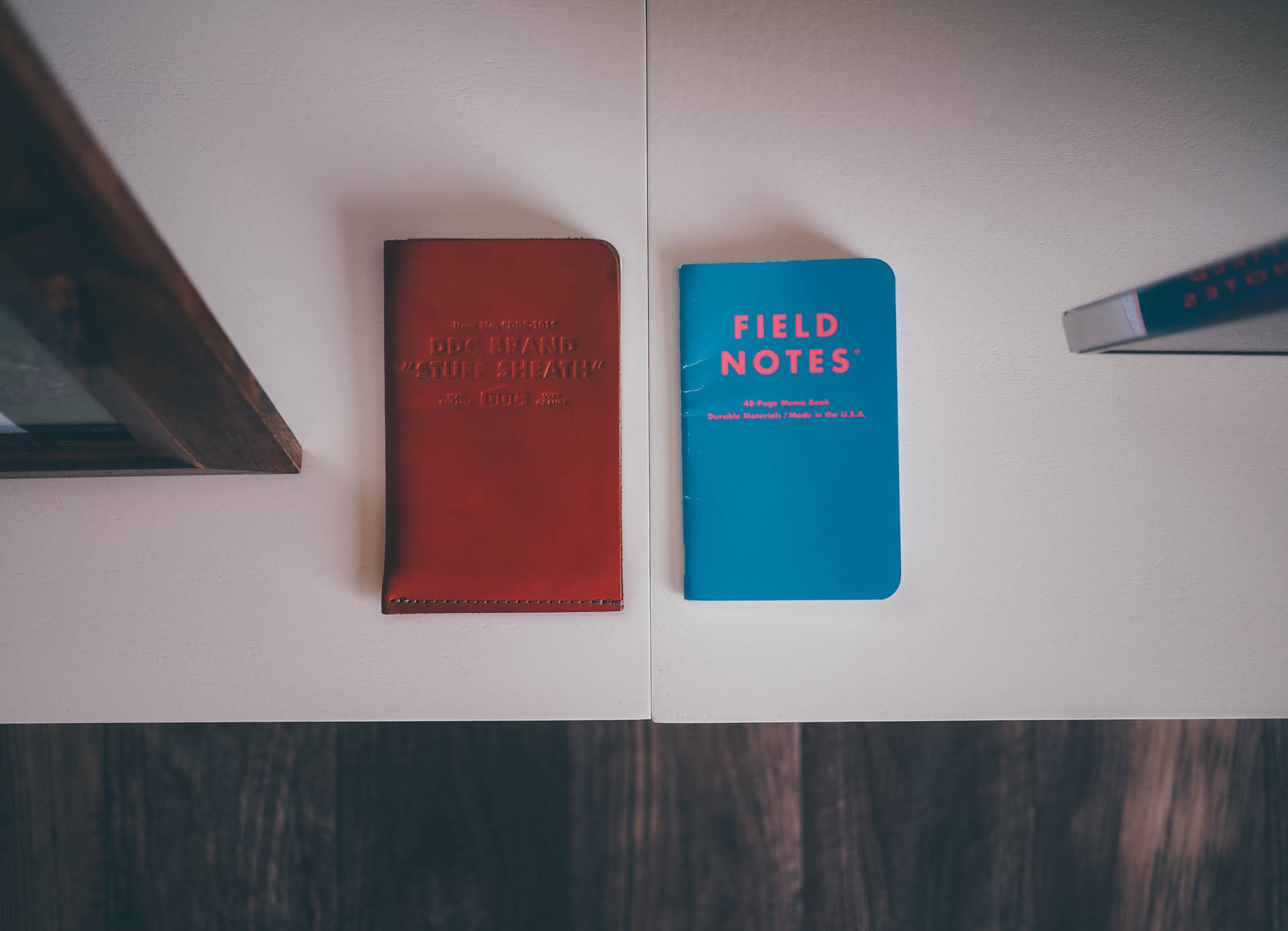 The leather develops nice creases in the middle as it takes the natural form of your back pocket. It also stretches and becomes looser with more and more stuff packed in. When I pulled the leather Stuff Sheath out of its original packaging, I never expected it to wear so nicely and to break in so quickly. 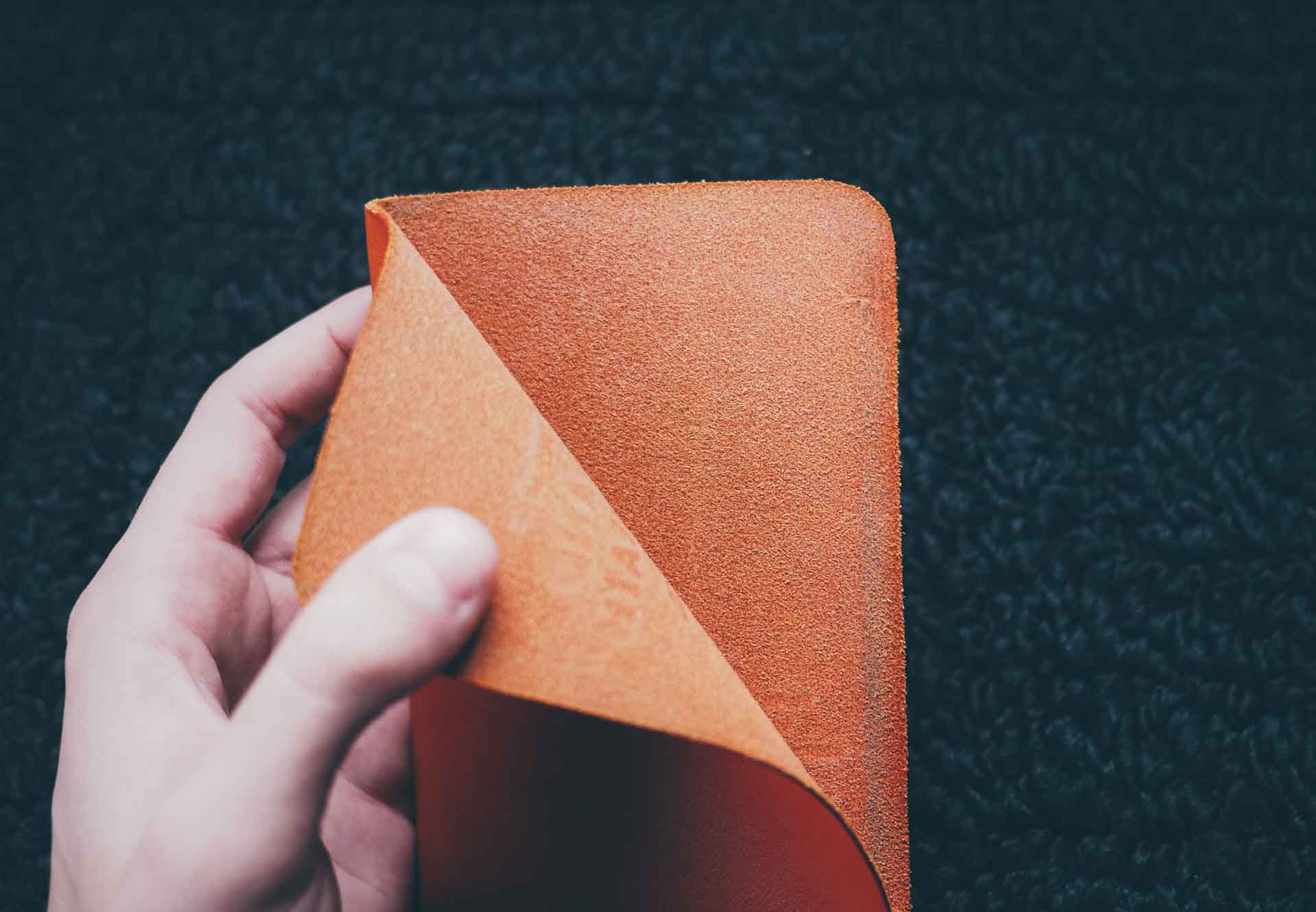 The inside of the cover is very unique and gives the Stuff Sheath its ability to house all your junk. The inside leather has been buffed and textured in such a way as to increase the friction with the contents inside. As a result, nothing slips out of the Stuff Sheath at inopportune times.

The Stuff Sheath doesn’t keep a Field Notes pristine and perfect. The inside texture rubs away that new glossiness or sheen (this is especially noticeable with a Drink Local Field Notes book) and provides a marvelous worn-in look for your books. 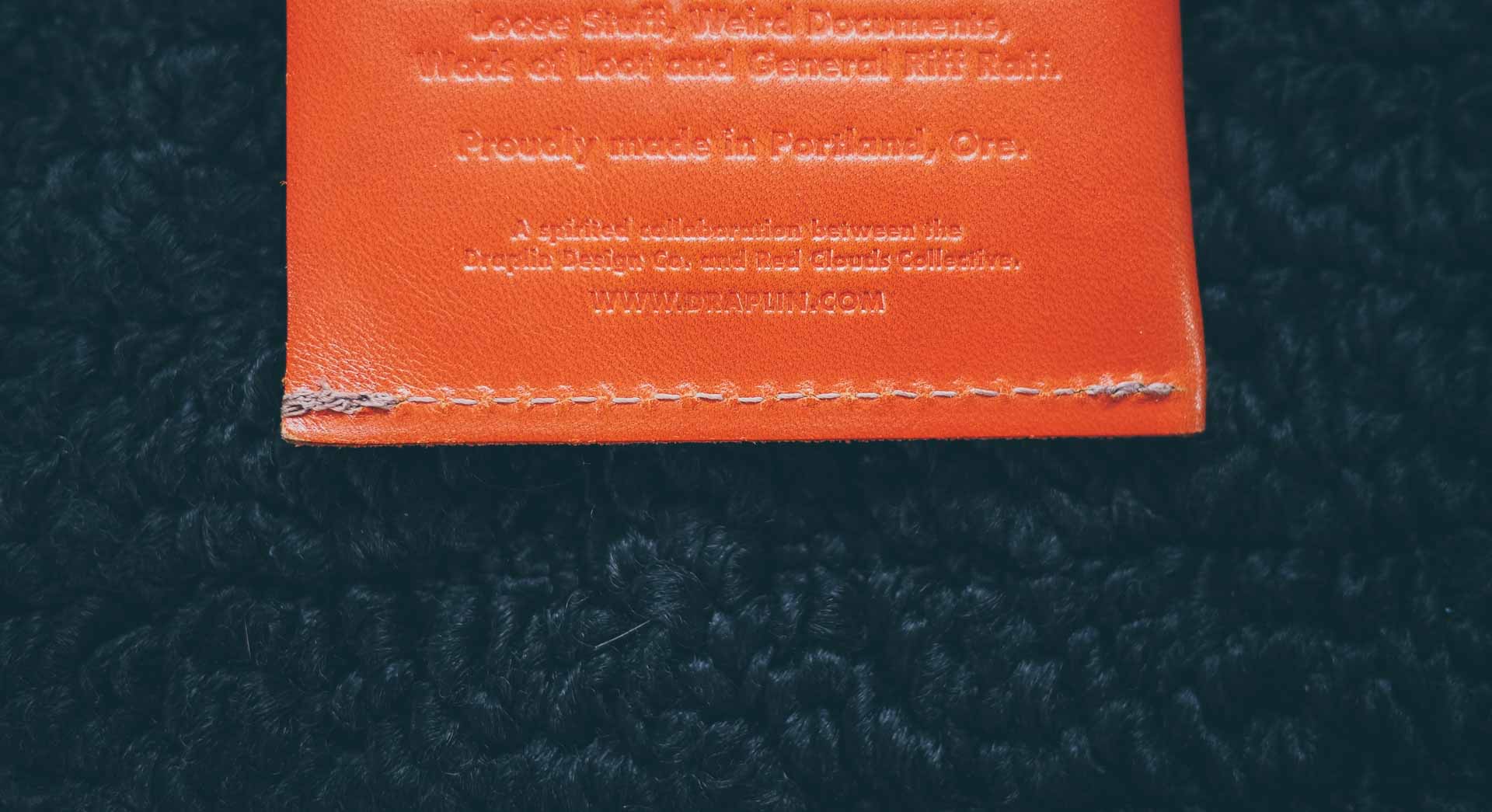 The DDC Stuff Sheath is essentially one piece of leather that has been folded and stitched on the bottom side. The stitching on the bottom is second to none. Not only does it look rugged and durable, it feels impossible to tear apart. Thread has been woven through the leather in multiple passes and this gives the Stuff Sheath its rugged durability. 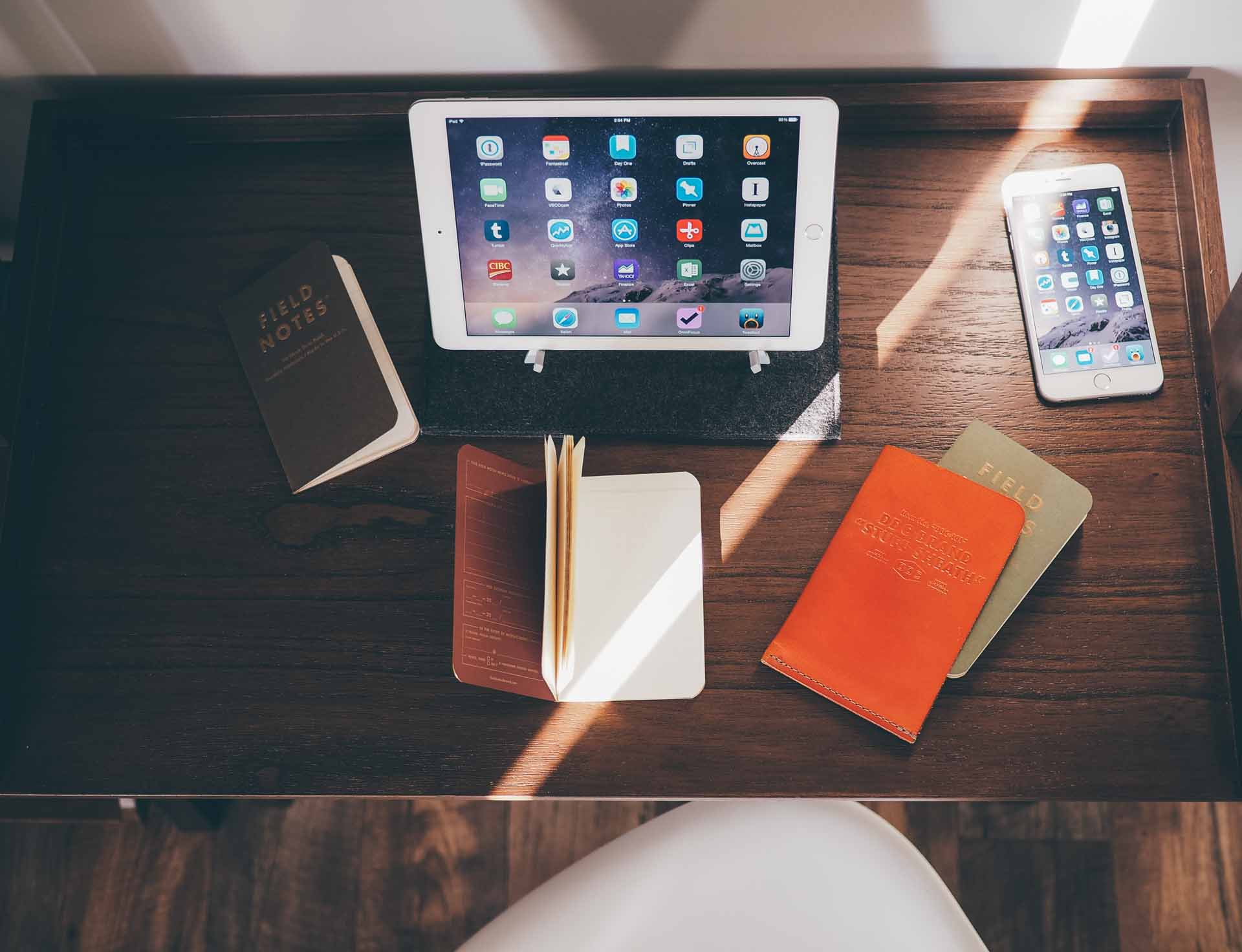 There’s only so much that can be said about such a simple tool. The DDC Stuff Sheath is literally a folded sheath of leather that holds all the riff raff in your pockets.

But, as with anything produced by Aaron Draplin, the DDC Stuff Sheath is ruggedly designed and excellently made. The textured leather on the inside of the sheath allows all your Field Notes to gain that desired worn-in look. The debossed branding gives the Stuff Sheath a unique character. And the top-notch stitching promises a lifetime of use. 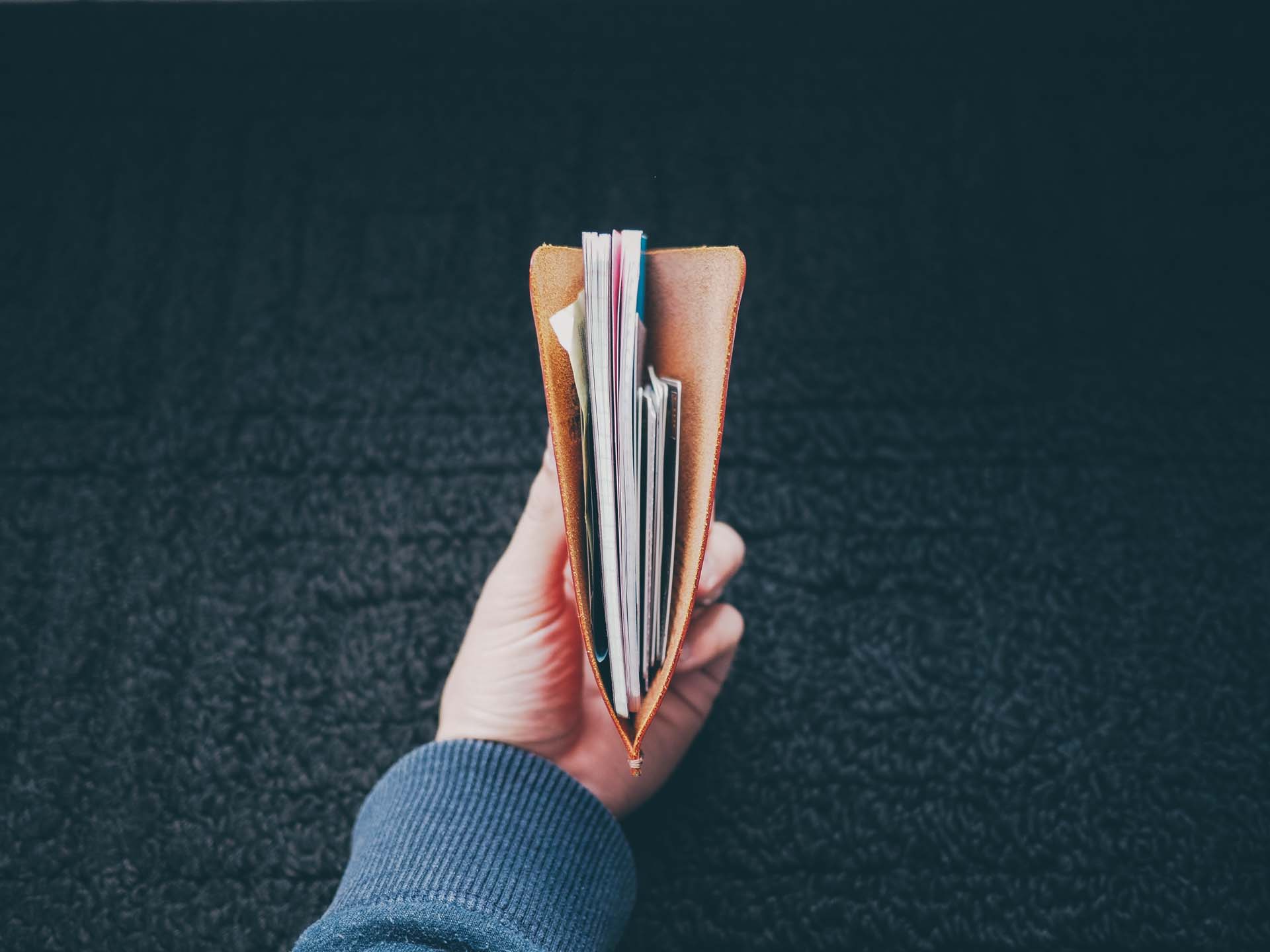 If you long for that beautiful Field Notes look but find you destroy Field Notes too quickly, the Stuff Sheath ($40) is the perfect thing for you. Or, if you constantly have junk in your pockets, I recommend grabbing one of these to keep things a bit tidier and to provide a dash of loud character.

Did I mention this thing is orange? Way orange. 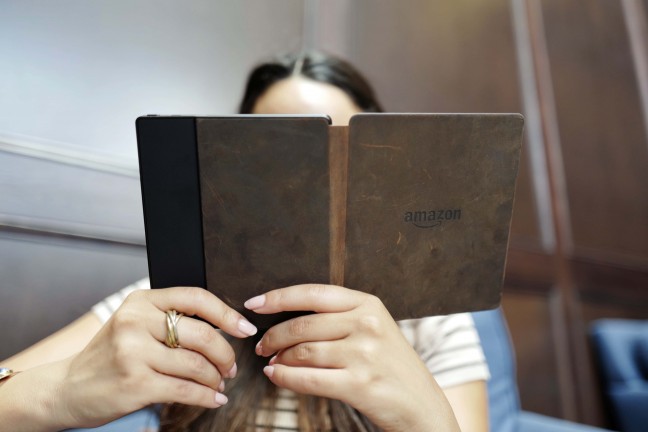 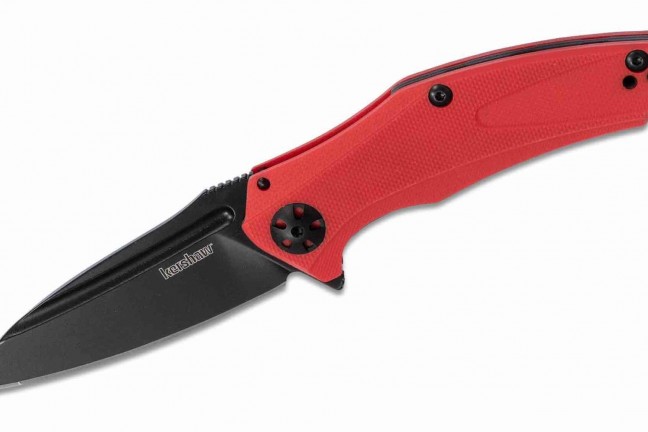 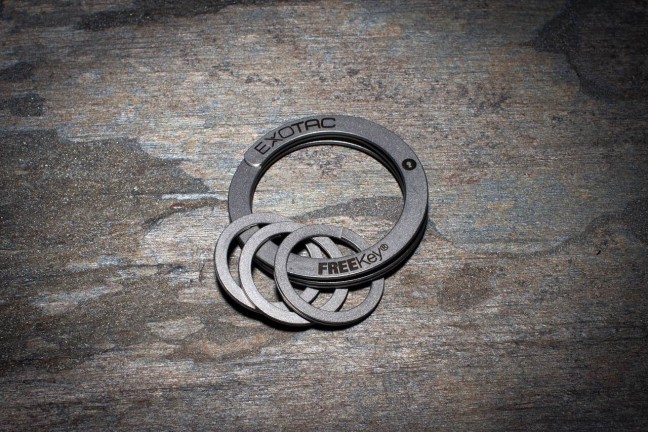