Okay, that last one was a joke, but people do take this stuff pretty seriously. Given the chance, many self-styled “baristas” out there will gladly give a dissertation on why your way of making coffee sucks and theirs is the best. But there’s one thing they almost all agree on: Everyone’s coffee kit should have a gooseneck kettle.

Back in 2011, Oliver Strand of The New York Times described what makes a gooseneck so great (bold emphasis mine):

The narrow spout produces a thin, precise stream, and the handle brings your hand into a naturally balanced position — instead of flooding the filter and letting it drip, you deliver a measured amount of water over a period of several minutes. It might sound precious or tedious, but the control is enthralling. It’s like picking up a drafting pen after only writing with Magic Markers.

It’s hard to put it better than that. Whether you’re brewing with an AeroPress, a pour-over contraption like the Hario V60 dripper, or the larger Chemex, a gooseneck kettle offers the ultimate pouring control and precision.

Bonavita’s variable-temp gooseneck kettle is one we’ve mentioned a lot around here at Tools & Toys. It made the cut for our 2014 Christmas Catalog and we consider it an essential piece of kitchen gear. One thing we’ve never done though is give an in-depth review about why it’s so great. That changes today. 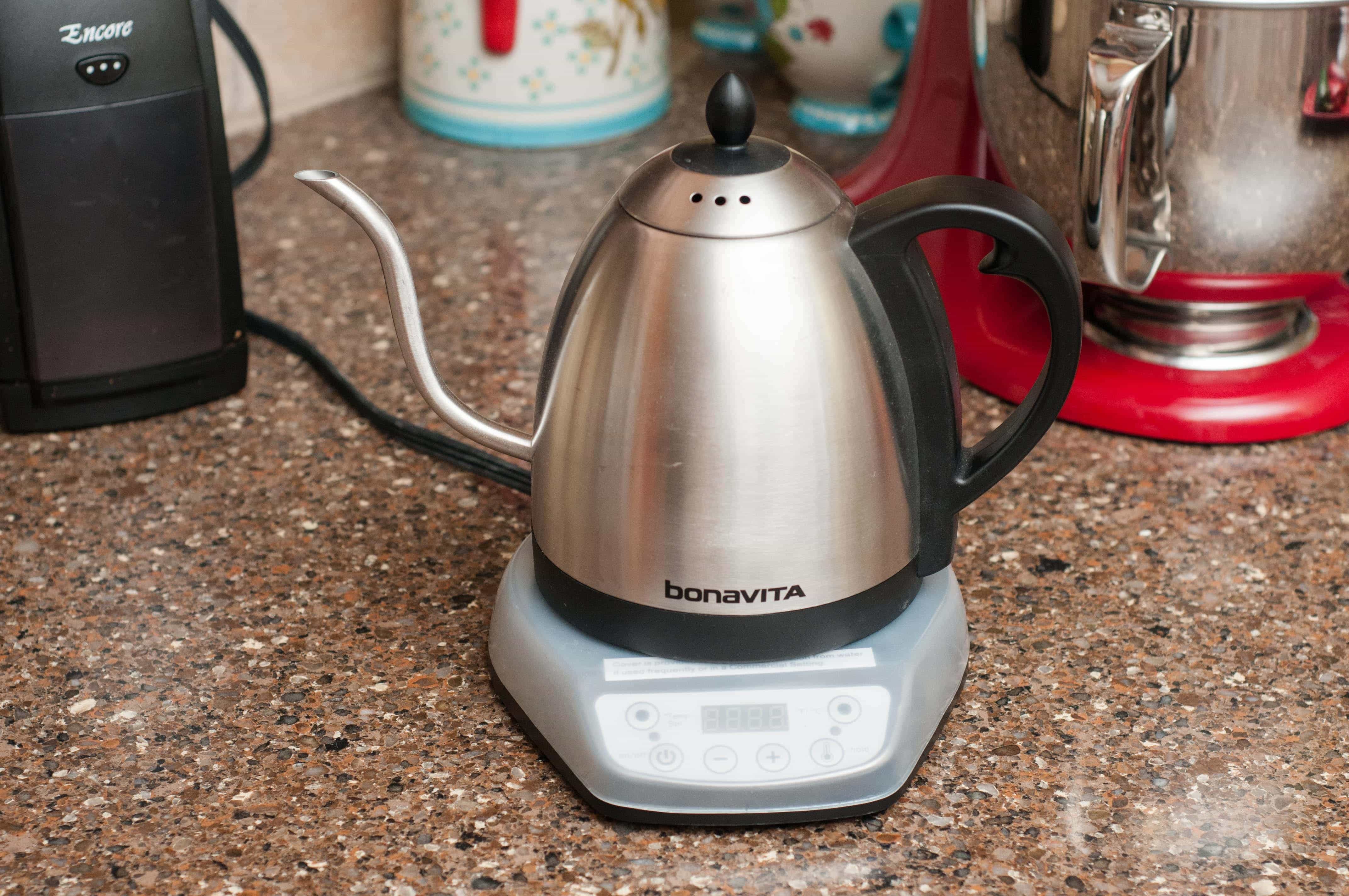 Let’s clear up right now that if you just want something that makes water hot for you, any old kettle will get you by just fine. Heck, you can get the variable-temp’s non-adjustable counterpart and save yourself $26, or maybe pick up a classic-style whistling kettle on the cheap. If you’re not going to fiddle with your coffee brewing, the variable-temp isn’t for you. 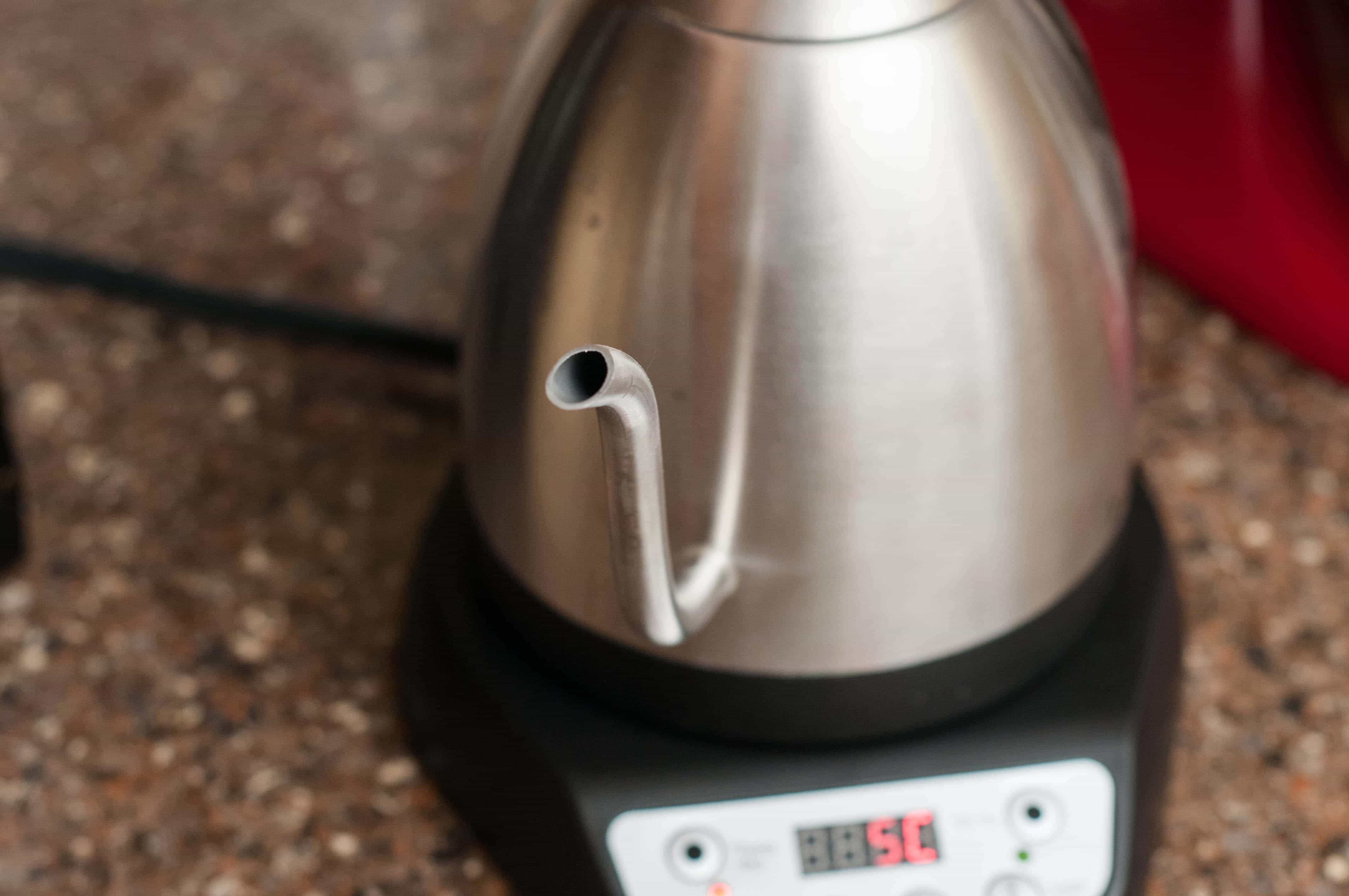 The gooseneck spout is the hallmark feature of the variable-temp kettle, allowing for better precision and accuracy when pouring boiling water into your favourite coffee brew kit. 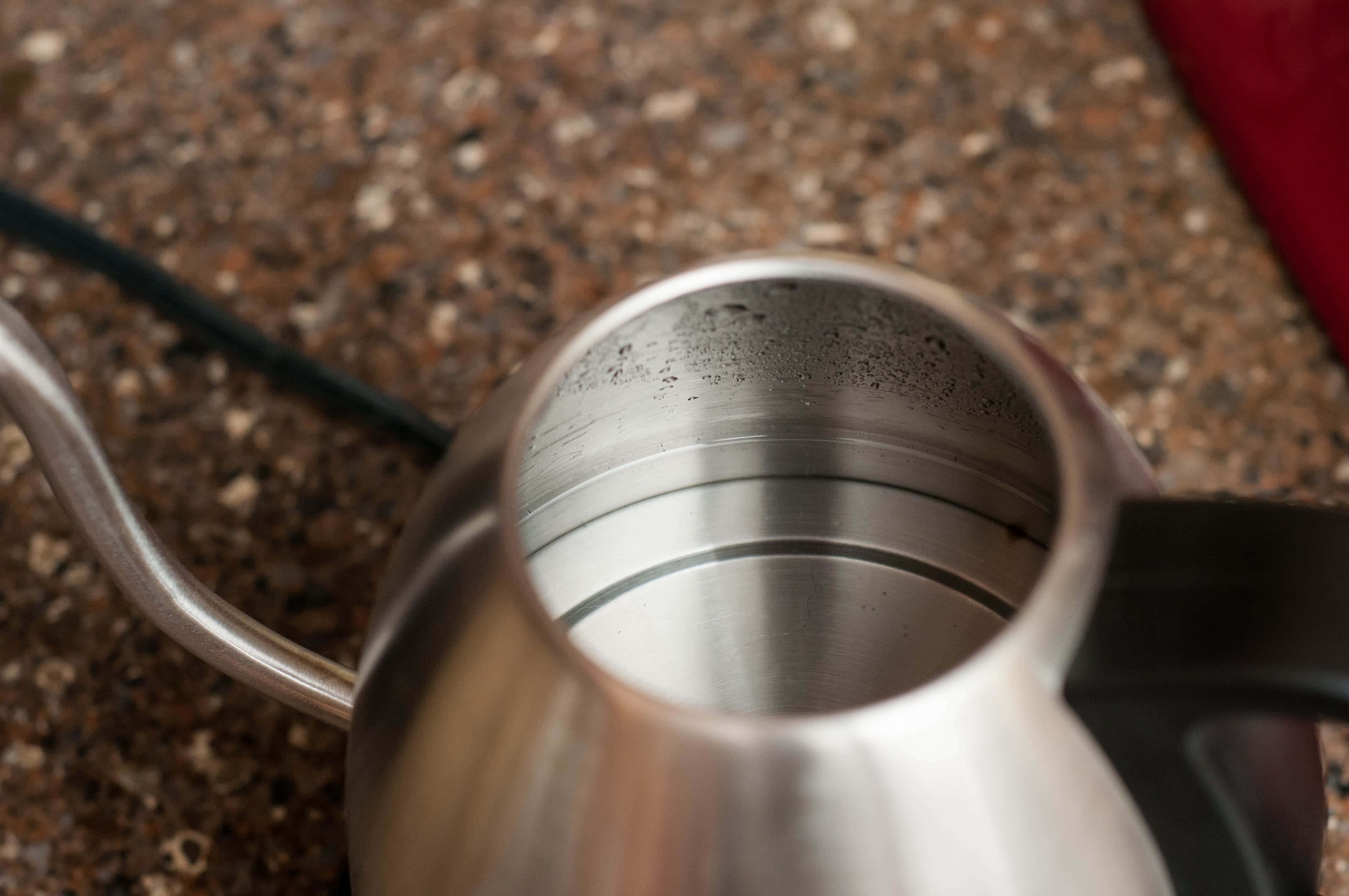 The stainless steel kettle can get extremely hot when boiling water. 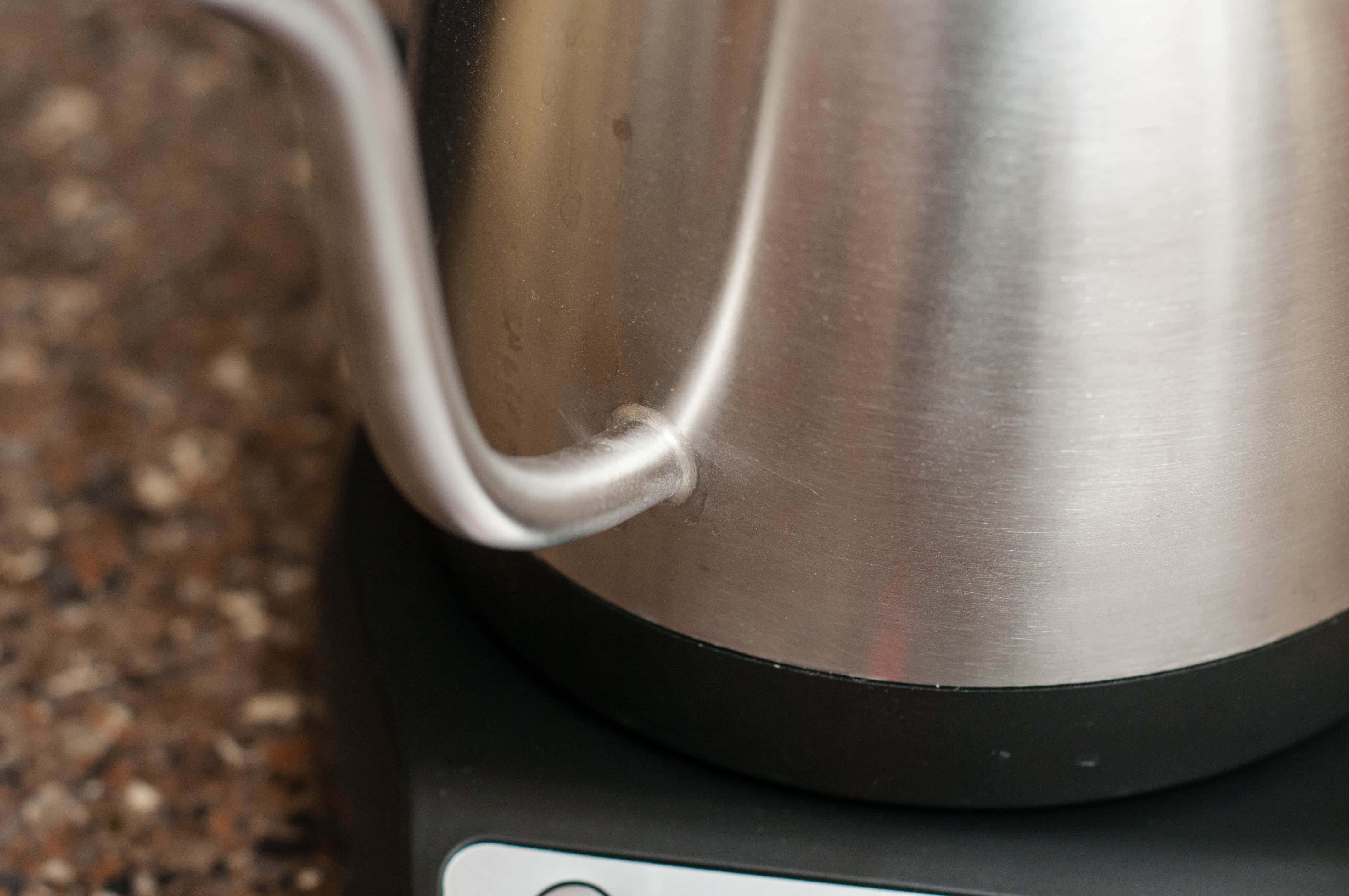 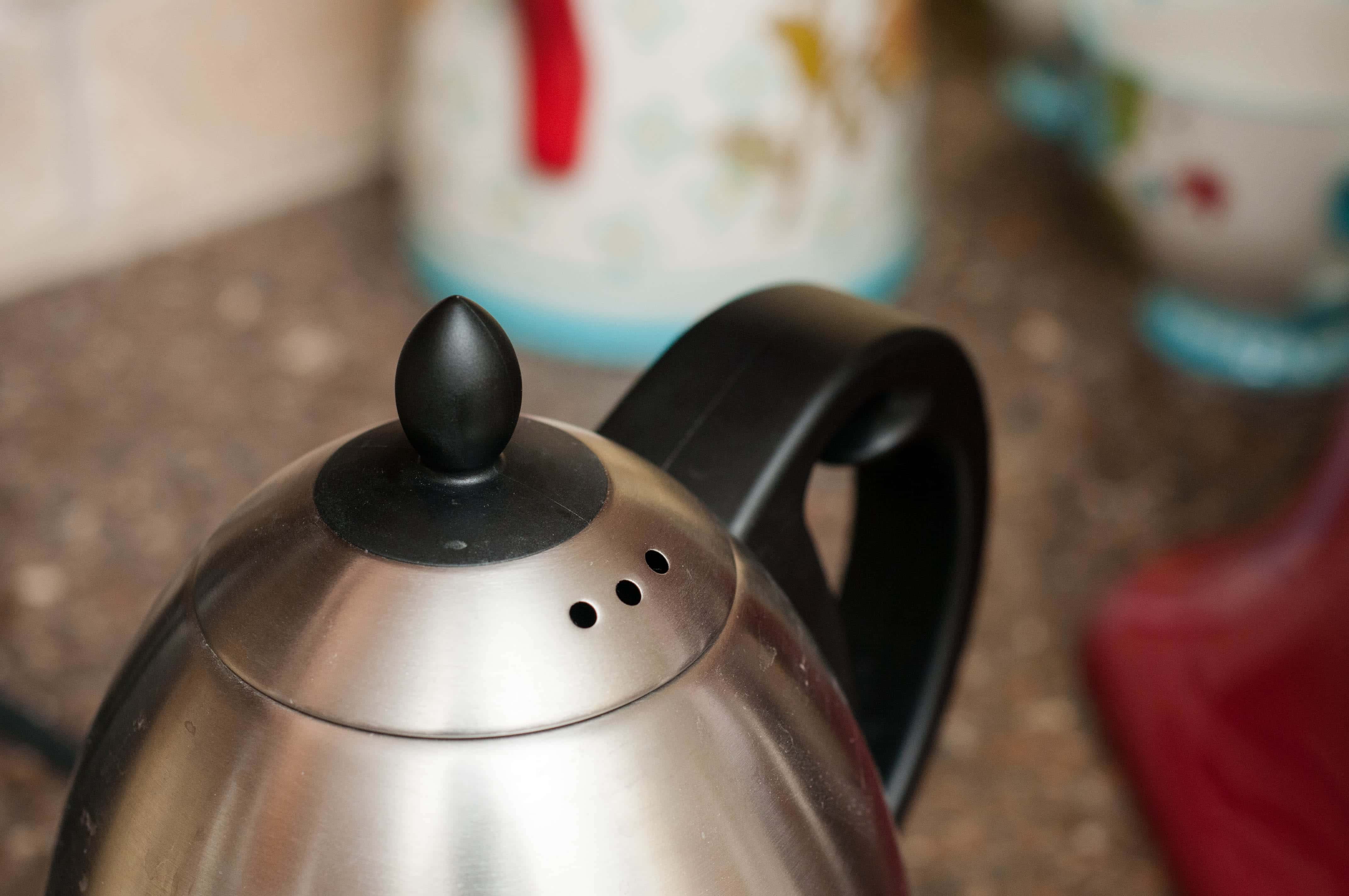 The top lid of the Bonavita variable-temp gooseneck kettle.

However, if you do want to experiment a bit — or maybe follow some fancy AeroPress recipes to the letter — then you’ll love the variable-temp kettle.

Note: For this review, we will only be discussing the 1-liter version of the gooseneck kettle, which usually hovers in the $80–$85 price range. They also offer a larger 1.7-liter version that we’ve seen sell for anywhere from $95 to $160, but we haven’t tested that one so much. The performance is probably similar (especially since they share the exact same heating unit/base), but we make no guarantees at this time.

There’s a lot to love about this thing. Let’s break it down.

To start with, the kettle comes with six preset temperatures that you can switch between by pressing the “Temp Set” button:

But, the real magic lies in its ability to heat to any temperature you set, in one-degree increments, all the way up to boiling (212°F / 100°C). Simply press the “Temp Set” button on the kettle’s base/heating element, and while the display is flashing, press the + or - button until you get the temperature you want. To make things go a little faster, you can switch to any of the presets listed above first and adjust from there. 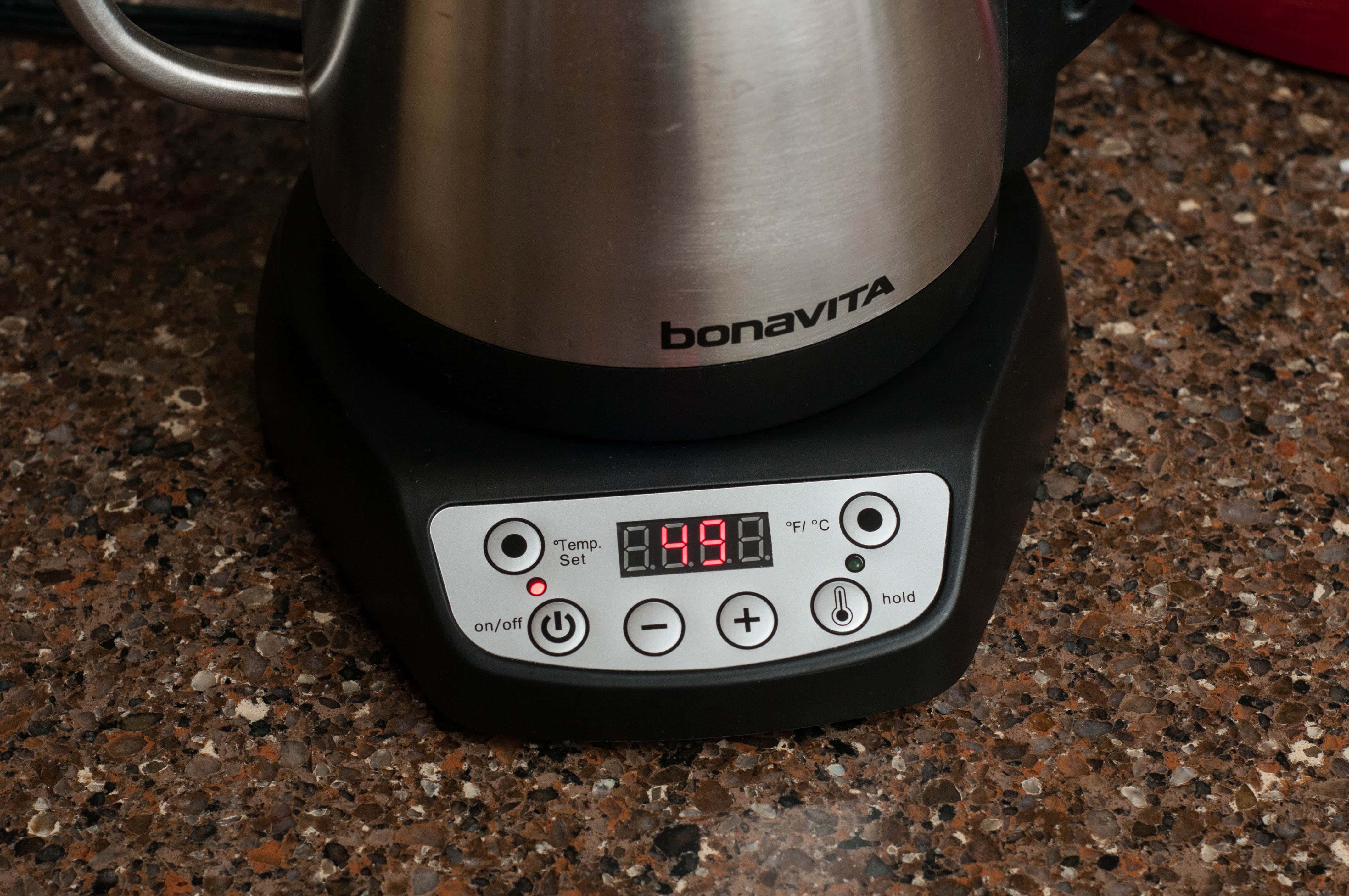 If you press the “Temp Set” button on the left, you can manually choose any temperature up to 212°F / 100°C and have the kettle bring the water to your desired temperature at the press of a single button.

Whatever temp you set is stored in memory and recalled the next time you turn the kettle on, even a year later. Once it heats water to the set temperature, the kettle shuts off automatically — that is, unless you’ve pressed the “Hold” button to have the kettle maintain that temperature (give or take a degree or two) for an hour. This function works by continually turning the heating element on and off as needed.

A couple notes about the “Hold Temperature” function:

There’s also a button on the base that switches between °F and °C modes. This is certainly convenient, though you’ll probably only ever use it once unless you really enjoy checking what the current temperature is on the other scale before switching back.

If you open the kettle’s lid and look inside, you’ll see a tiny metal rod sticking out of the bottom. That’s the thermocouple that tells the base what temperature the water is at any given time, and it’s very accurate.

The way it achieves accuracy within a degree or two of your desired temperature, every single time, is that as the kettle heats and reaches 10°F below the temp you’ve set, it begins “pulsing” the heating element off and on until it sort of eeeeeeases up to that temperature. You’ll hear some repeated clicking as it goes through this process, which is totally normal.

Here are a few more great things that don’t require sections of their own: 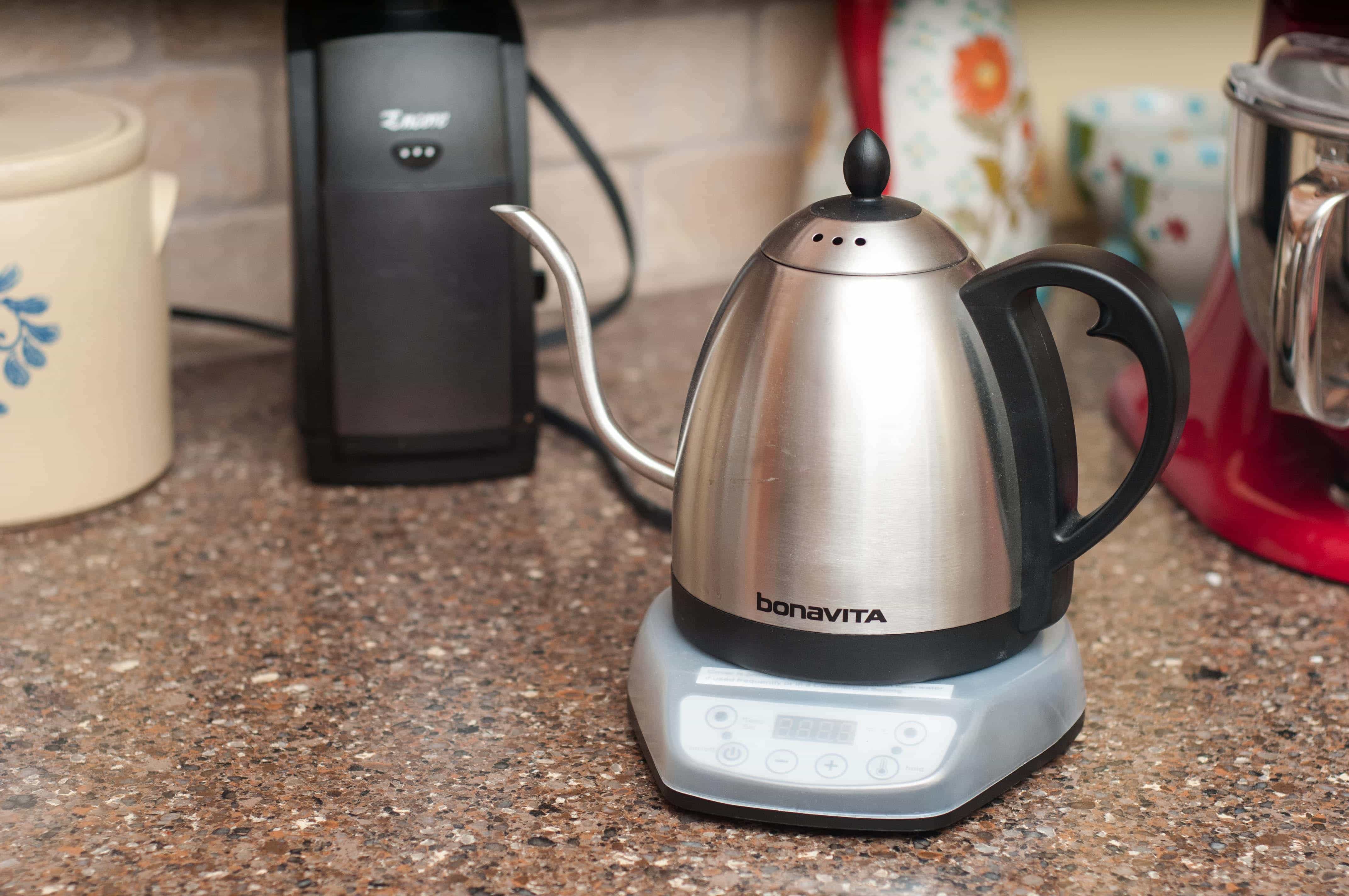 Notice the little nubbin on the kettle’s handle. This nubbin really improves the ergonomics of the kettle when pouring. 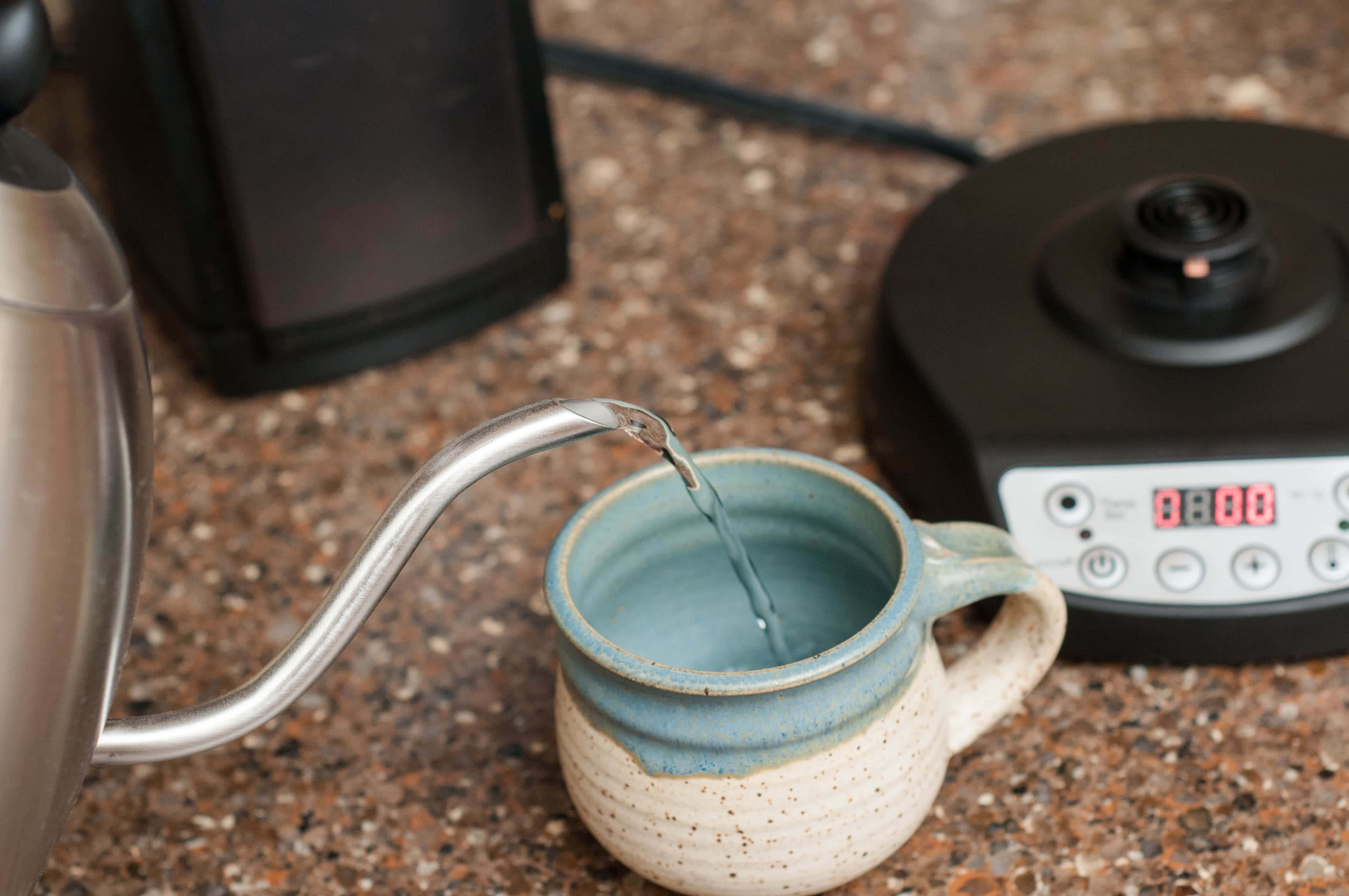 Pouring control is what the Bonavita gooseneck kettle does best. 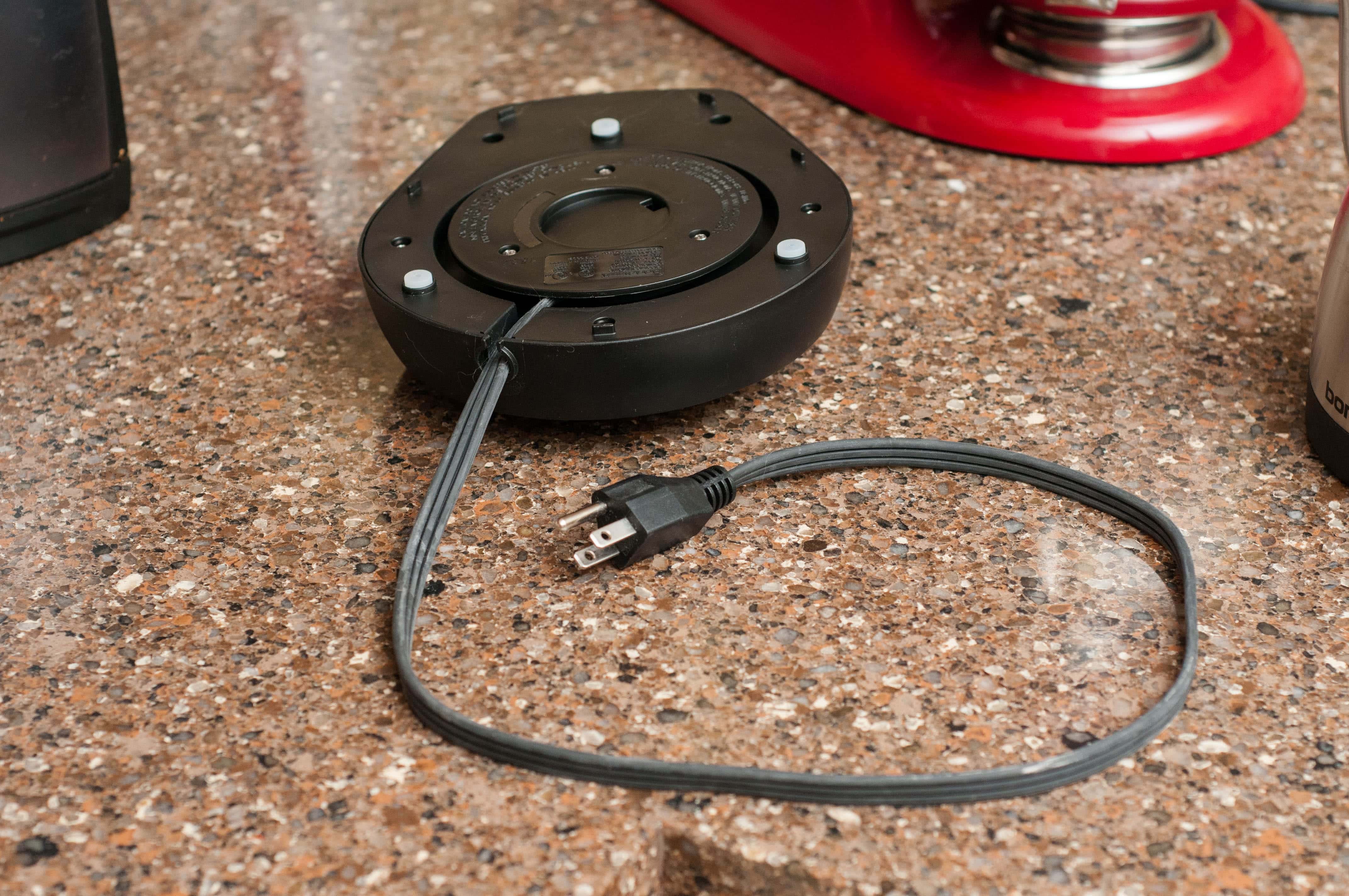 The power cord wraps neatly inside a storage compartment on the bottle of the kettle’s base. 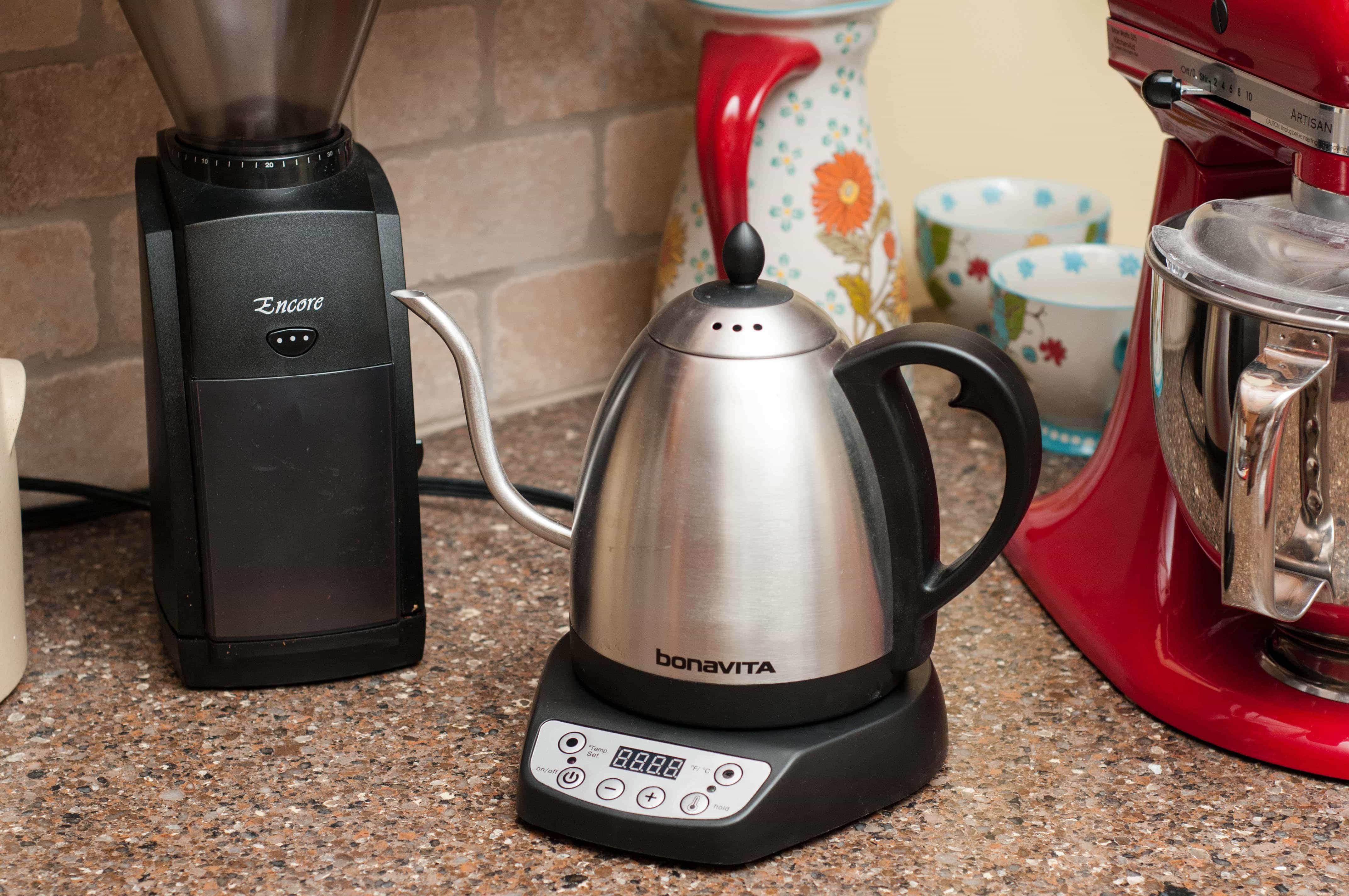 Bonavita includes a handy cover to go over the base of the kettle to help eliminate unnecessary touches and burns. 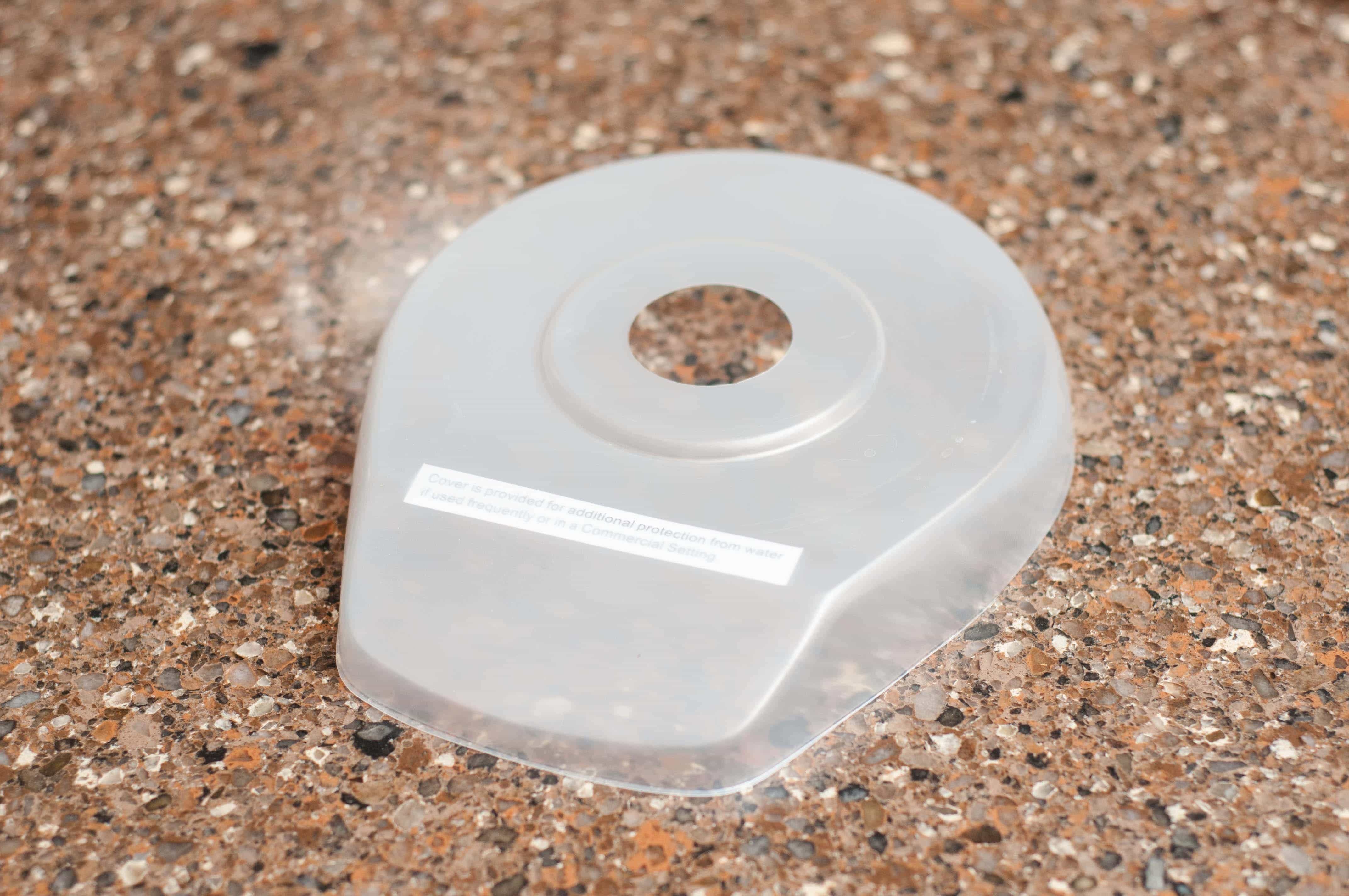 The hard plastic cover is great for a commercial setting. 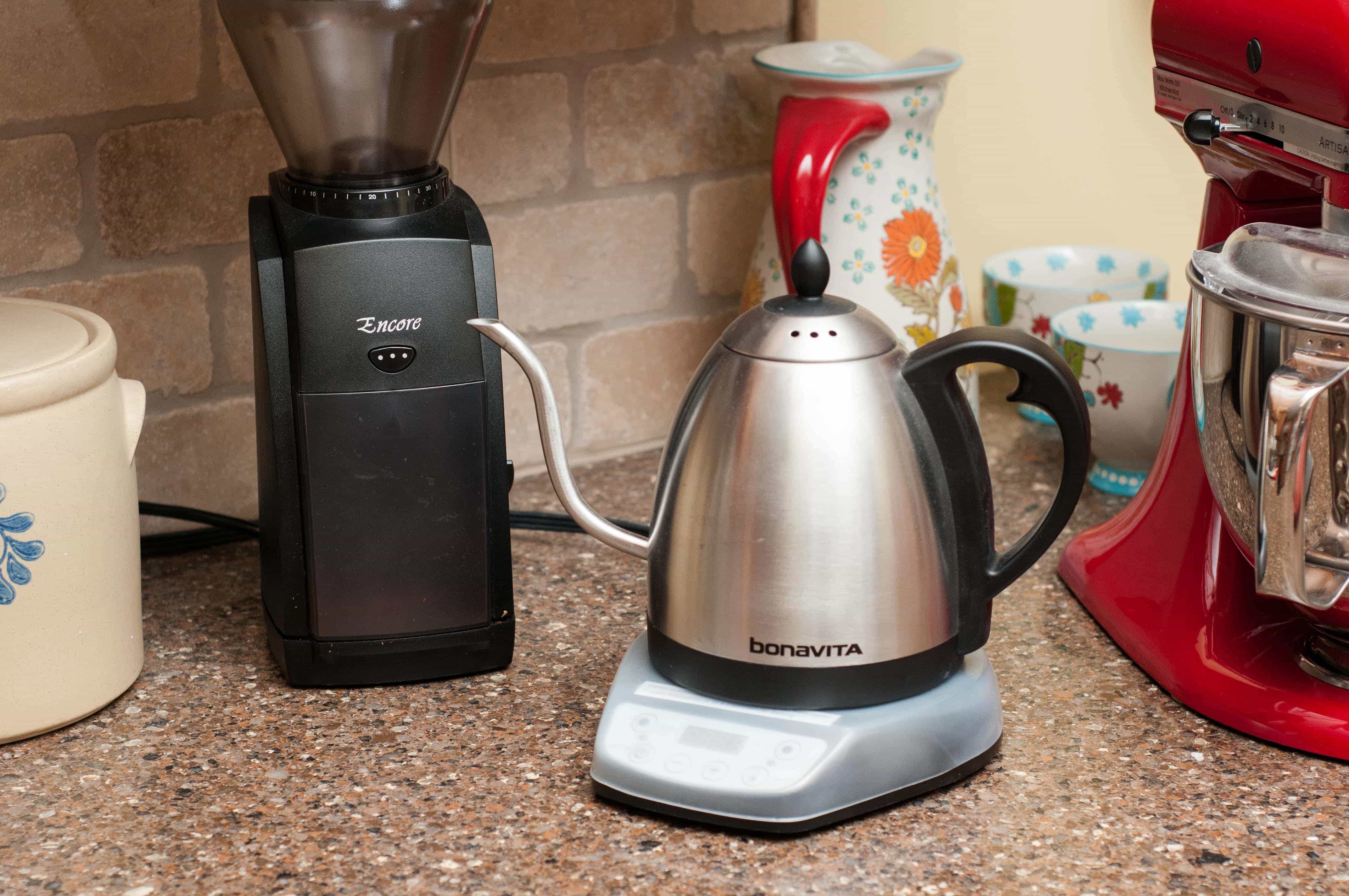 Even when nt in a commercial setting, you can leave the cover on the kettle base and everything works as advertised.

As great as the variable-temp kettle is, there are a couple areas where it could improve, and only slightly at that:

Neither of these are dealbreakers by any means, but worth mentioning all the same.

The “Time to Boil” Test

Given that this is a kettle designed for both precision and experimentation, I thought it would be fitting and interesting to do my own test and see how long it takes to boil various amounts of water. Y’know, for science. 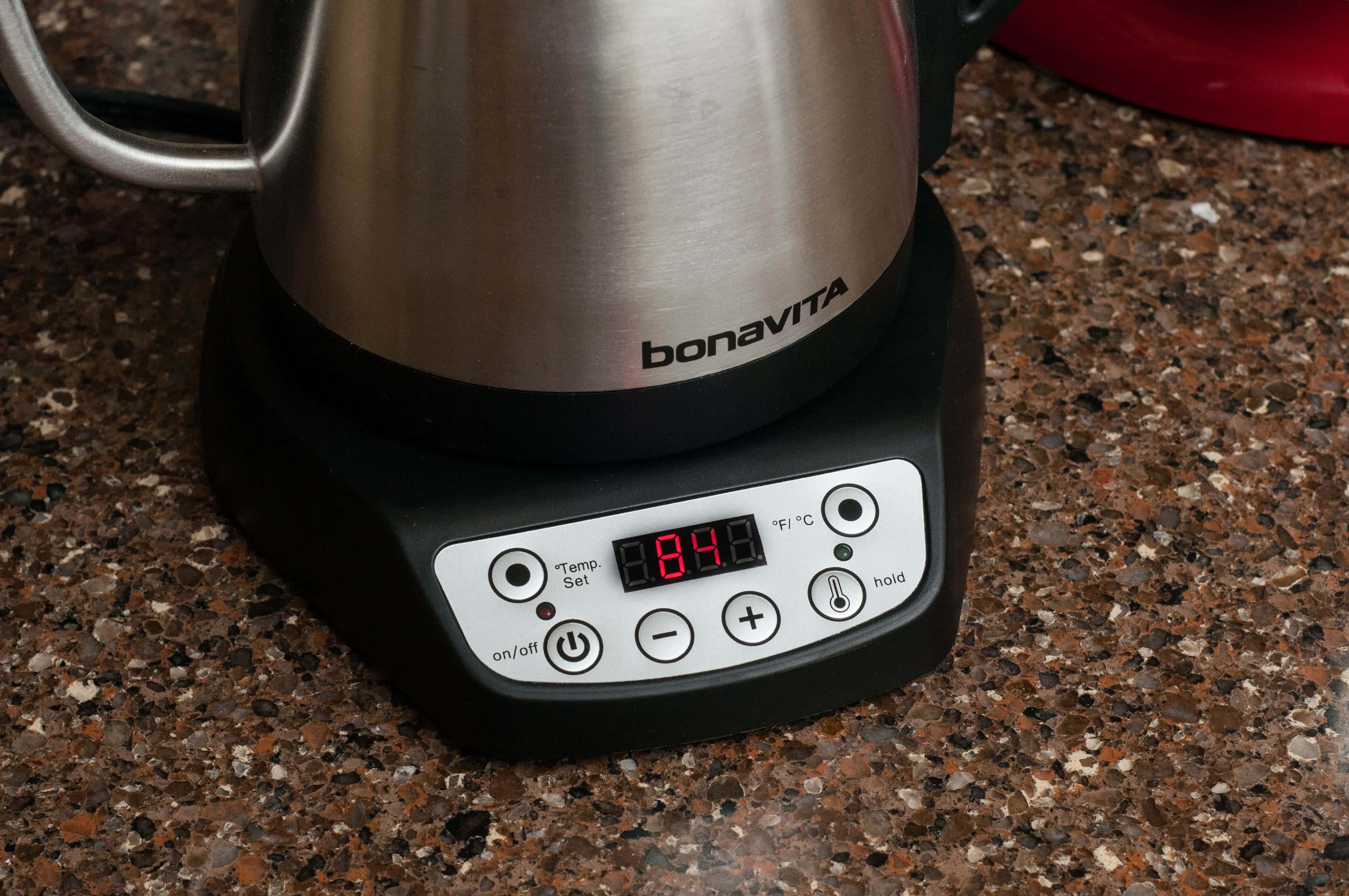 Here’s a chart with the results, using a few of the most common measurements:

A few nerdy notes about these figures:

Not the most accurate experiment in the world, but it was fun to get a sense of how long it really takes the kettle to do its thing. Even at full capacity — which I rarely require unless we have guests over — it only takes about 8 minutes to reach boil, and about half that long for a cup or two. Good to know. 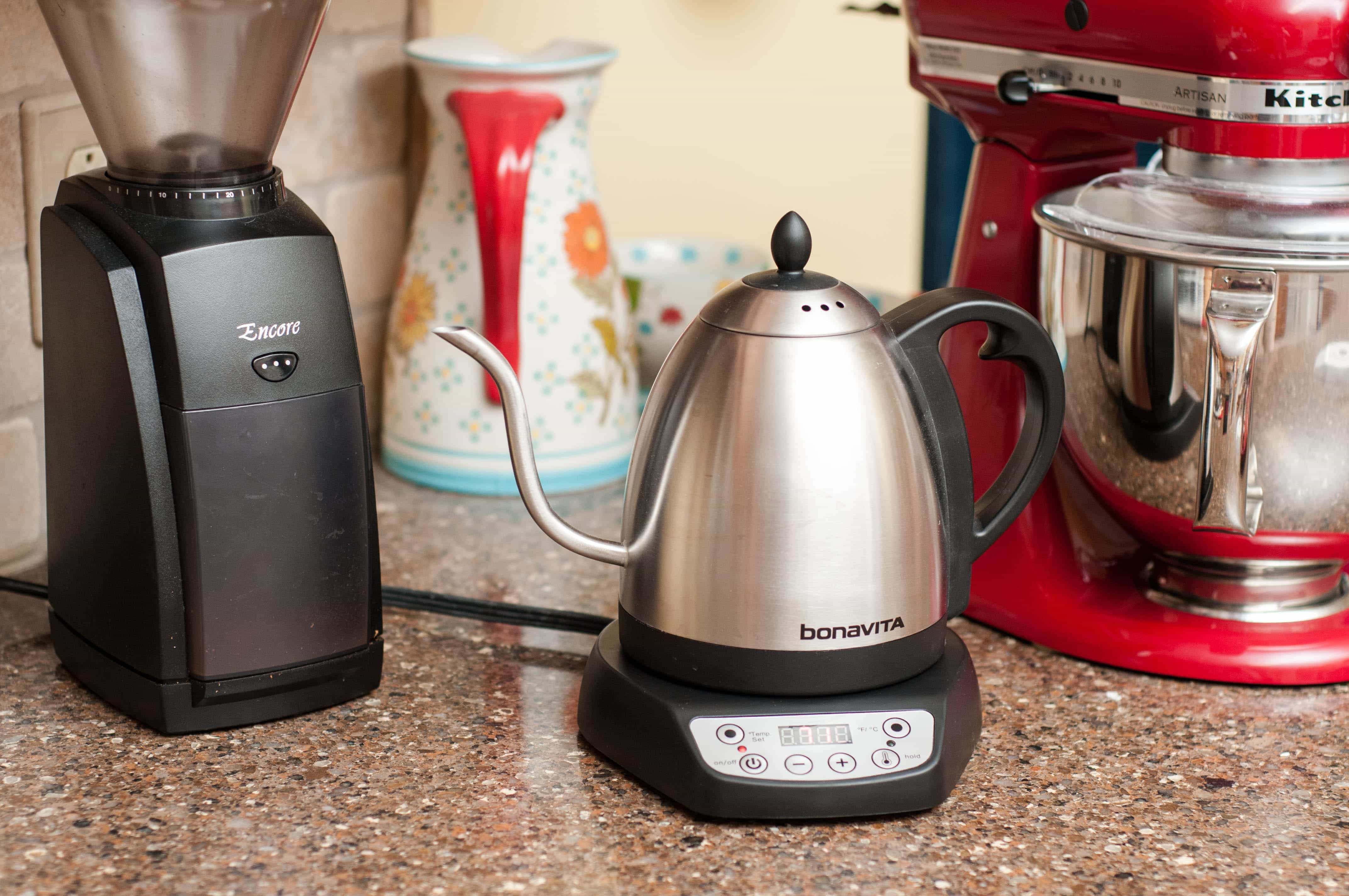 The Bonavita variable-temp gooseneck kettle is a steadfast piece of the coffee guru’s kit.

As we said earlier, if you’re a finicky coffee (or tea!) aficionado who either likes to experiment or get every cup juuuust right, Bonavita’s variable-temp gooseneck kettle is a must-have tool for your brewing kit. You’d be crazy not to get one. 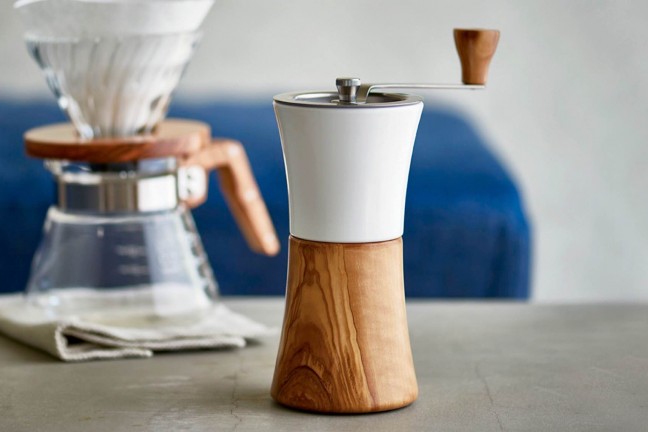 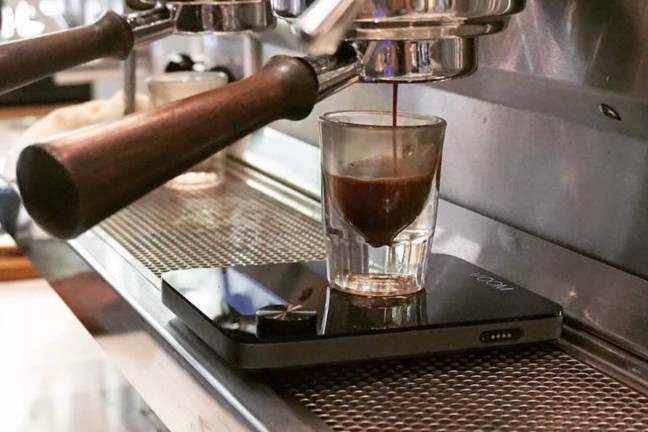 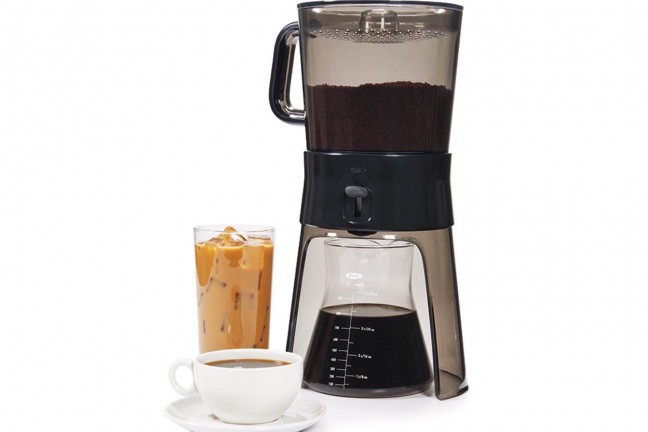