The first thing you may think of when it comes to headphones or earbuds is the sound.

I’d argue that equally important, if not slightly more so, is comfort. With the potential to listen for hours, having something comfortable on or in your ears will allow you to fully enjoy the sound you’re hearing. This is why, on the surface, Normal earbuds ($199) are so interesting. The custom-fit, 3D printed earbuds are made to fit each person and should be the perfect-feeling listening experience.

The Normal earbuds are also exciting because earbuds could be one of the first places consumers see 3-D printing come into their lives in a real and tangible way. Now, with a pair of Normal earbuds in my ears I can see if they’re the promised land of personal audio and whether they’re worth the $200 entry fee. 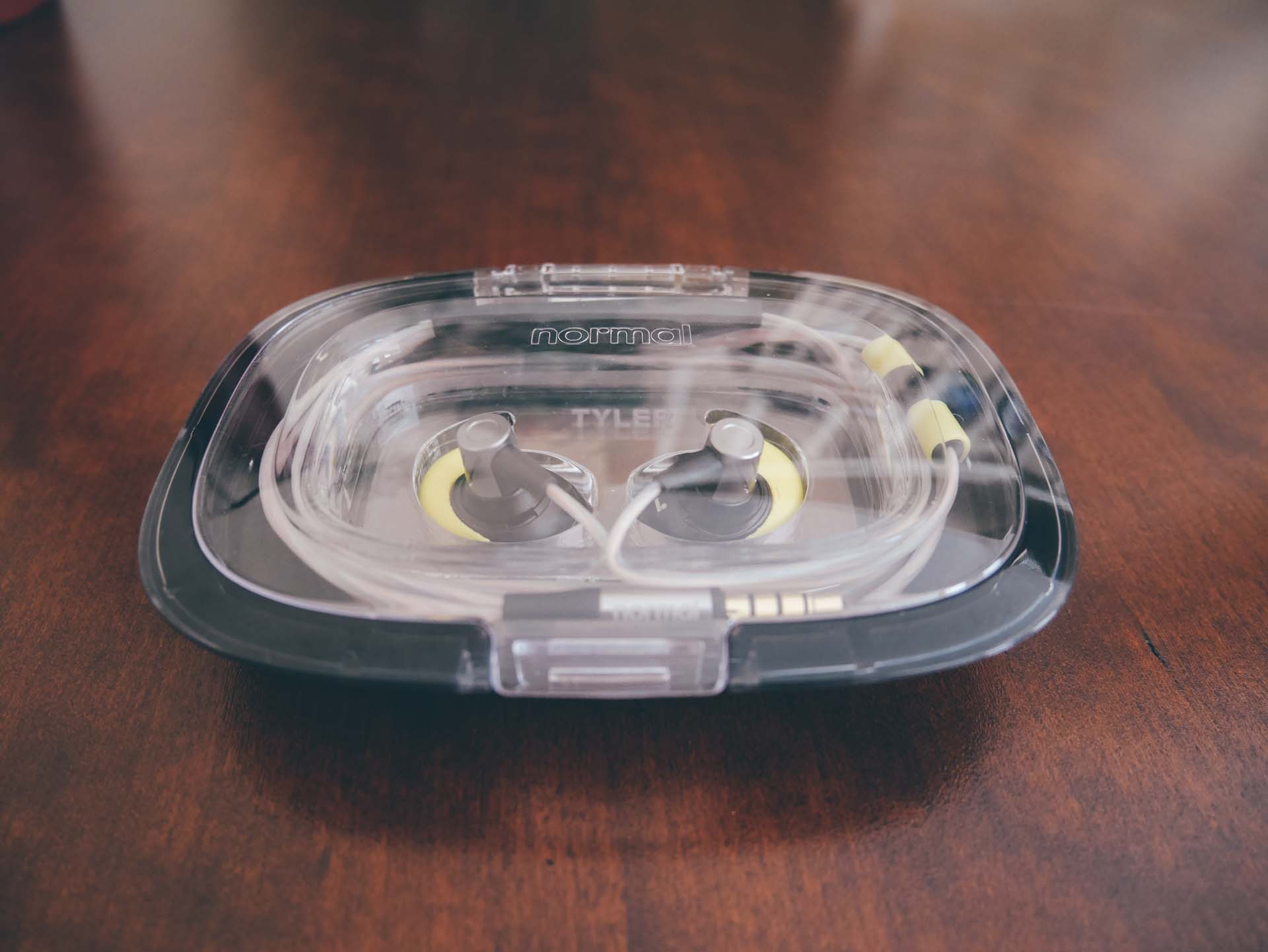 The Normal Earbuds. 3D printed to perfectly fit your ear.

Just to clarify, the entire Normal earbuds aren’t 3D printed, just the colored portion. The speaker, which points into your ear, is universal across all configurations. But, unlike the Apple EarPods which have a similar directional speaker pointed into your ear, Normal’s 3D earpiece is supposed to create a more snug and secure fit.

These are advertised as custom fit earbuds, but they’re not the same as earbuds custom molded to your entire ear by any stretch of the imagination. For some people that might be a plus. Fully custom molded earbuds have a lot of quirks that might not work for some people — including the feel of something going so far into the ear or the dramatic sound isolation that often accompanies these types of earbuds.

Starting at the beginning, part of the experience of Normals is ordering them. The entire process happens in a mobile app. The first thing you have to do is take pictures of each ear which the company will use to model your ear and print the 3-D portions of the earbuds. Because you’re holding a quarter next to your ear for perspective, taking the guided pictures feels like trying to beat a level of Super Mario on the first try — tricky, but not impossible.

I ended up having to do the picture taking process twice. Taking the 10 pictures of each ear is hardly an invasive process, but it can be a bit frustrating if for some reason you can’t quite get it right. No matter how easy or difficult you find it, this part shouldn’t turn someone off from ordering a pair of Normals.

Once you take the pictures, you get to further customize your earbuds with colors and cable length. You’ll also get to pick the name you’d like etched on your earbuds case. The app is really well done throughout. Considering it’s the only way to order — other than visiting the New York City shop — it does itself justice.

After that point, it’s a waiting game. Luckily you shouldn’t have to wait long. After submitting my order, I was trying my earbuds on in less than 48 hours. Since you can’t go to a Best Buy and pick up a pair of custom fitting earbuds, it’s nice that they come so quickly. 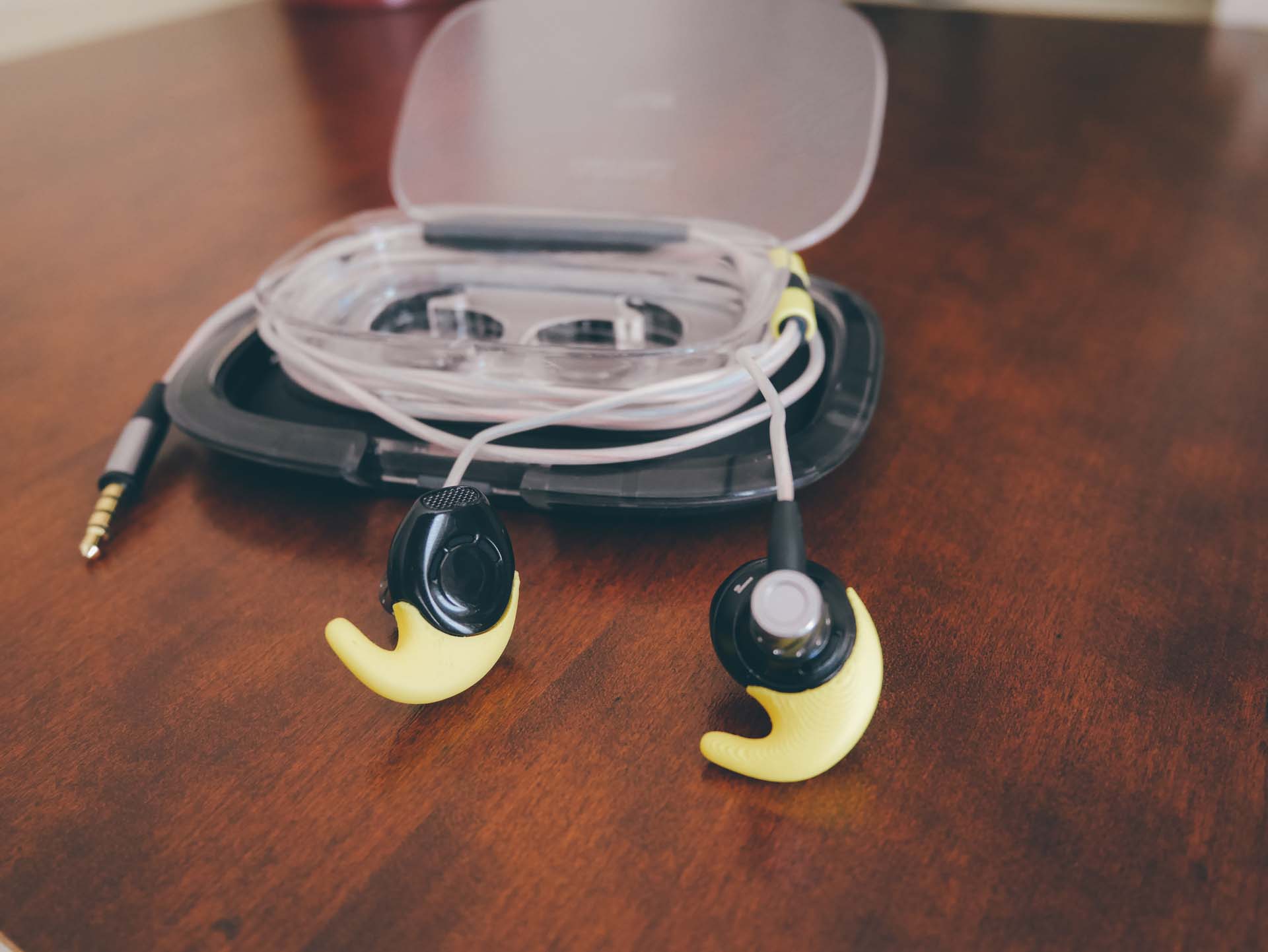 When I first got my pair of Normals, I instantly tried them on only to find the left ear didn’t fit quite right. It was a huge bummer for sure. Something with the 3-D printed portion must not have been right because the plastic speaker angled down ever so slightly and poked sharply into my skin (inside my ear).

I tried for a little bit to get them to work because I didn’t want to have to send them back. Finally, I admitted they weren’t going to work and hit the button inside the app that said, “Exchange/Return.” I promptly received a shipping label and within 20 minutes received an email from a human asking for another picture of my ear with the earbud in so they could fix the problem and reprint them. I sent the picture and later got an email that the new pair was on the way. I received the new pair of Normals the next day before 10:30 am.

As an aside, I’ve dealt with a fair amount of customer service and Normal’s was definitely great. I didn’t get passed around and the exchange was extremely quick and efficient — even delightful.

For me, the Normal earbuds needed to best the Apple earbuds as a bare minimum. The cheap white earbuds are my go-to pair for when I’m in transit, in and out of the car, or grocery shopping — all periods of in-between. I find Apple’s EarPod design pretty comfortable for what they are, and they’re extremely easy to take in and out if talking to someone. They’re probably my most used ones, so if the Normals can be that go-to pair and provide better sound, I’ll be satisfied.

The second pair I received fit better, but they weren’t perfect. After trying them for a few days, the issue became clearer. There was no longer any sharp poking, but the top curved part applied too much pressure and I couldn’t keep them in longer than ~30/45 minutes. I hesitated to say anything because it was hard to tell if it was the style or if the size still needed to be adjusted. After a followup email from the same person that helped with the first exchange, I did end up asking about it.

Now on my third pair, the earbuds finally fit well. They go in easy and aren’t noticeable once they’re there. At this point I’m fulling willing to admit that I may have more sensitive ears than most people, so the same issues may not have affected someone else. 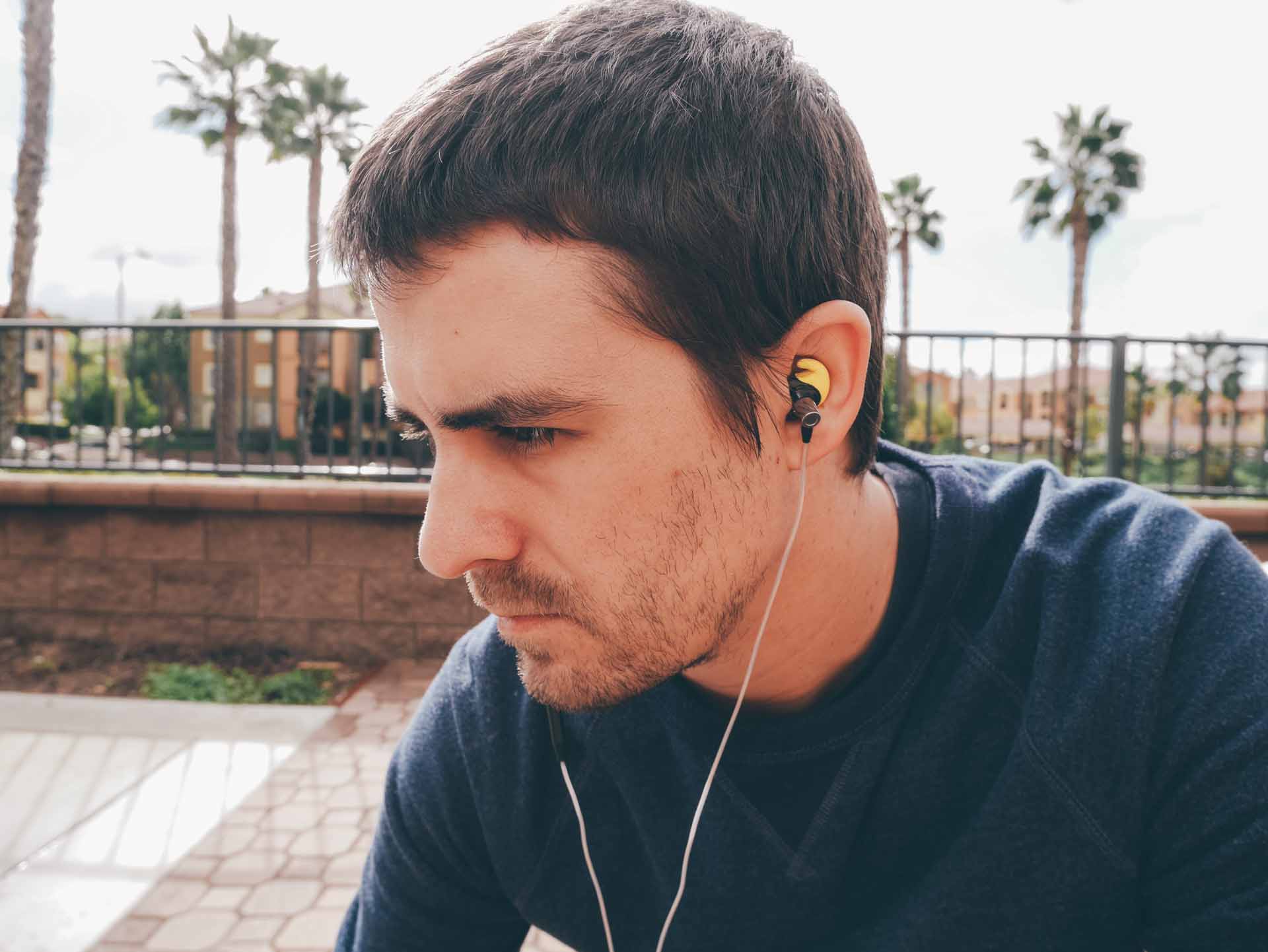 Wearing the Normal earbuds. As you can see, the custom fit isn’t for the inner-ear canal (like a custom molded in-ear monitor), but rather for the outer part of the ear to help hold the Normals in place.

When I walk around, the earbuds don’t slide out of place. But I wanted to try them running even though I don’t typically run anymore. I took a Nexus 5 loaded up with Randall Munroe’s book What If?, and went running. Interestingly, the earbud’s controller only worked with play/pause in the Audible app. Both the volume and double clicking to skip tracks only worked on my iOS devices.

At a moderate pace — I can’t stress moderate enough — the top curved part of the earbuds came loose pretty quick. They never fell out or felt like they would, but the top part wouldn’t stay locked in. This is almost certainly because of the smaller resizing due to the pressure they caused previously. Otherwise, they worked well. Consider this running experiment strictly anecdotal. While I wouldn’t use it to judge the product one way or another, it was my experience.

Beyond comfort, the second most important thing is the sound of the earbuds. Compared to other earbuds I’ve tried, including the Westone single-driver, Shure SE215, a-Jays Five, and others, the Normals sound good — definitely in the same ballpark. I could be wrong, but my feeling is that the actual audio quality of the Normals is equivalent to a $80-$100 pair of earbuds. The extra cost you’re paying provides the benefits of 3-D printing, fast shipping, and fantastic support. Again, just my gut feeling.

I used the earbuds for streaming a few songs at different bitrates, including 192, 320, and 1141 kbps. The bass isn’t especially tuned to hit hard unless a song is mixed that way, but the earbuds can handle it. Otherwise the audio tends to be pretty flat. This really depends on your preference, but overall I’d consider this a good thing. Whatever music you’re listening should sound as it was designed to sound. The earbuds aren’t a distraction when listening to music or podcasts.

Streaming Ben Howard’s song “Small Things” at 192 and 1141 kbps, I could hear a difference using the Normals. I couldn’t hear an imminently noticeable difference at 320 kbps and the higher quality, though I wouldn’t doubt someone who said they could. I also think it takes pretty high-end equipment for most people to hear a difference in the two bitrates — if they can at all.

For their price range, the Normals perform well. They aren’t astounding or unbelievable, but I’m happy with the sound quality. 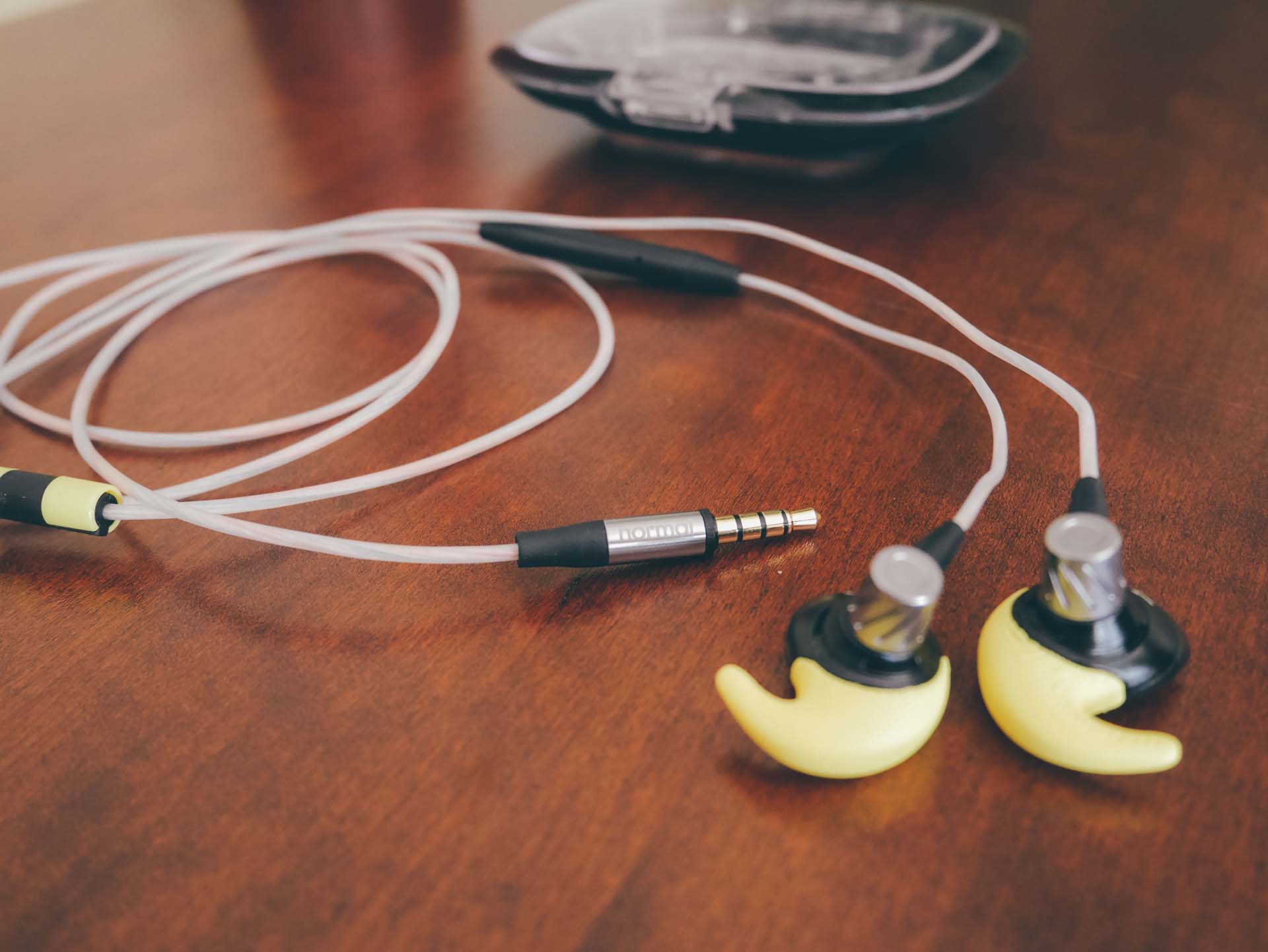 I’ve never found a pair of silicon earbuds I liked. Most the time, even with different sized tips, they just fall out — especially from my left ear. It’s annoying. Foam-tipped earbuds are better, but still far from perfect feeling. I love my custom-molded Ultimate Ears, but because of the crazy passive noise canceling I can’t wear them everywhere. I feel like I’m eternally in search of the holy grail of earbuds. The Normals, however, aren’t it either.

After a few days, the Normals have replaced my Apple EarPods for my go-to pair. It’s a role I wouldn’t give to any earbuds, but it’s hardly a glowing outcome for a $200 pair of earbuds. The hesitation I have is, I personally don’t care for the specific style of snug fit. You’ll have to decide whether the ear filling curved plastic is a plus or minus similar to Bose’s TrueSound in-ear headphones.

Truth be told, I don’t think the Normals are for everyone, but there will be people that absolutely love them. As much as I’d like it to be cut-and-dry, it’s not because of the unique customization. The only real issue I have with the Normals is the process for its ear model — for 3-D printing.

Now on my third pair of earbuds, the fit is good, but it’s not 100-percent perfect. I don’t feel any more affection for the comfort than a correctly-sized foam tip, other than they are quicker to put in and pull out.

I understand the appeal of making the ear capture process as simple as possible, but it leads me to believe all the kinks may not be worked out yet, or that 10 pictures for each ear might not be enough. In contrast, a similar and recently funded crowdfunded project from Ownphones will use short video clips to create ear models for 3-D printed consumer earbuds. Maybe there’s something else Normal can do to get the perfect model of someone’s ear every time? Either way, I think if this is an issue (maybe it’s just me), it can easily be upgraded by the company without major hiccups.

Should you get a pair of Normal earbuds? If the proposition of trying to get the perfect sized earbuds excites you, then yes, try them. Especially because if something is wrong I have no doubt you’ll be taken care of.

It’s just not a blanket recommendation because these earbuds aren’t the promised land of personal audio — yet. 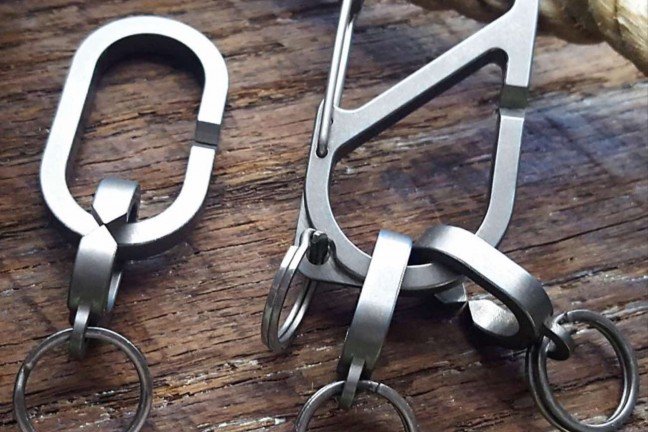 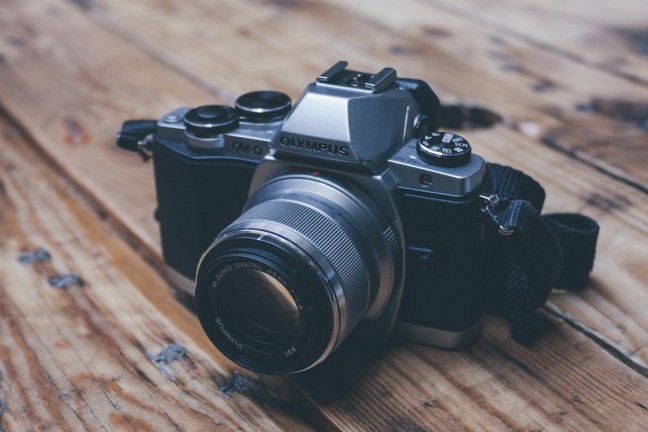 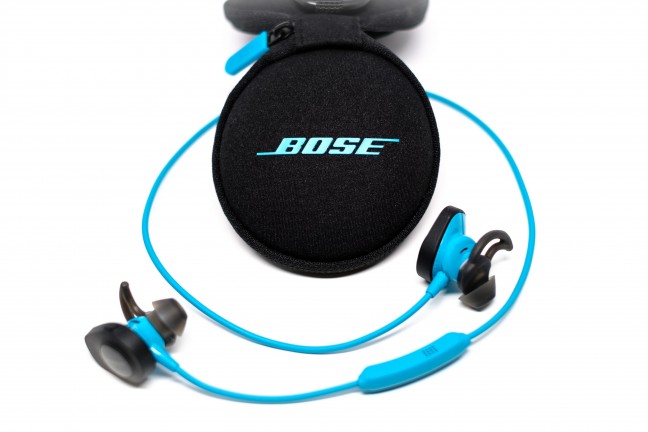 A Review of the Bose SoundSport Wireless Headphones