Lots of talk has centered around the size of the iPhone 6 Plus. The 6 Plus is often too big for a front pocket on its own, let alone with an added case or battery pack. 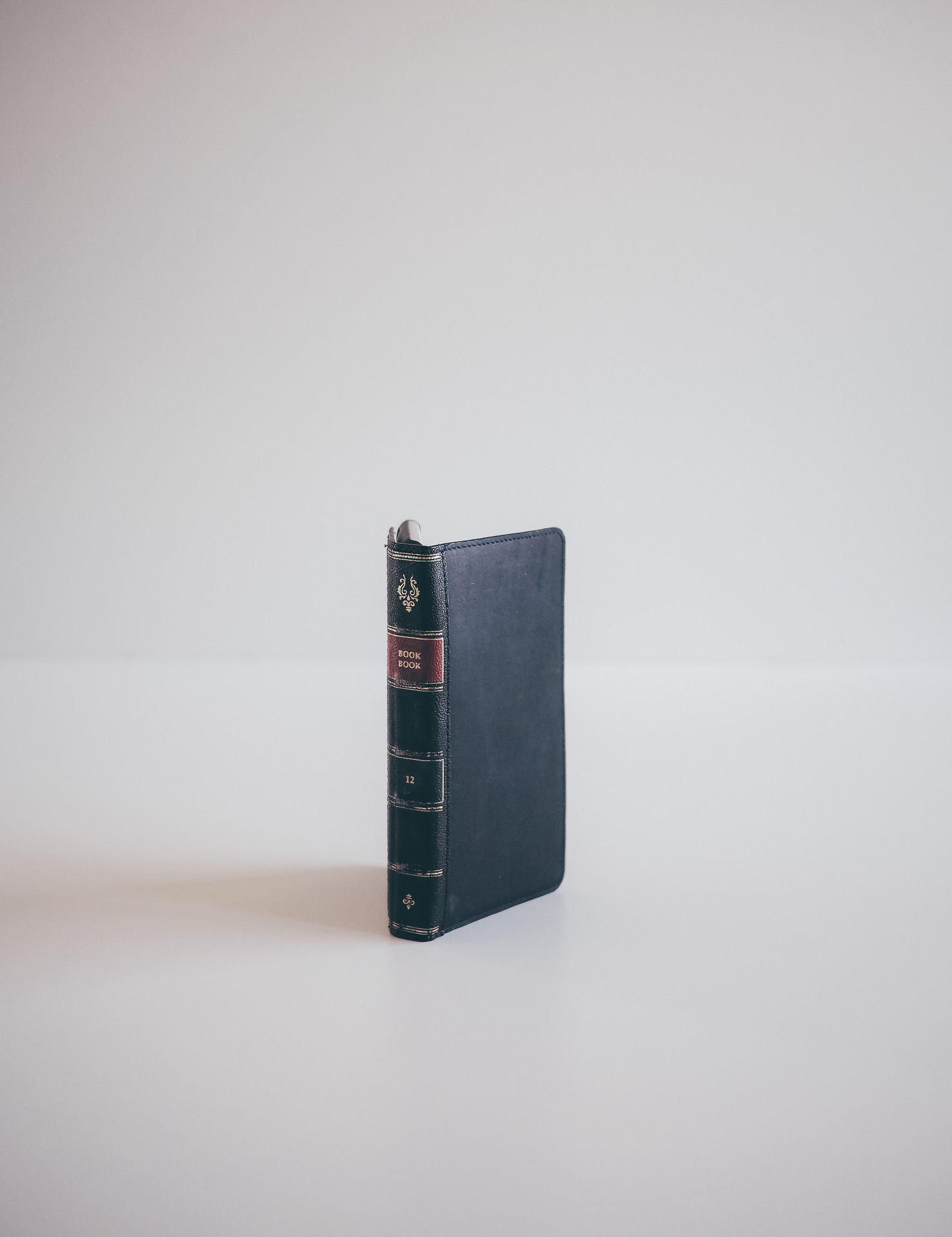 The BookBook for iPhone 6 Plus.

Yet still, the Twelve South BookBook for iPhone 6 Plus works. It adds bulk to an already big phone, but it doesn’t change how you carry your phone. Sliding the BookBook into your back pocket is not much different than sliding a leather Field Notes cover in your pocket. And best of all, you can carry all the cash, cards, and gift cards you’ll ever need all in one case. 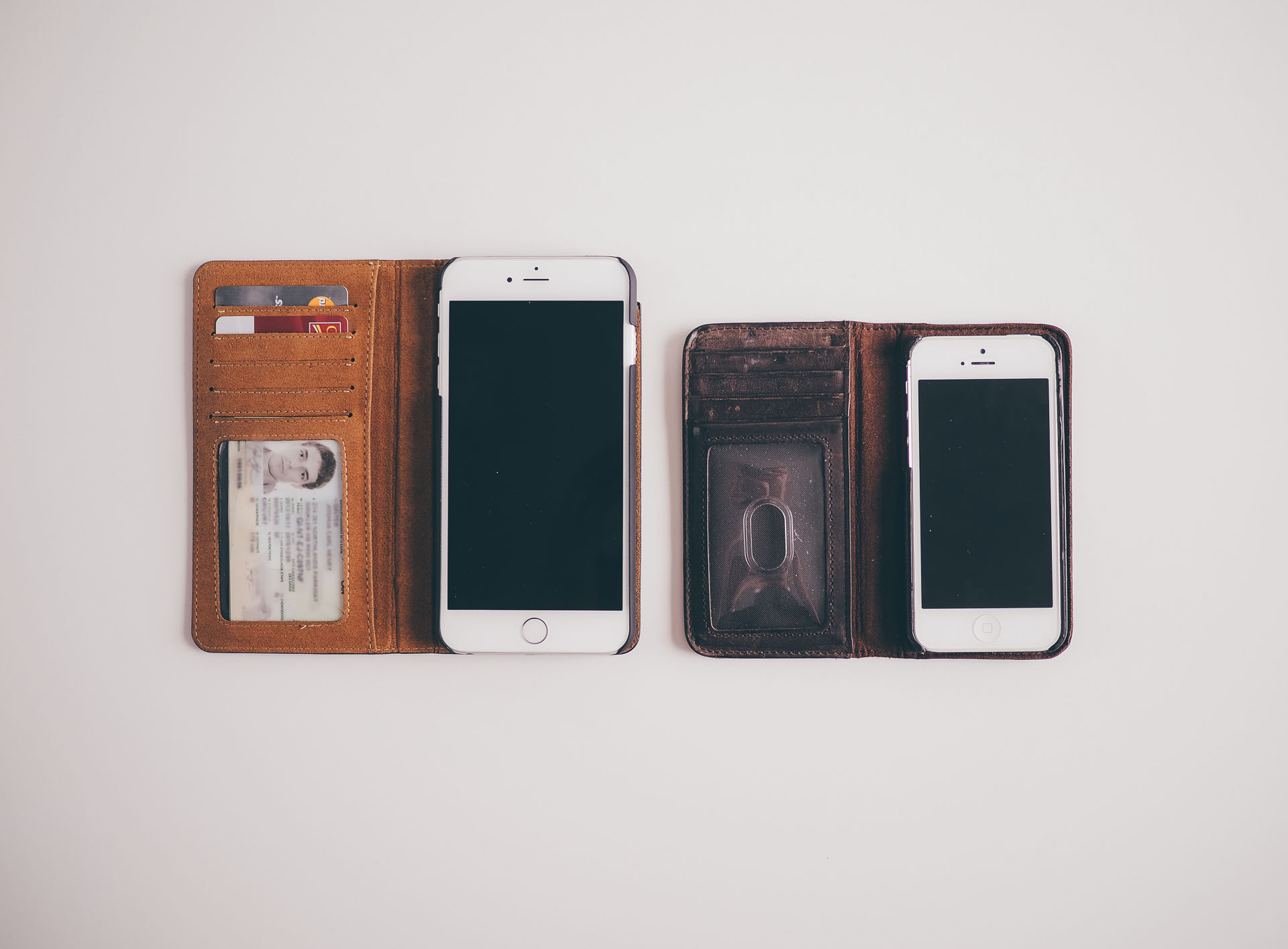 I’ve been a long time user of Twelve South’s BookBook cases. I bought a BookBook for my iPhone 5 as soon as they were available and I carried my iPhone 5 in that case for almost the entire time I had the phone. Carrying my entire everyday-carry collection in one case is hard to beat. 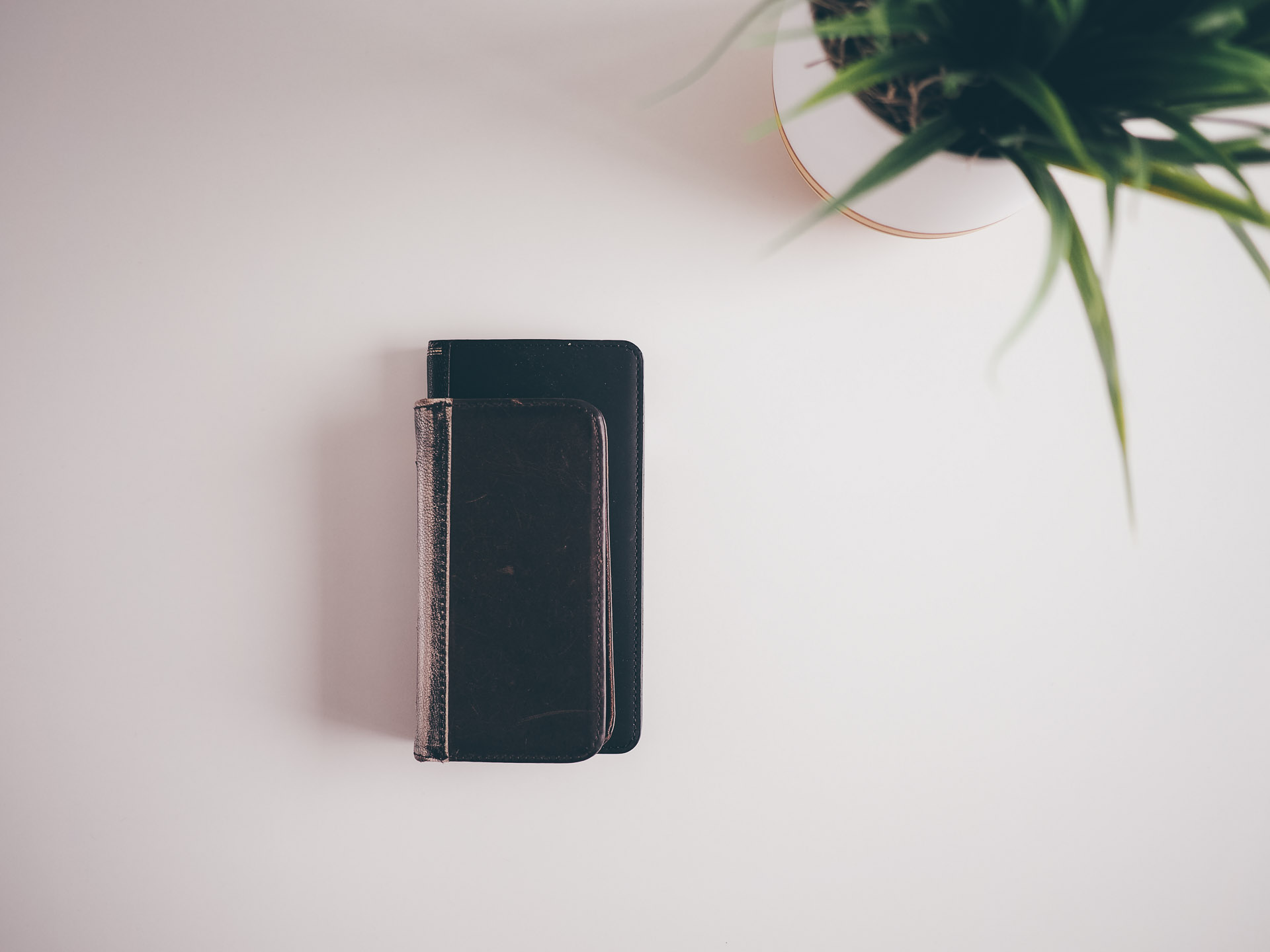 The BookBook for iPhone 5/5S was considerably smaller than the current BookBook.

But there were a few things I didn’t like about the BookBook for iPhone 5 that have been addressed in the latest rendition. First off, the hard plastic holsters for the iPhone 5 actually caused major scratches and scruffs to the phone’s chamfered edge. Second, the entire case was made of leather, meaning the BookBook had to be broken in before it was properly used. Third, I found I often removed the iPhone from the BookBook case when I was at home or at the office. As a result, there was a lot of unnecessary popping in and out. 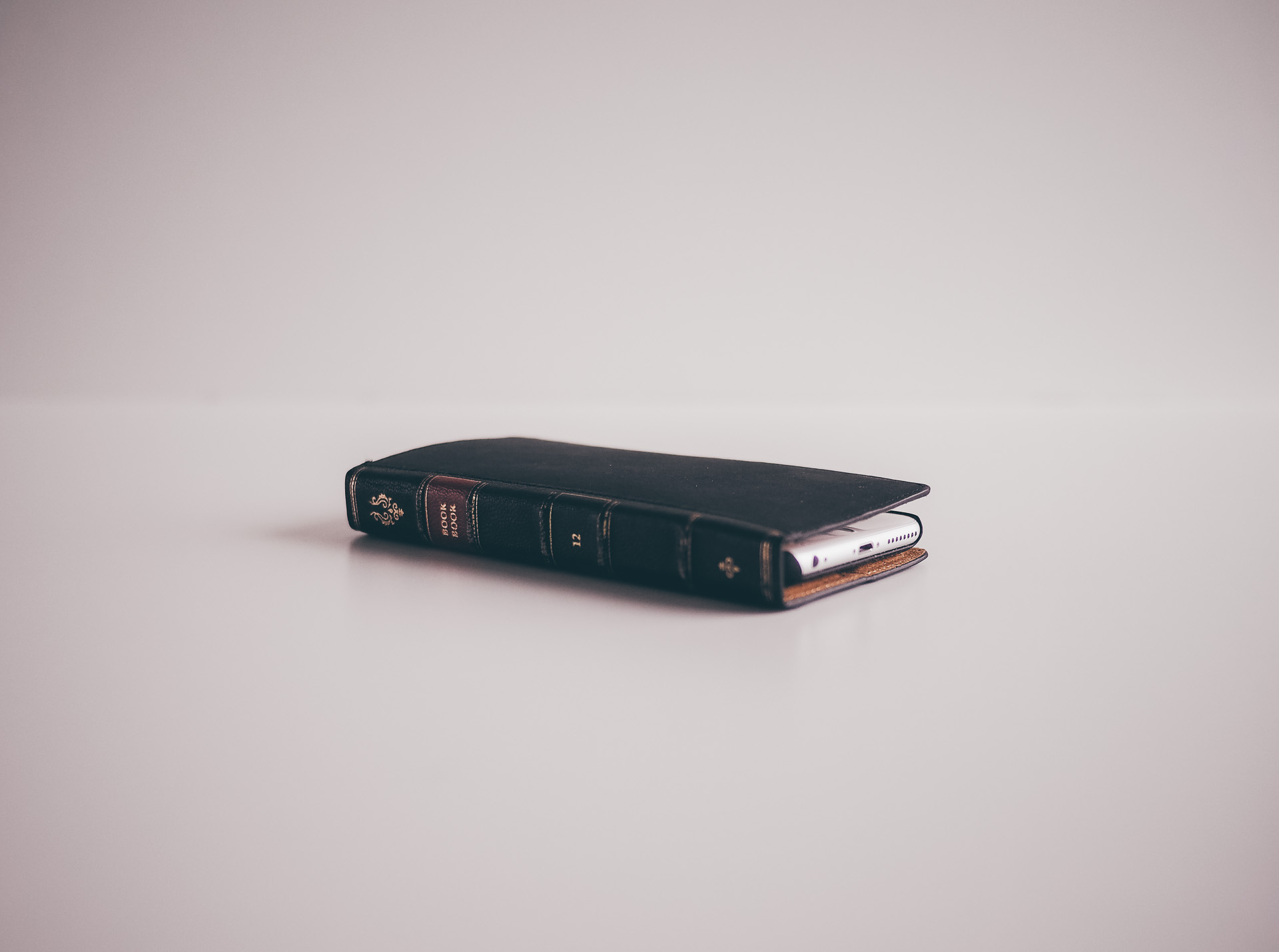 All of these factors have been addressed in the BookBook for iPhone 6 and 6 Plus and I love how Twelve South has evolved this case into more of a pocketbook than a wallet. 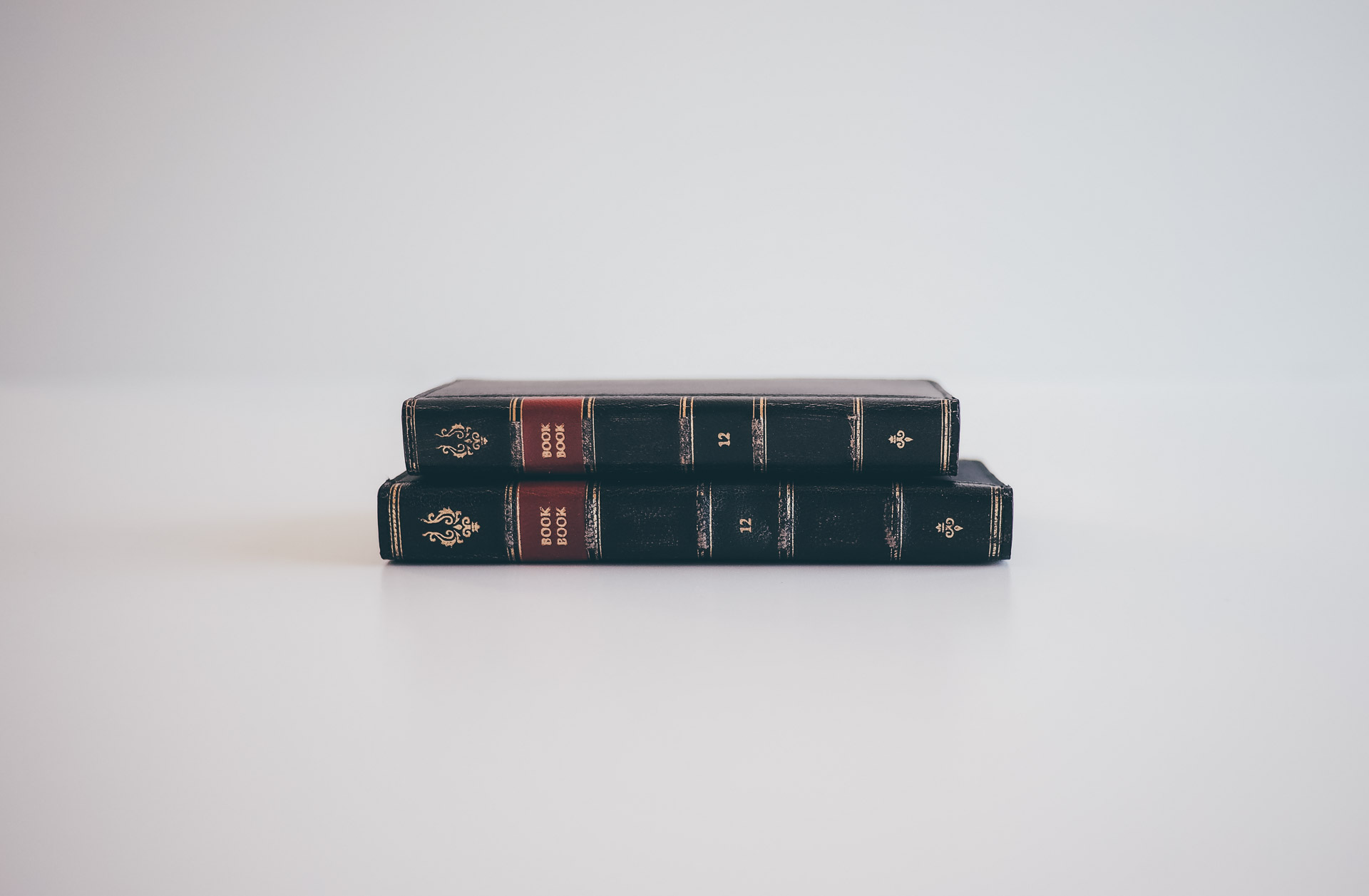 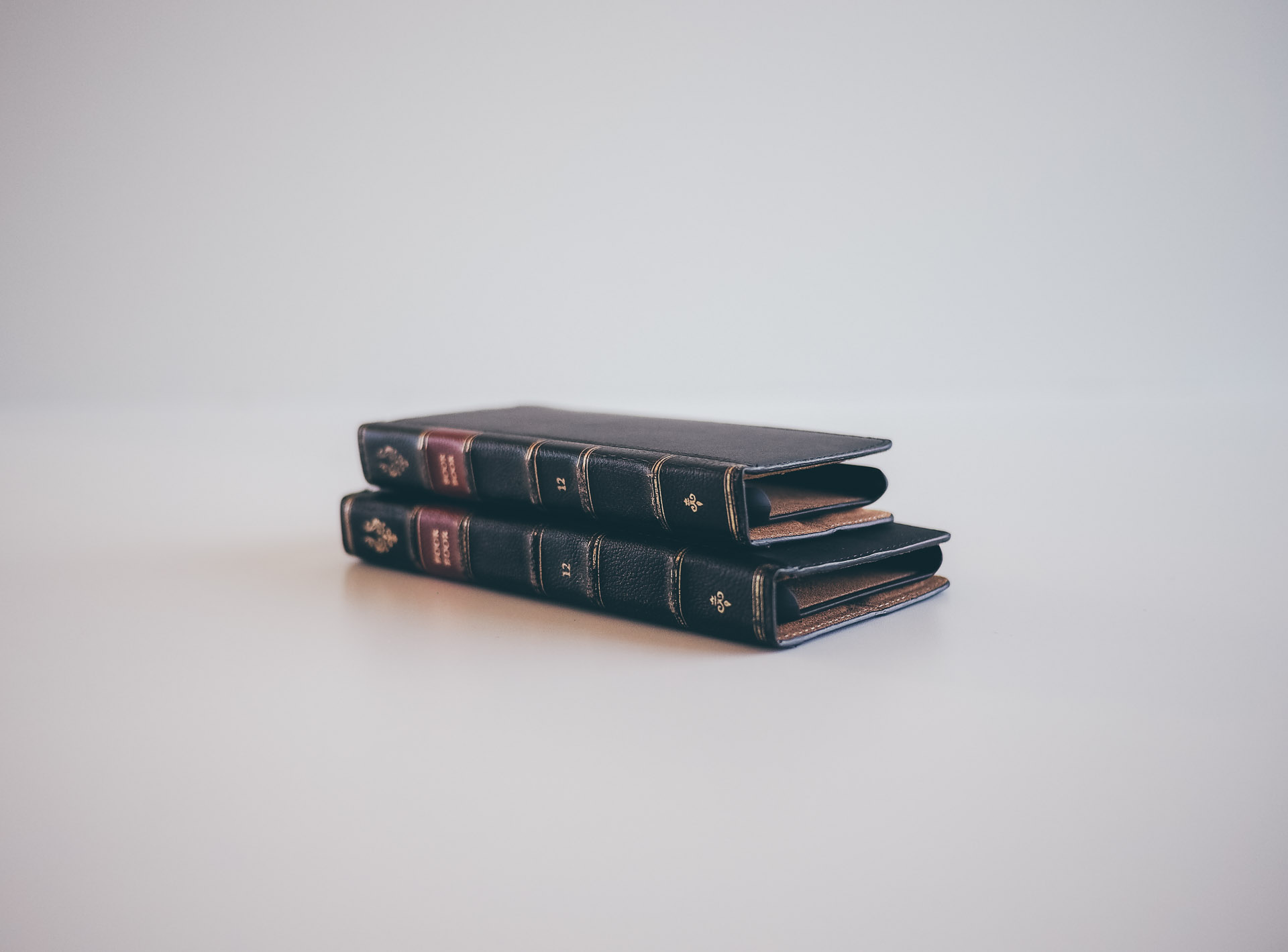 Other than size, the BookBook’s design is the same for the iPhone 6 and 6 Plus.

Right out of the box, you can feel that Twelve South chose solid leather for the BookBook. The black leather is soft to the touch and has only become more beautiful due to general wear. I chose the black BookBook this time around and I love how the back cover of the case has started to pick up the oils of every day life. I’ve always felt that black leather looks best when shiny and the black BookBook won’t leave me disappointed. 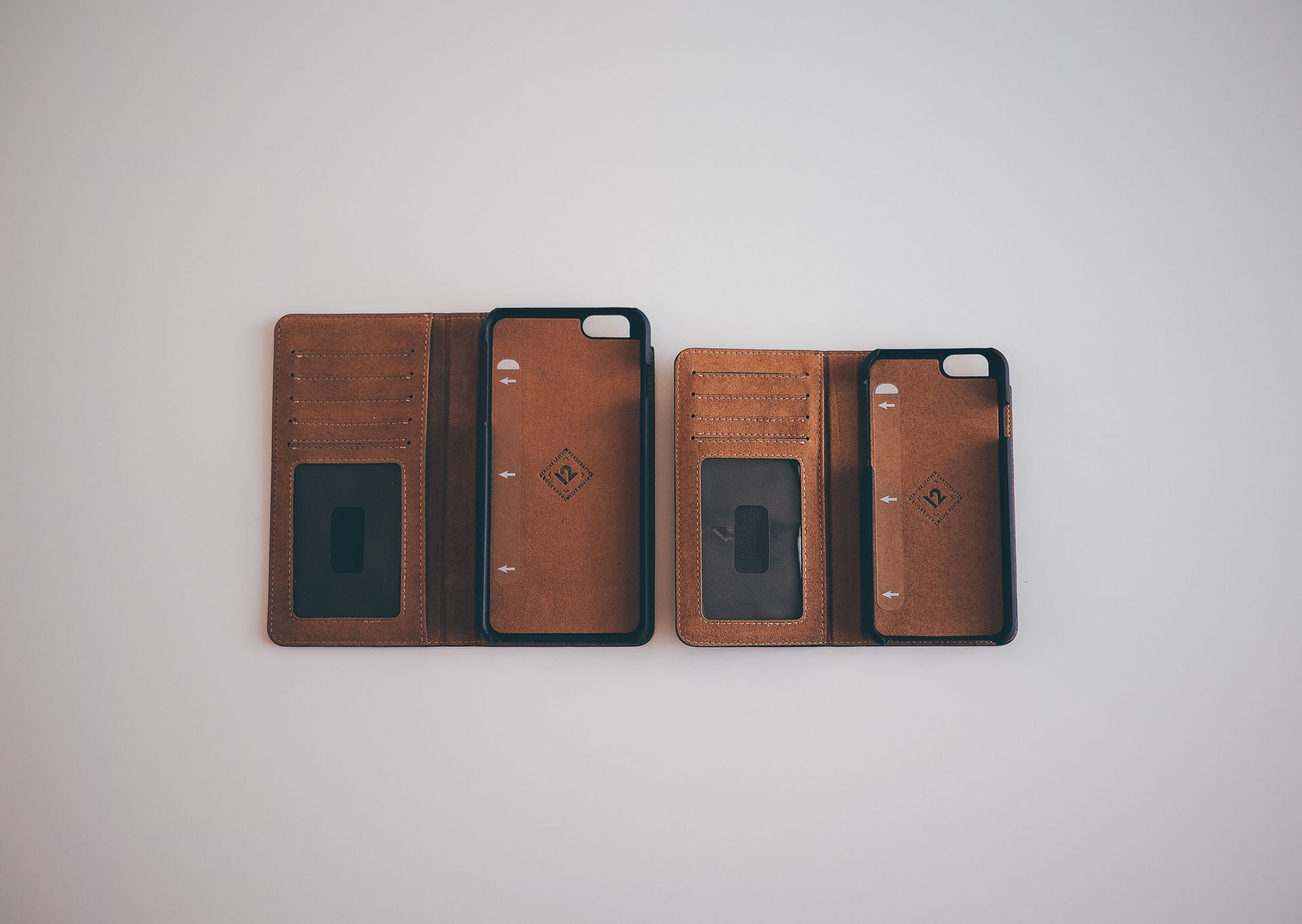 The iPhone 6 Plus BookBook has one extra card slot.

Opening up the BookBook reveals the unique shell contraption and the inner card slots. The 6 Plus BookBook has an extra card slot over the iPhone 6 BookBook and it holds more cash in its large pocket. 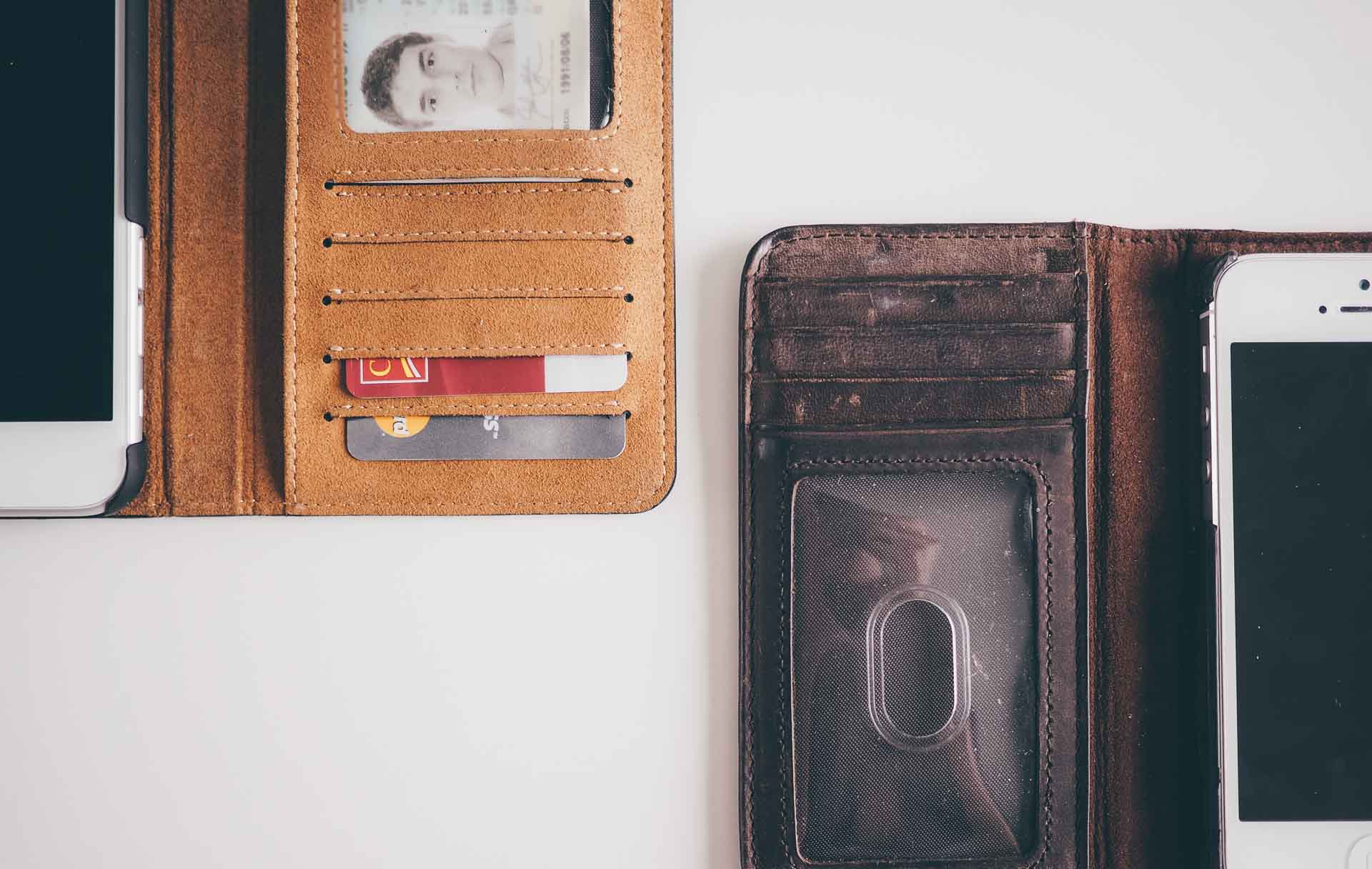 The inside material in the latest BookBook isn’t leather and is more flexible than the iPhone 5 leather version. 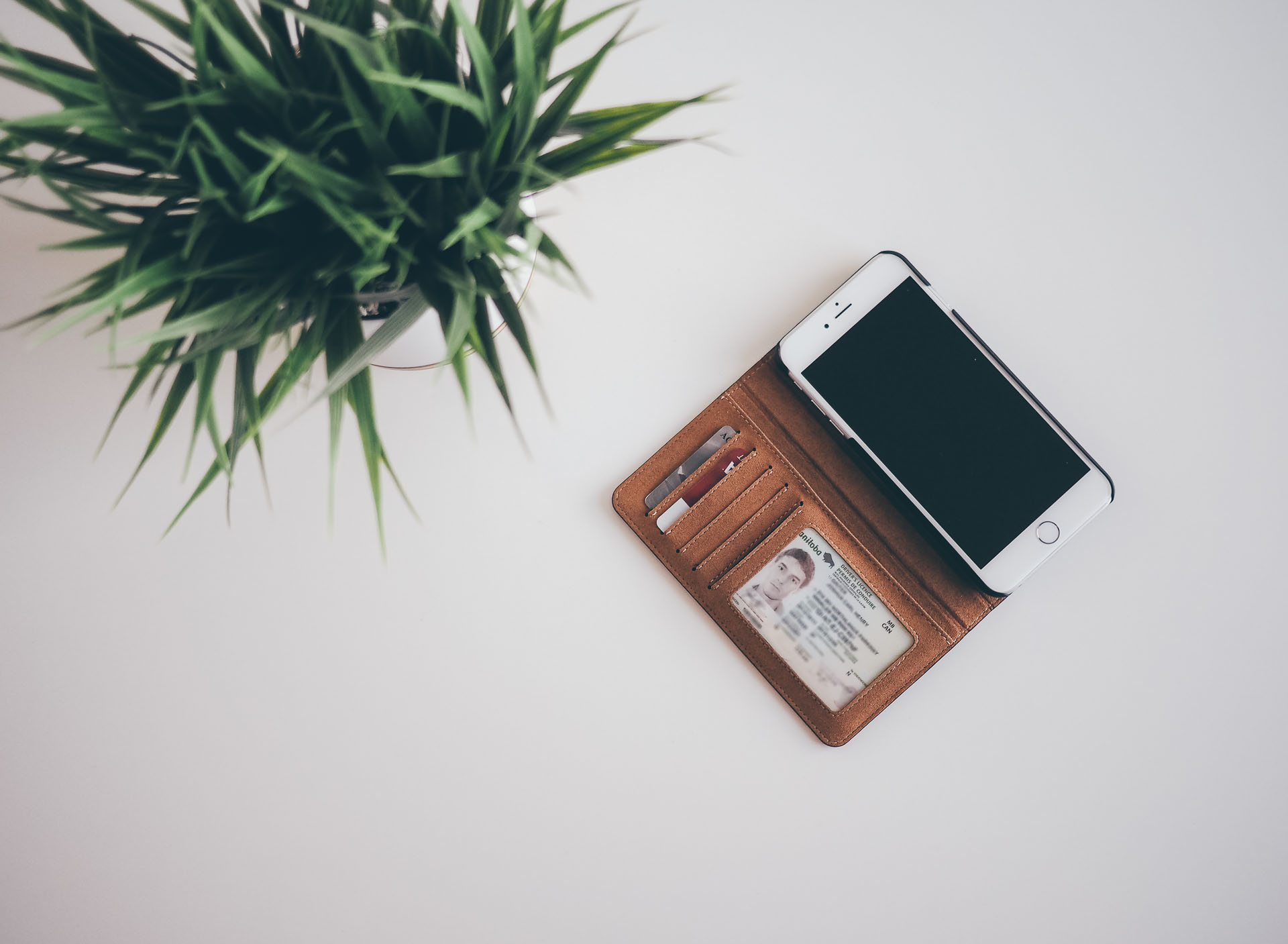 The 6 Plus BookBook can easily carry four cards plus a driver’s license in the card slots. I’ve actually slid an extra card behind my driver’s license because of the space inside. I don’t carry many cards around to begin with, so I actually have empty slots waiting to be filled. 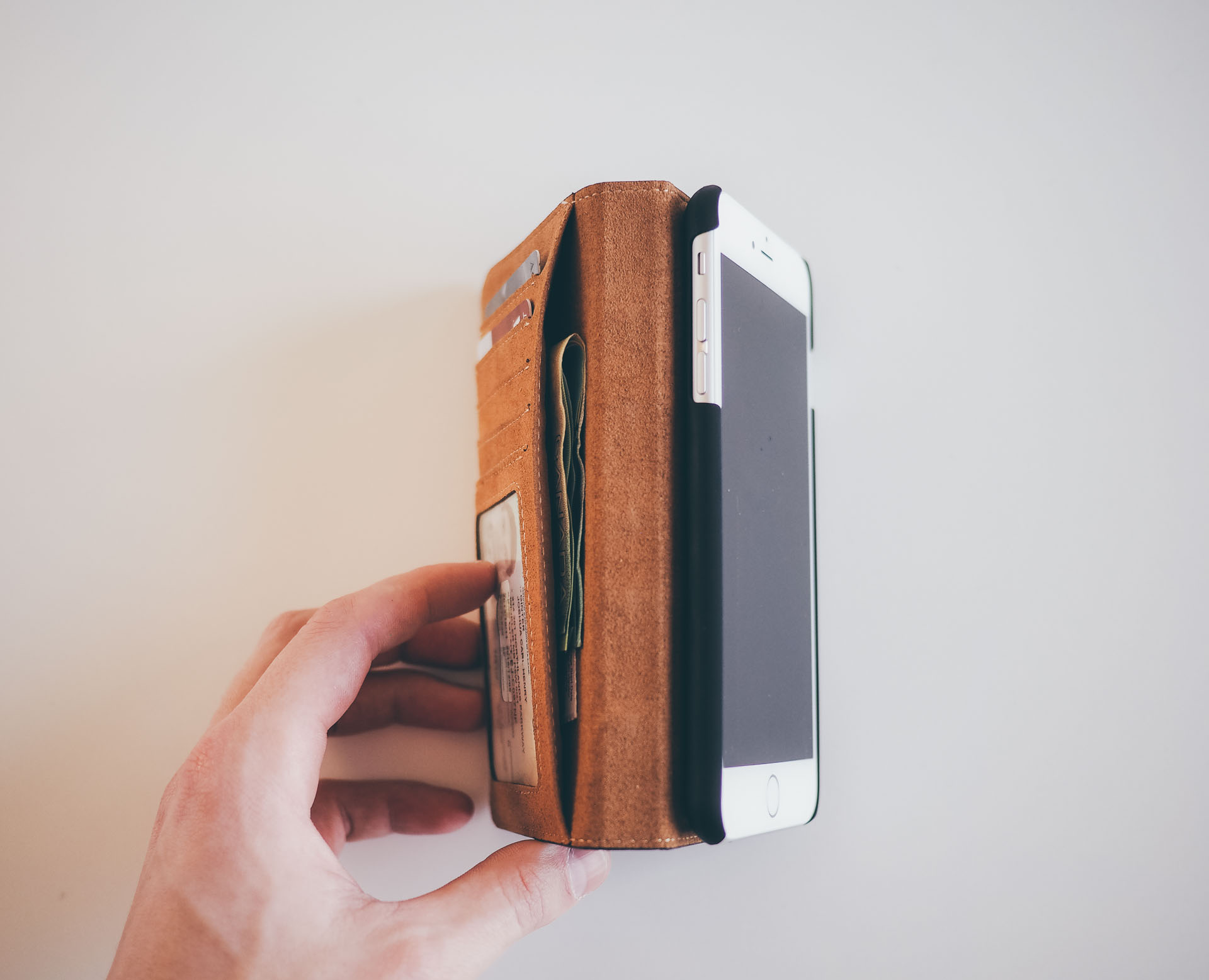 The back pocket is big enough to completely hold some cash and is easily accessible when folded over. 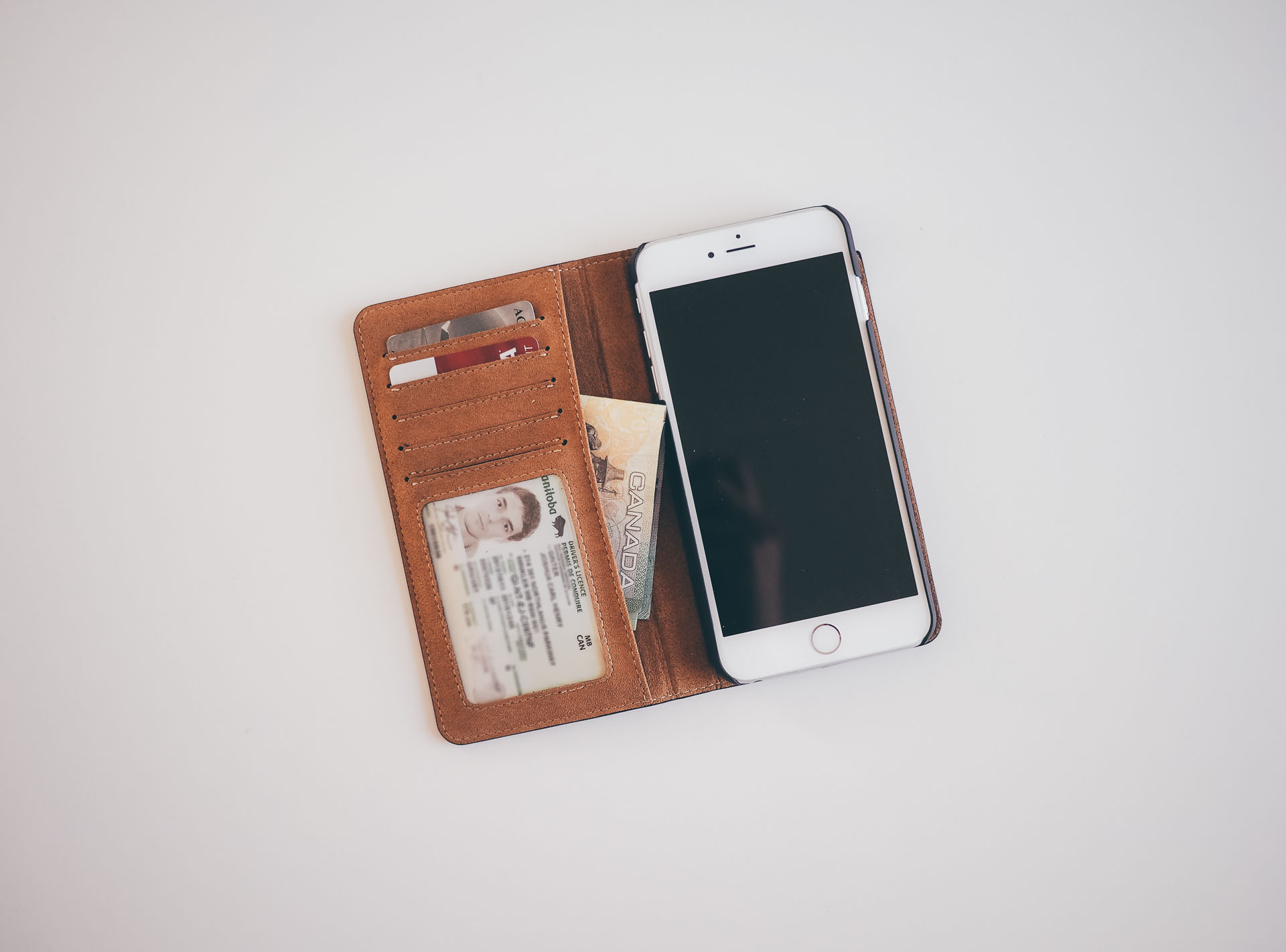 The BookBook for the 6 Plus is big enough to hold Canadian cash. 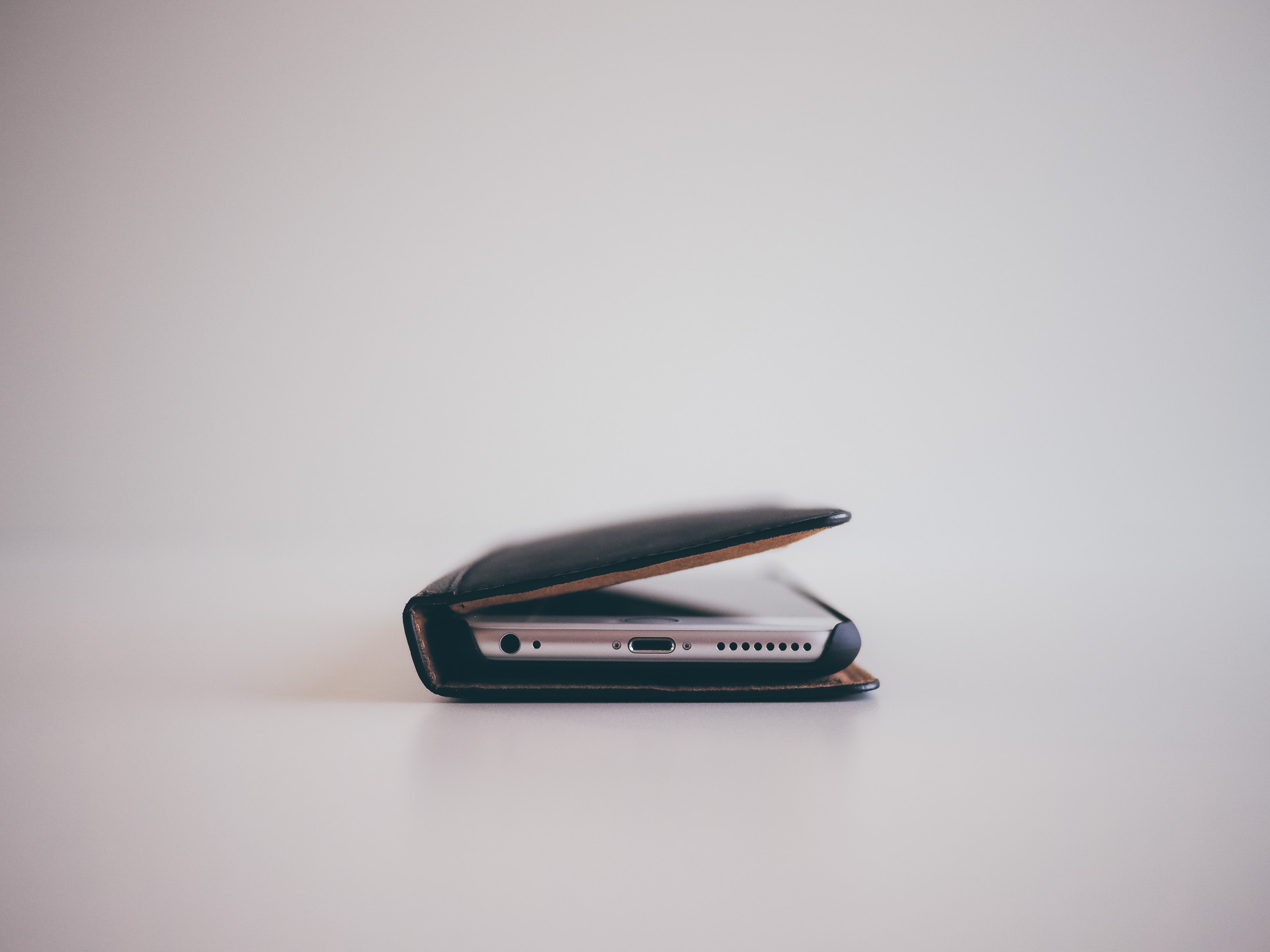 Stuffing large wads of cash in the back pocket does cause the BookBook to not close entirely, but this is still a massive improvement over the BookBook for iPhone 5. 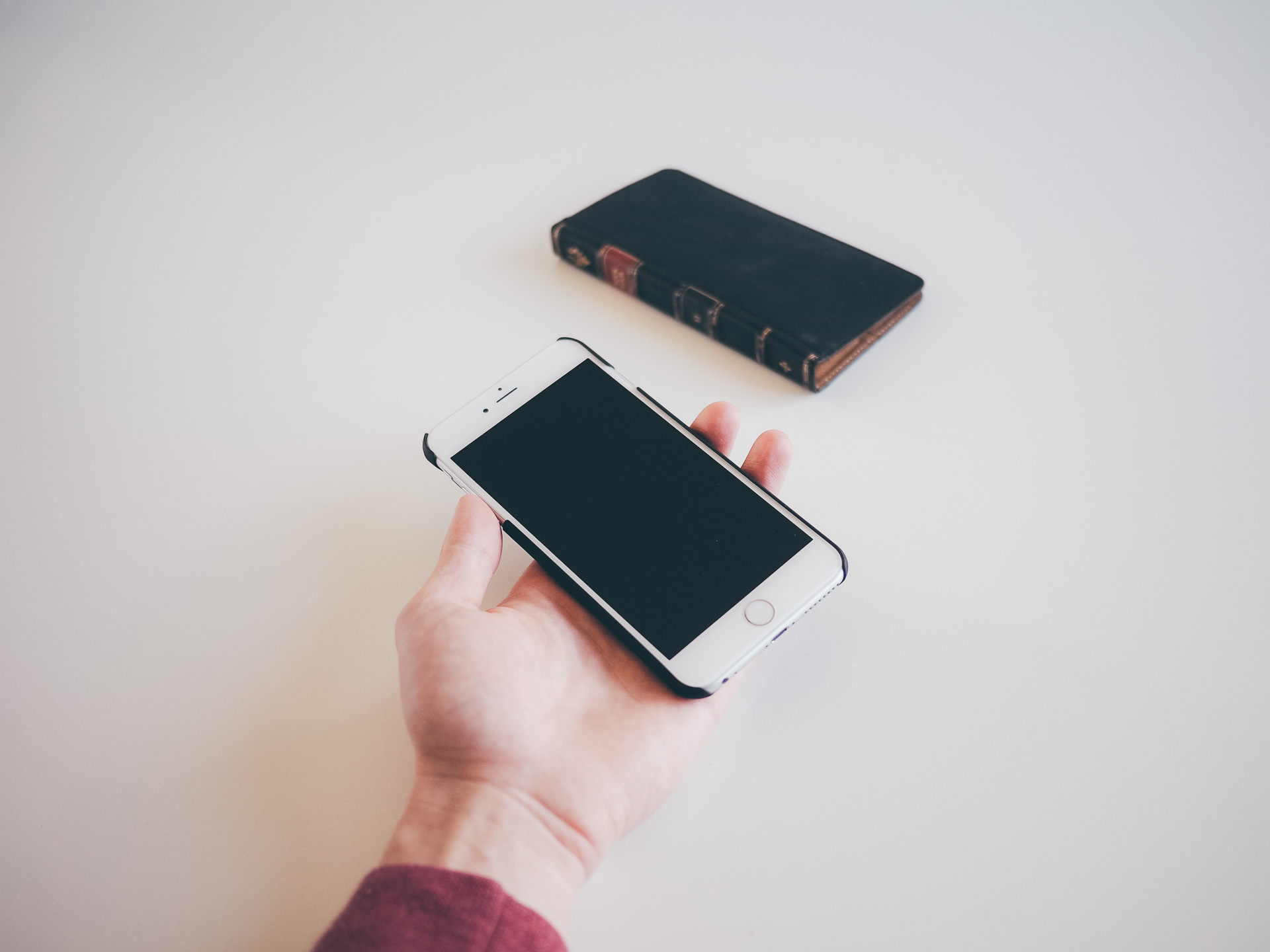 The inside case can slide out and allows the iPhone to roam free. 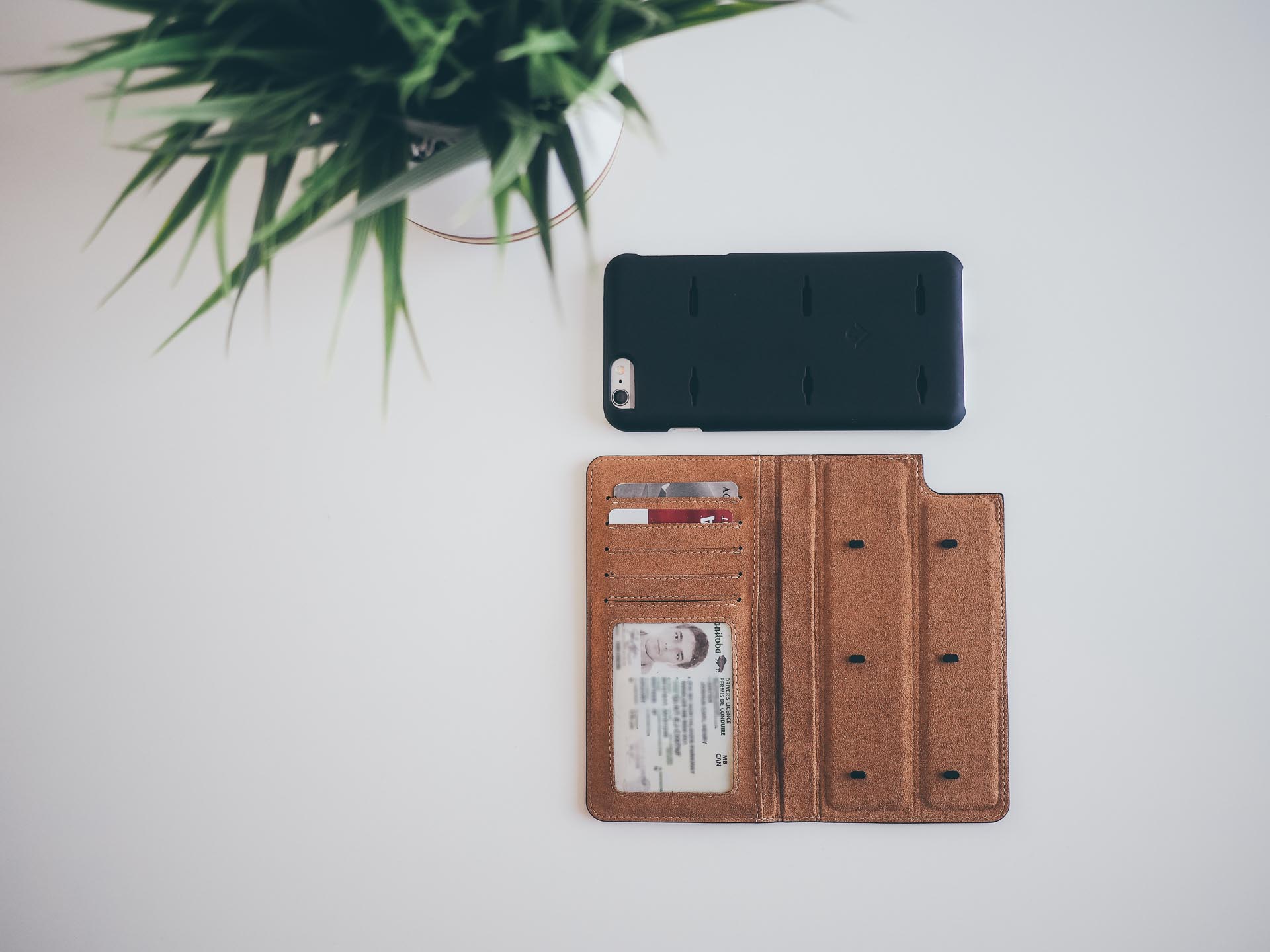 The grooves in the back of the case line up with the cogs in the BookBook shell.

The biggest feature of the BookBook for iPhone 6 and 6 Plus is the shell mechanism. The BookBook comes with a durable rubber case with little cogs cut out of the back to securely attach it to the BookBook shell. 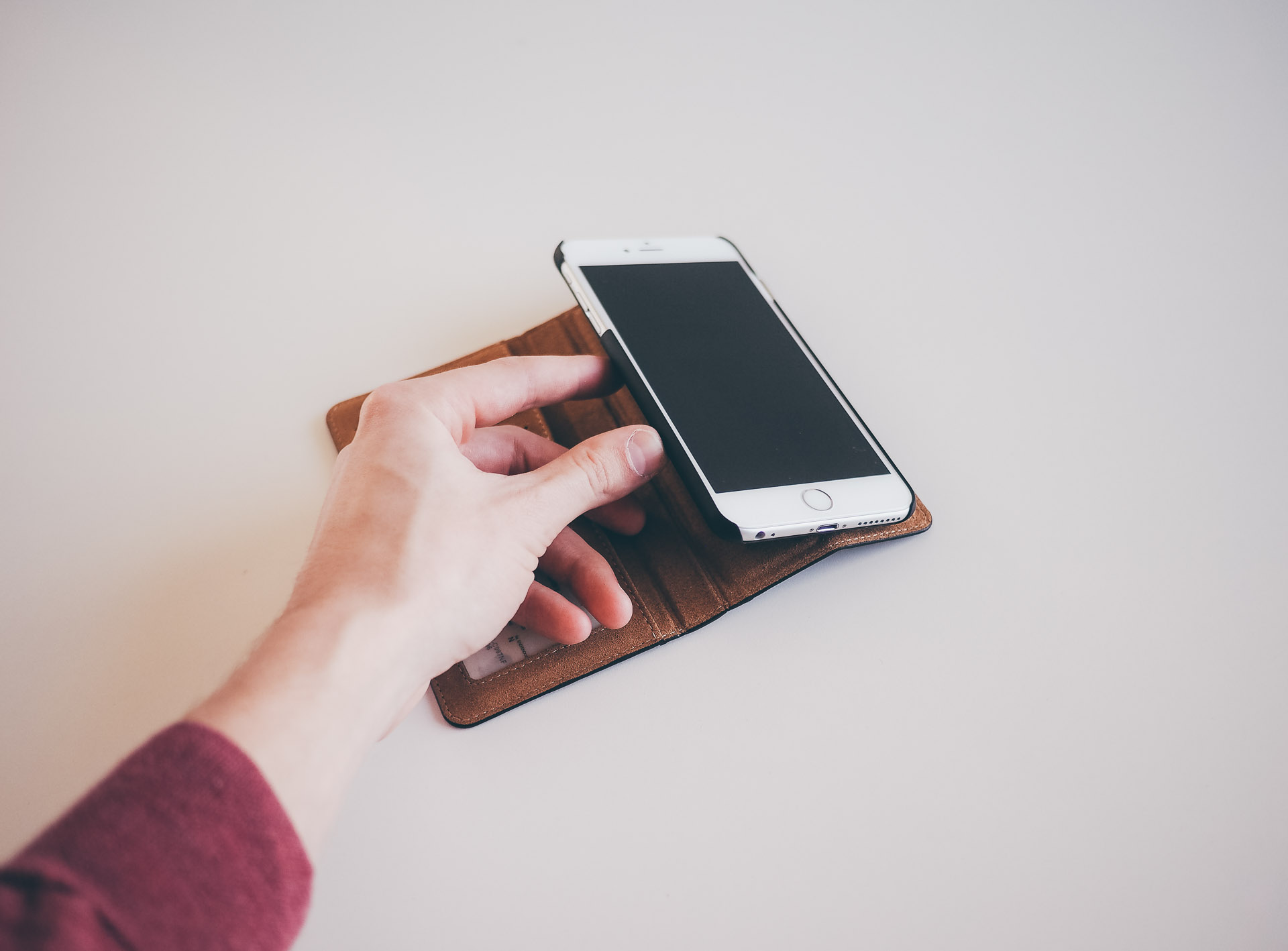 Taking the iPhone out is as easy as sliding it out of the grooves.

The iPhone slides into the secure case and can be left on the iPhone forever afterward. If you want to secure the iPhone to the shell, place it flat on the wallet and slide to the right until you feel it secure in place.

Although a little tricky to implement, I think the option of being able to remove your phone from the case without exposing the entire backside of the iPhone is a great bonus. 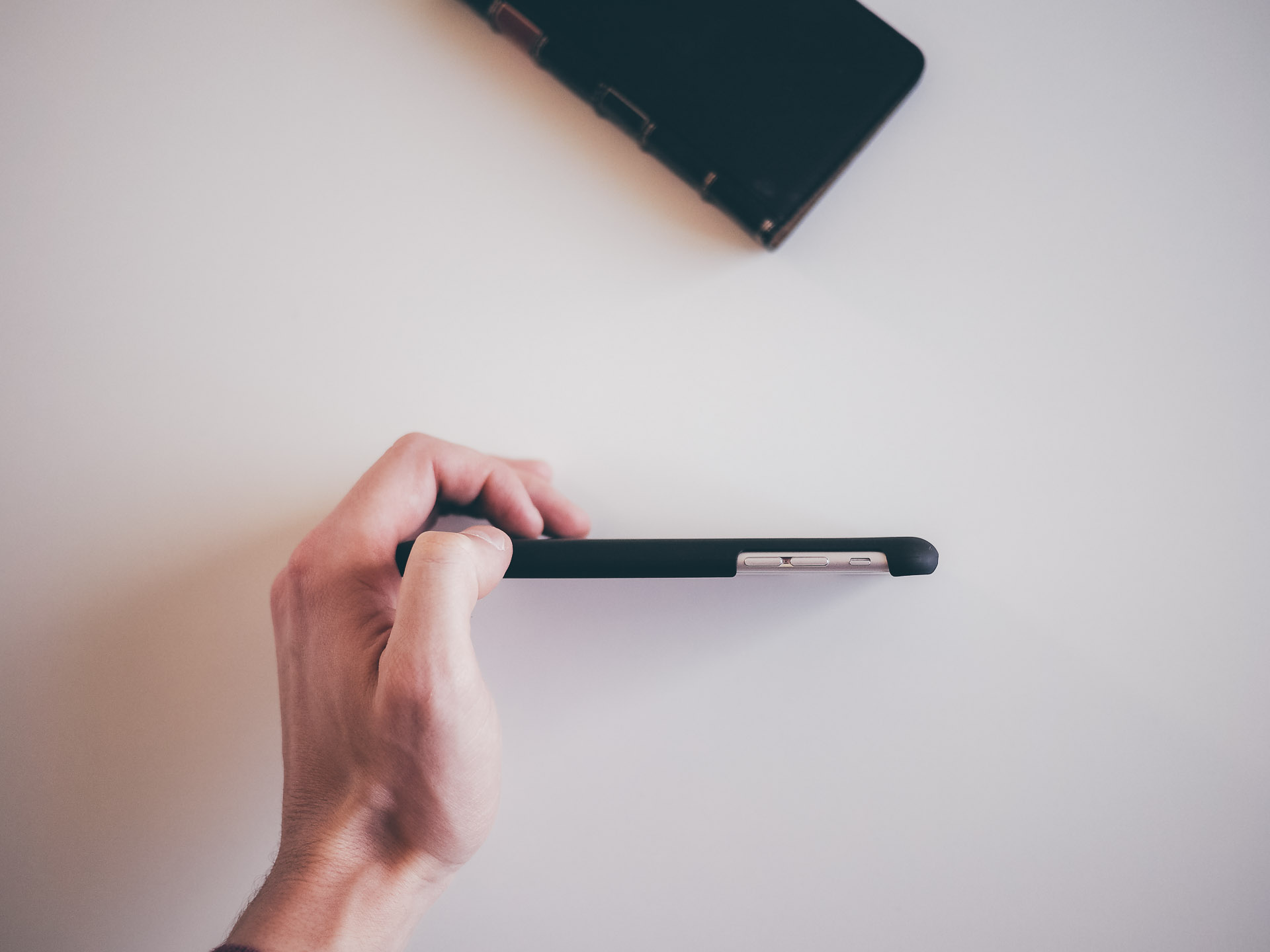 The case doesn’t make the iPhone too much bigger and improves your grip of the slippery 6 Plus.

The rubber case itself is actually a good case on its own. It doesn’t add much thickness to the phone and it helps improve the tactility of holding the phone. Many people have complained about the 6 Plus’ slippery feel and how easy it is to drop at a moment’s notice. By sliding the 6 Plus into Twelve South’s rubber case, the phone becomes easier to hold onto. 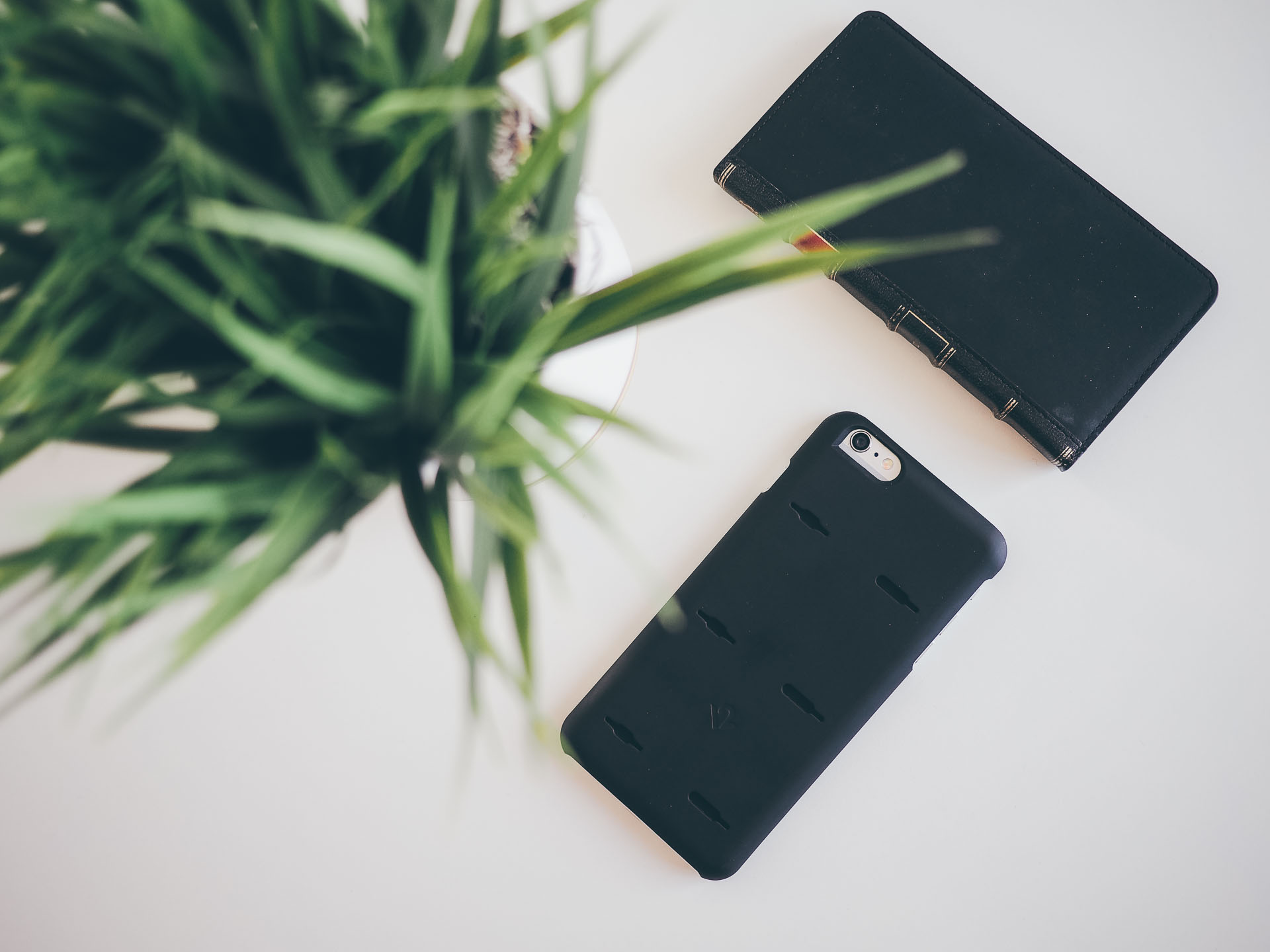 The rubber case has a cut out for the camera so you don’t miss any shots.

Twelve South didn’t leave anything out with this rubber case — a sizeable camera cut out has been added to the case so as to avoid missing those precious shots. As an added bonus, the outer rubber is a nice matte black, so it should avoid any flares of light you may have experienced with the shiny silver aluminum on the back of the iPhone 6 Plus.

Overall, I think this “case-within-a-case” design is quite ingenious and really helps the BookBook become an everyday case, as opposed to a minimal case when you don’t want to carry many extra things. 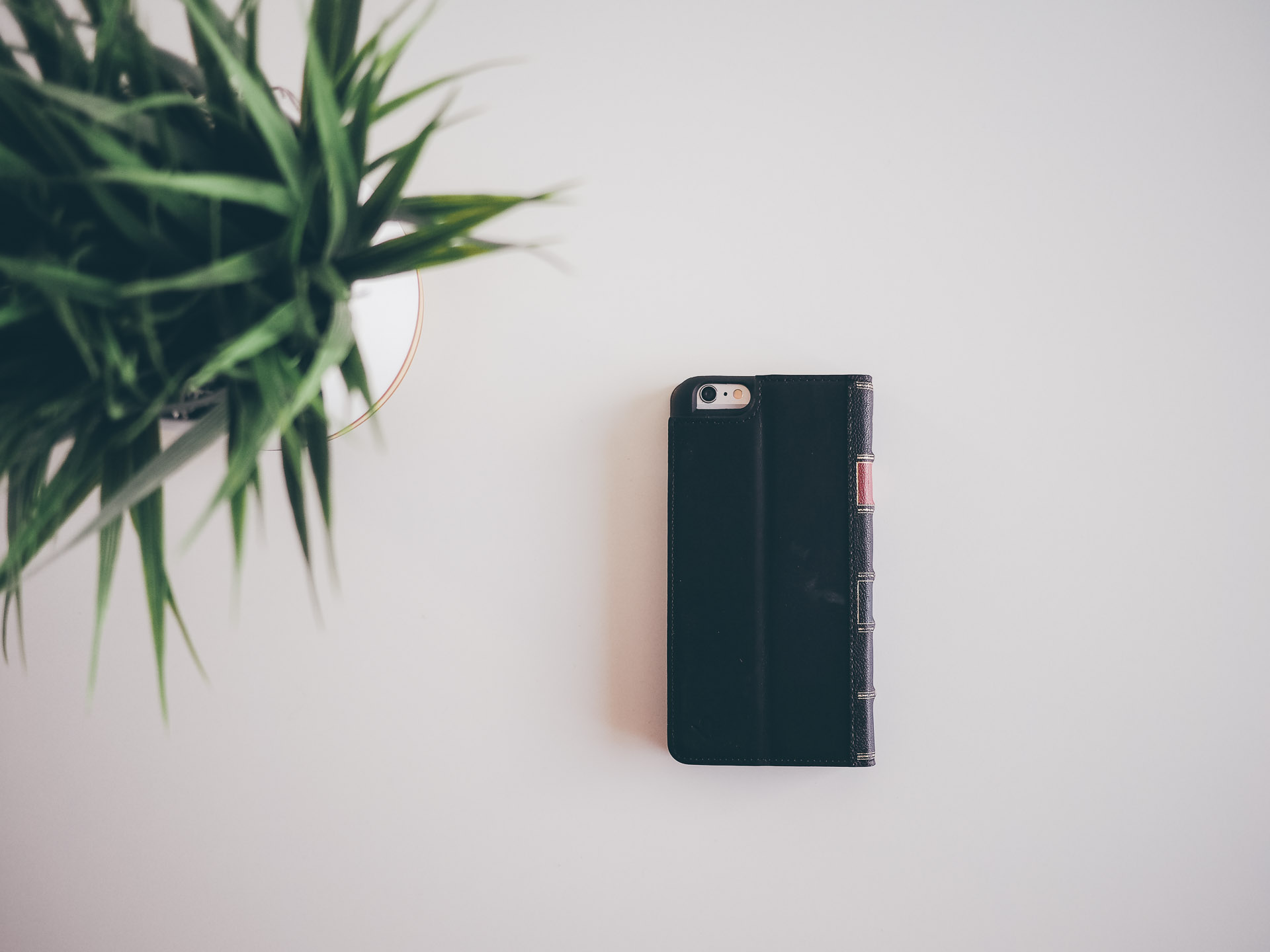 The groove on the backside of the BookBook folds over to prop your iPhone up for viewing. 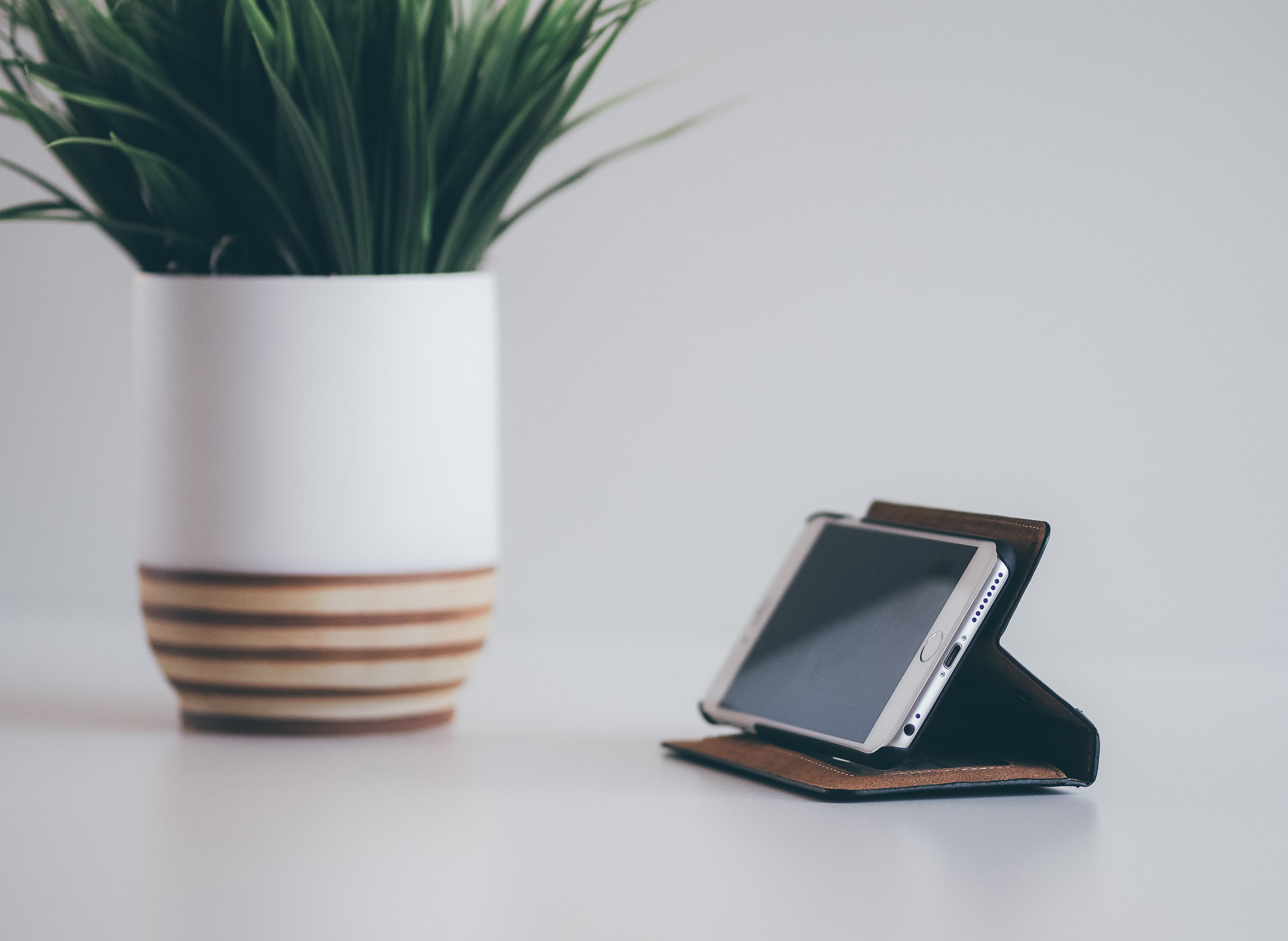 Like the SurfacePad by Twelve South, a propped up iPhone is great for viewing videos.

Lastly, the back side of the BookBook shell has been given a nice foldable feature that allows you to prop your iPhone up for videos or FaceTime calls. This feature was borrowed from Twelve South’s SurfacePad and works decently well when you need it to. It gets bonus points for how great it looks when propped up on your desk. 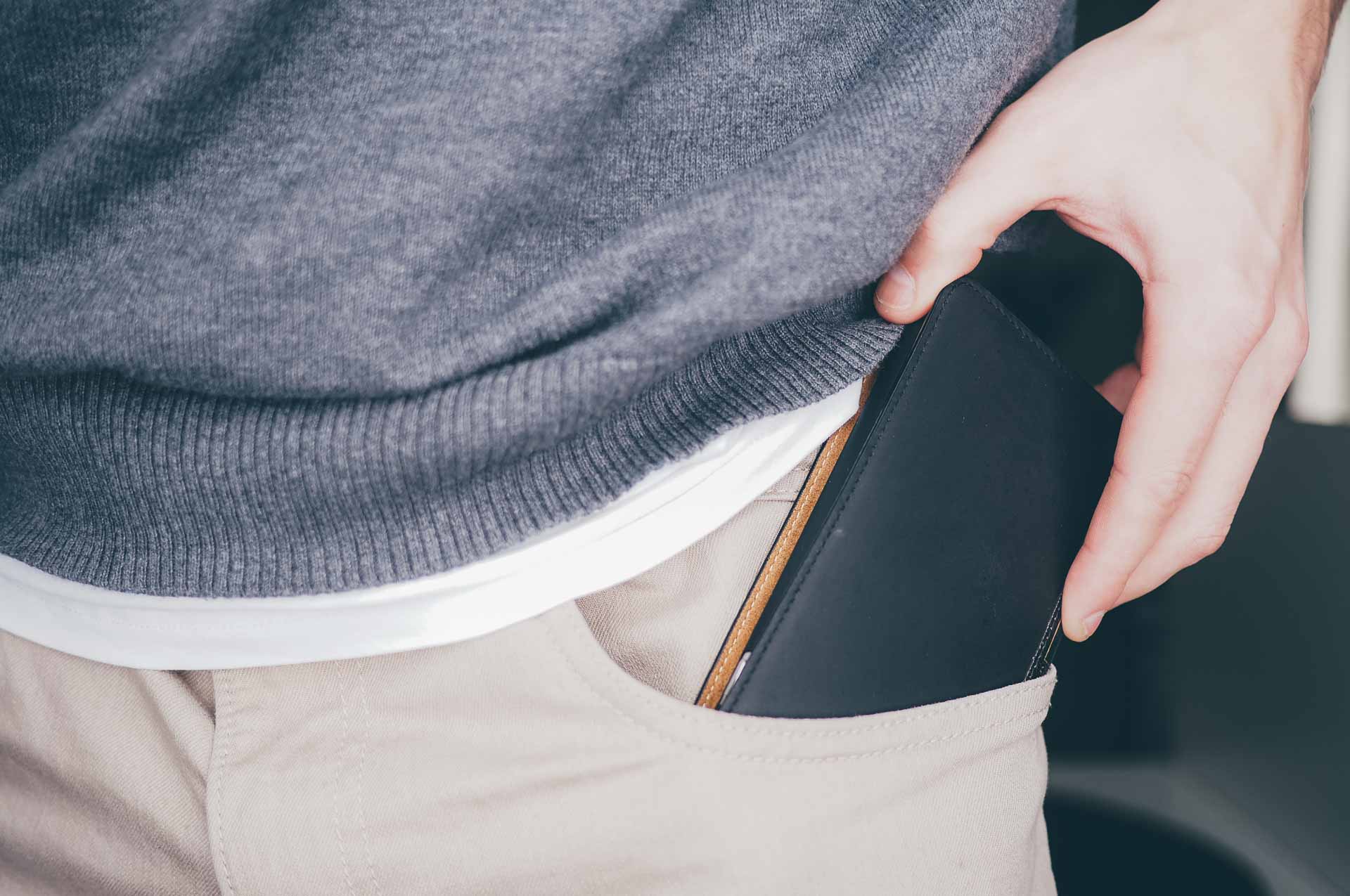 The BookBook for iPhone 6 Plus is fairly large for a front pocket. 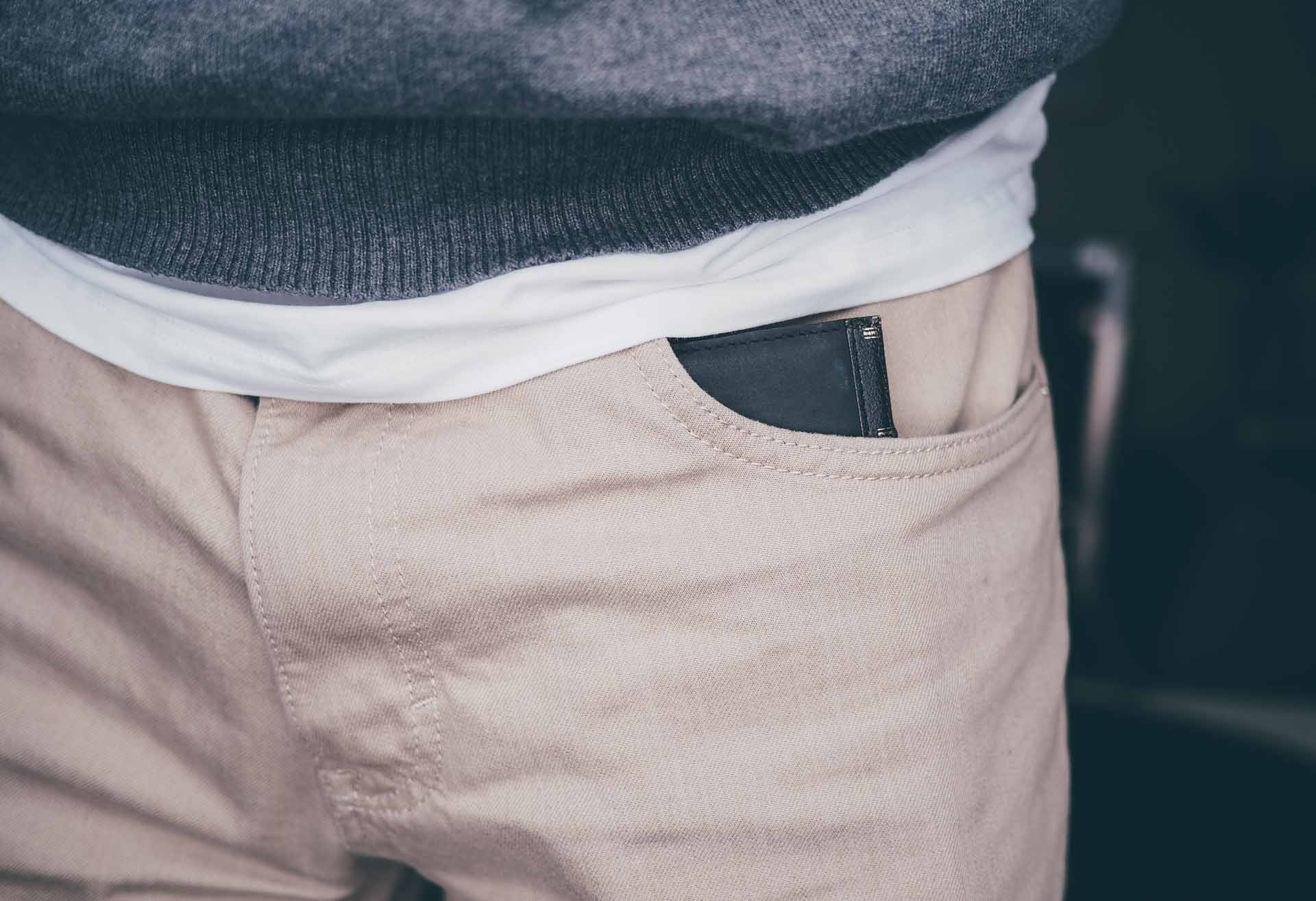 Generally, carrying the BookBook in a jacket pocket is easier than in a front jeans pocket.

During winter, when coats are worn with big pockets, carrying the BookBook isn’t a major hassle. Come summer time when only smaller pockets are available, I’ll have to get used to carrying my phone in a bag or sliding it in and out of my back pocket whenever I sit down. 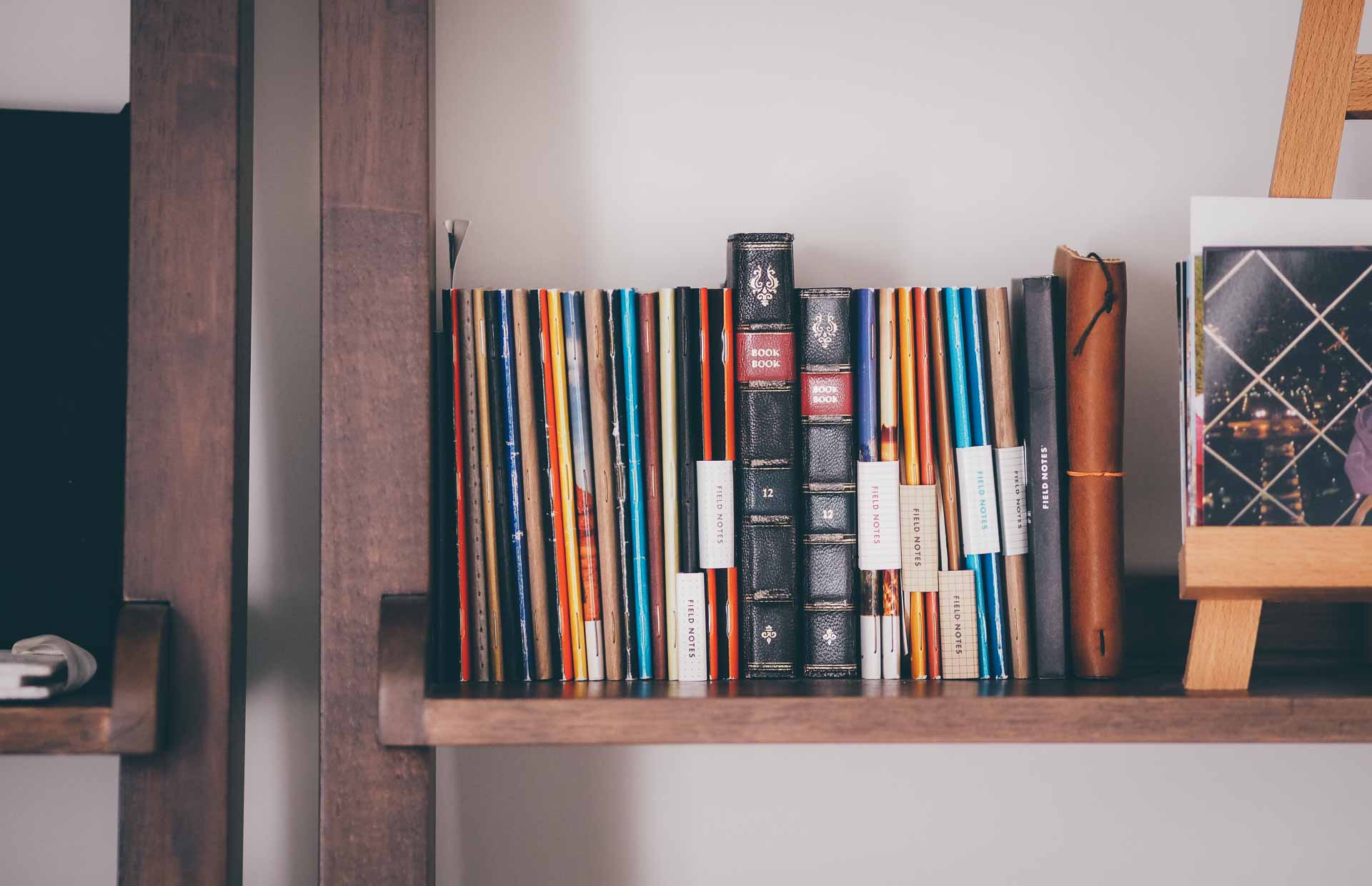 The BookBook cases amidst a collection of Field Notes memo books.

Perhaps the best aspect of the BookBook for iPhone 6 and 6 Plus is that it only adds bulk to an already large product. I generally carry my 6 Plus in a back pocket or in a jacket pocket because I don’t feel comfortable carrying it in my front jeans pocket. As a result, adding the BookBook case to the 6 Plus doesn’t change how or where I carry my phone.

Instead, I can eliminate carrying my billfold wallet and only carry one thing with me wherever I go. The BookBook for iPhone 6 Plus is large enough to easily carry Canadian cash, so the worry of needing to carry our unique polymer bills in their own separate pocket has been eliminated as well.

The rest of the case has become the same old story for Twelve South. The leather is top notch and only looks better with age. The extra card slots will be welcome for many people and the inner material makes it easier to slide cards in and out of the BookBook.

And, without a doubt, the cool shell mechanism that keeps your iPhone protected both inside and outside of the BookBook shell is brilliant. I can slide my phone out of my wallet and lay it on my bedside at night. I can leave my wallet in my jacket pocket while at the office and can just carry my phone with me. In general, this has made the BookBook far easier to use than its predecessors. 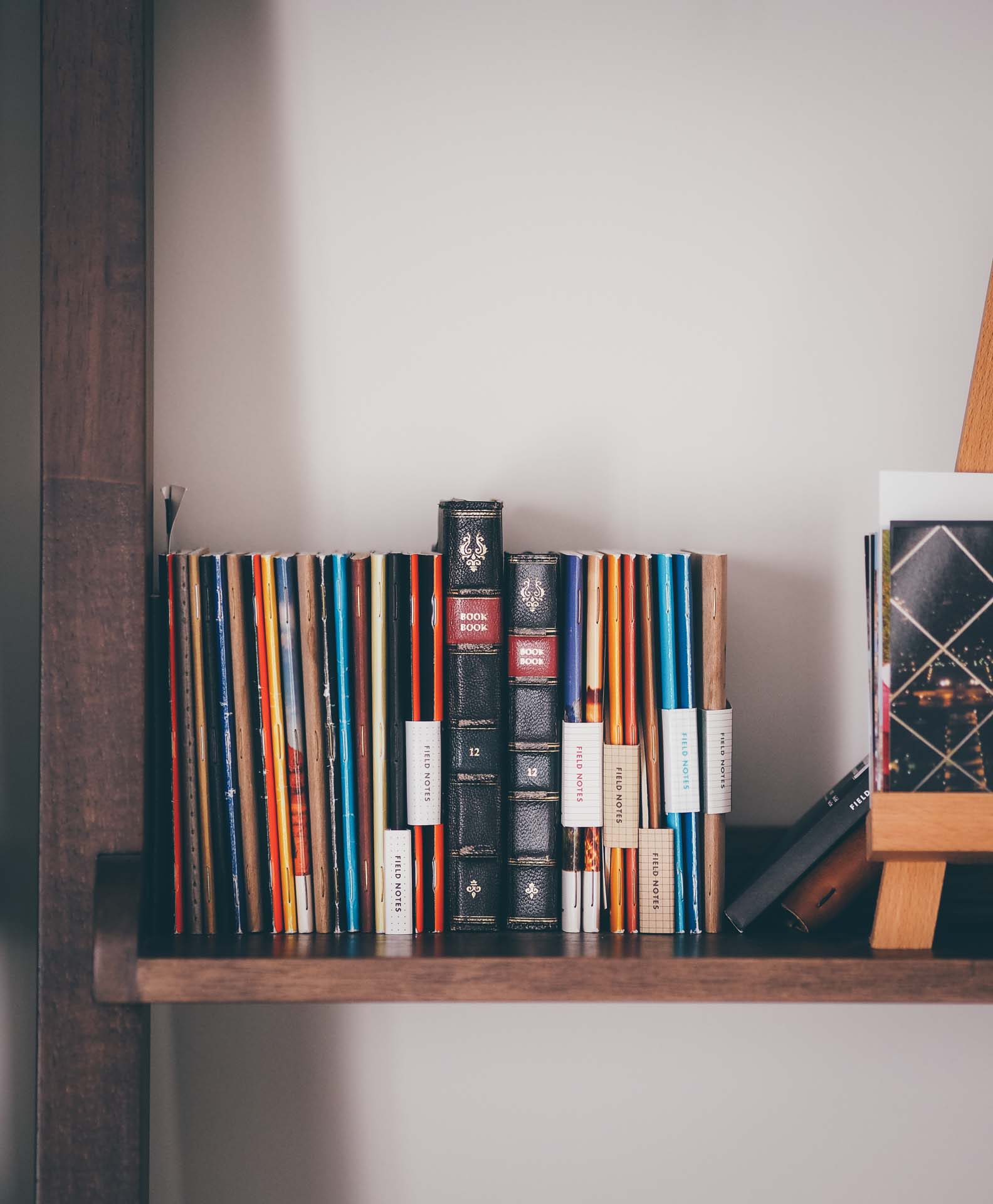 I’m always game for eliminating extra things in my pockets and the BookBook has swiftly removed my wallet from the mix. I can now carry everything I need in one pocketbook instead of carrying my phone and a billfold wallet. Best of all, it hasn’t changed how I use the iPhone 6 Plus one iota.

If the bulk of the case turns you off, then disregard the BookBook. But, if you want to carry less on a daily basis, the BookBook will give a nostalgic look to your optimized everyday carry. 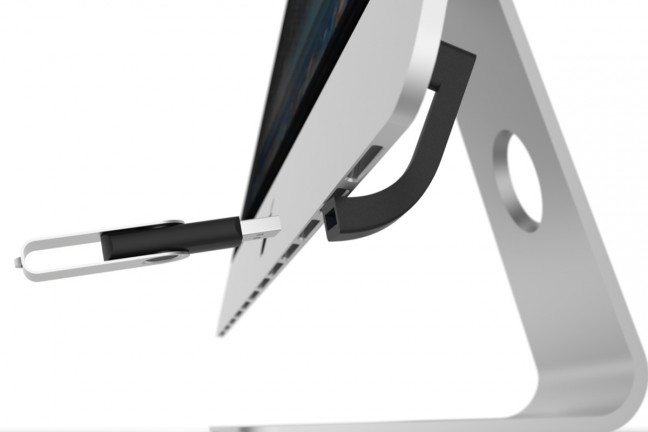 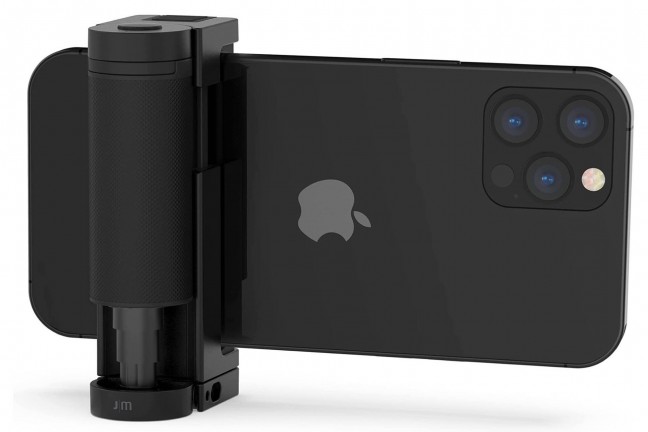 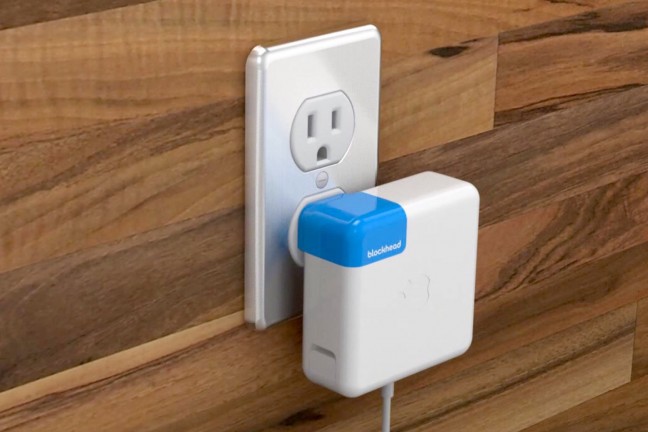