These are the Sony MDR10-RBT from Sony. It’s a terrible name that belies an otherwise solid set of Bluetooth headphones. The MDR10-RBT have killer 17-hour battery life, incredible long-term comfort, and an optional auxiliary port for cabled listening. They’re also an incredibly practical companion for the cold winter months. 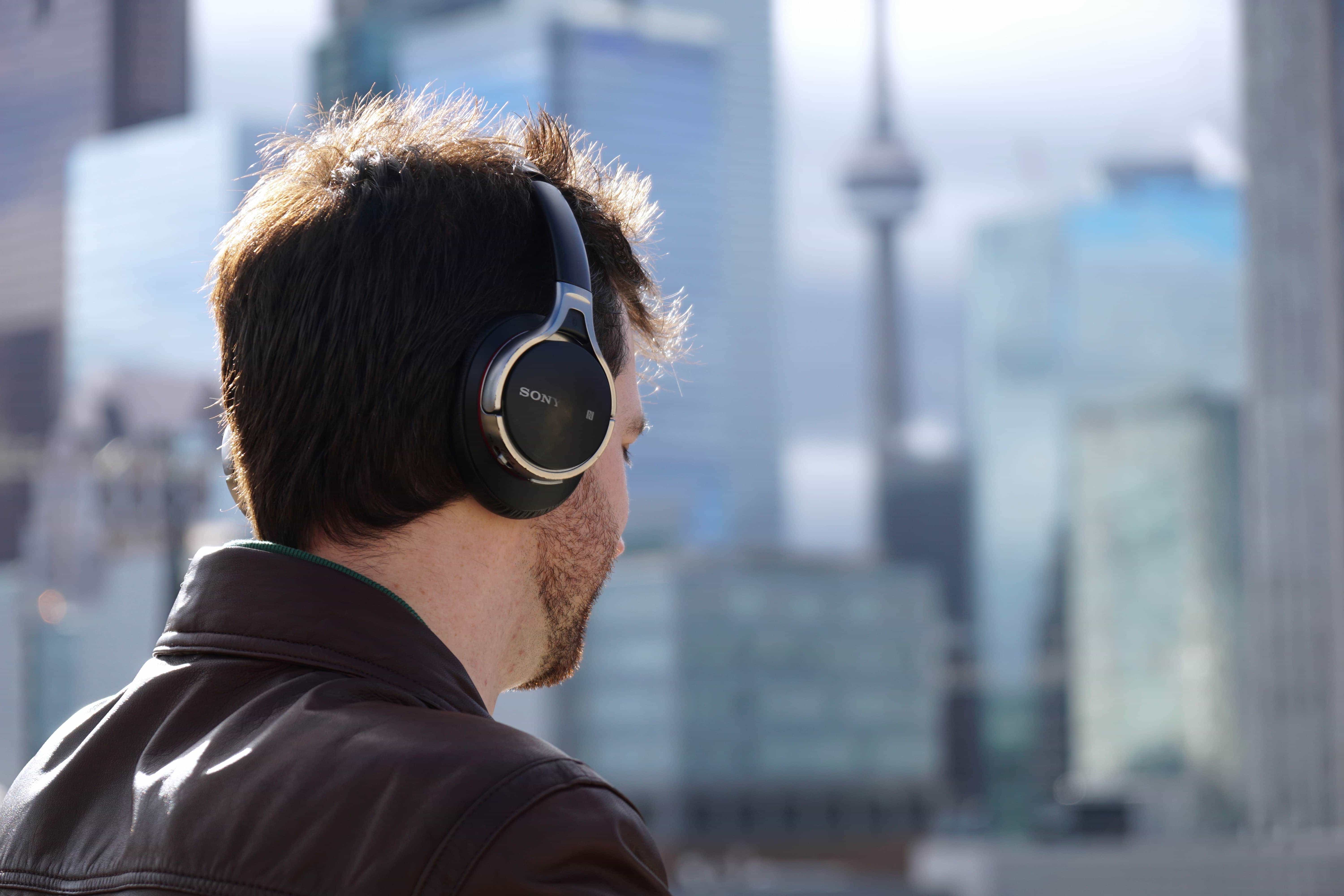 The over-ear design of the MDR10-RBT bluetooth headphones lends itself to being a great winter-wear alternative.

I actually stumbled upon the MDR10-RBT while looking at its more expensive sibling, the $400 MDR1-RBT. I love the premium styling on the MDR1 and Amazon reviews have been quite positive, but I was struck by their size when I tried them on at my local Sony store. The MDR1-RBT are large, meaning they’re harder to fit into bags and wear casually around my neck (especially with a scarf on). 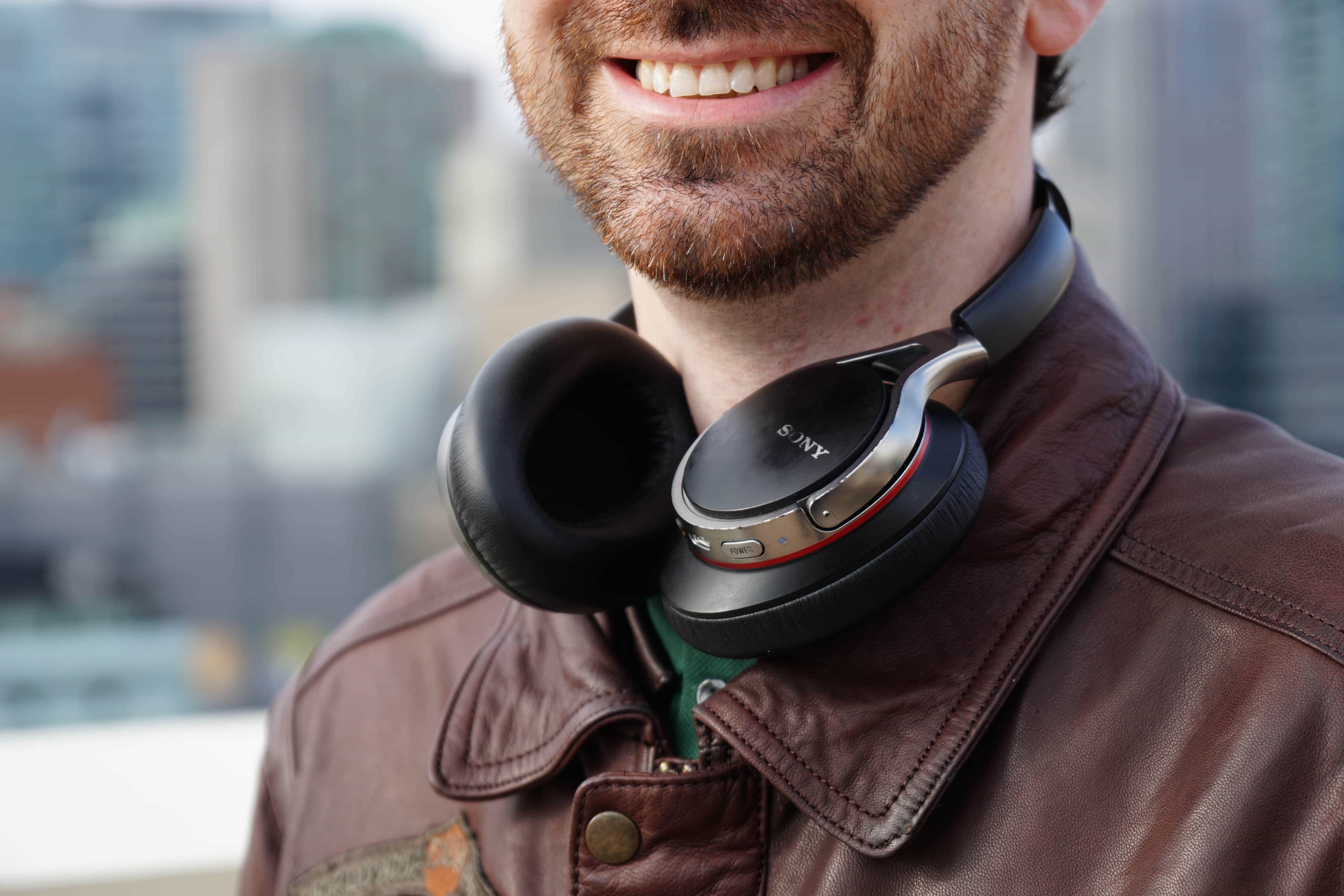 These headphones are big, but you can still wear them around your neck when you’re not using them.

Then I tried on the MDR10-RBT which, at $200, was just within my price range. The iconic strip of red is still present, but the ear cups are smaller. With the two models side by side, it was easy to tell where Sony cut costs: the black plastic on the MDR10RBT feels cheaper, and the silver paint around the drivers looks a bit tacky close-up. Thankfully, the rest of the headphones are made of better materials, and the build quality has definitely stood the test of time.

The auxiliary 3.5mm and micro-USB ports reside on the left earpiece, alongside the power button and power indicator LED. The right earpiece houses the volume rocker and a hybrid playback controller. You can slide this controller forward and back to change songs, or press it down to play/pause music and answer calls. You can theoretically field a phone call from these headphones, but I really wouldn’t recommend it. The microphone on the MDR10-RBT is awful, but that’s also the case with most mobile headphones regardless of whether they’re wired or wireless.

I’ve had the MDR10-RBT for over a year now, and I’ve never felt the need to put them into their protective case. I wear them on my neck in the snow and the rain or stuff them into my bag with my iPad and gear, and there’s only minor cosmetic damage. So far, the SONY logo is blemished, and the cushioning along the top of the headband has a single tiny rip (which I only noticed because I was looking for signs of damage). I’ve had other sets of supposedly military-grade hardware from V-Moda that hasn’t held up as well as the MDR-10RBT. Given the hundreds of hours of use over the past year, I’m really impressed by the durability of this design. The headband is still tight, the foam around the drivers is completely intact, and all of the buttons work properly.

What hasn’t blown me away is the sound quality, which simply meets my expectations. Before the MDR-10RBT, I was using the Sennheiser PX-200 IIi (another terrible name, I know), which are open-ear and wired, but which sound way better to my ears. Mids and highs are crisp and detailed, and there’s no muddy quality to the sound.

Mids and highs on the MDR-10RBT are detailed, but still feel muddled when played at my usual 50% volume. There is some sound separation to help me pick out the details of different instruments, but the exaggerated bass tends to dominate the sound profile. However, these headphones aren’t so bass-heavy that they’re tiring to listen to, which is an important distinction. I can pass an entire afternoon or evening wearing the MDR10-RBT without feeling fatigued by the sound. 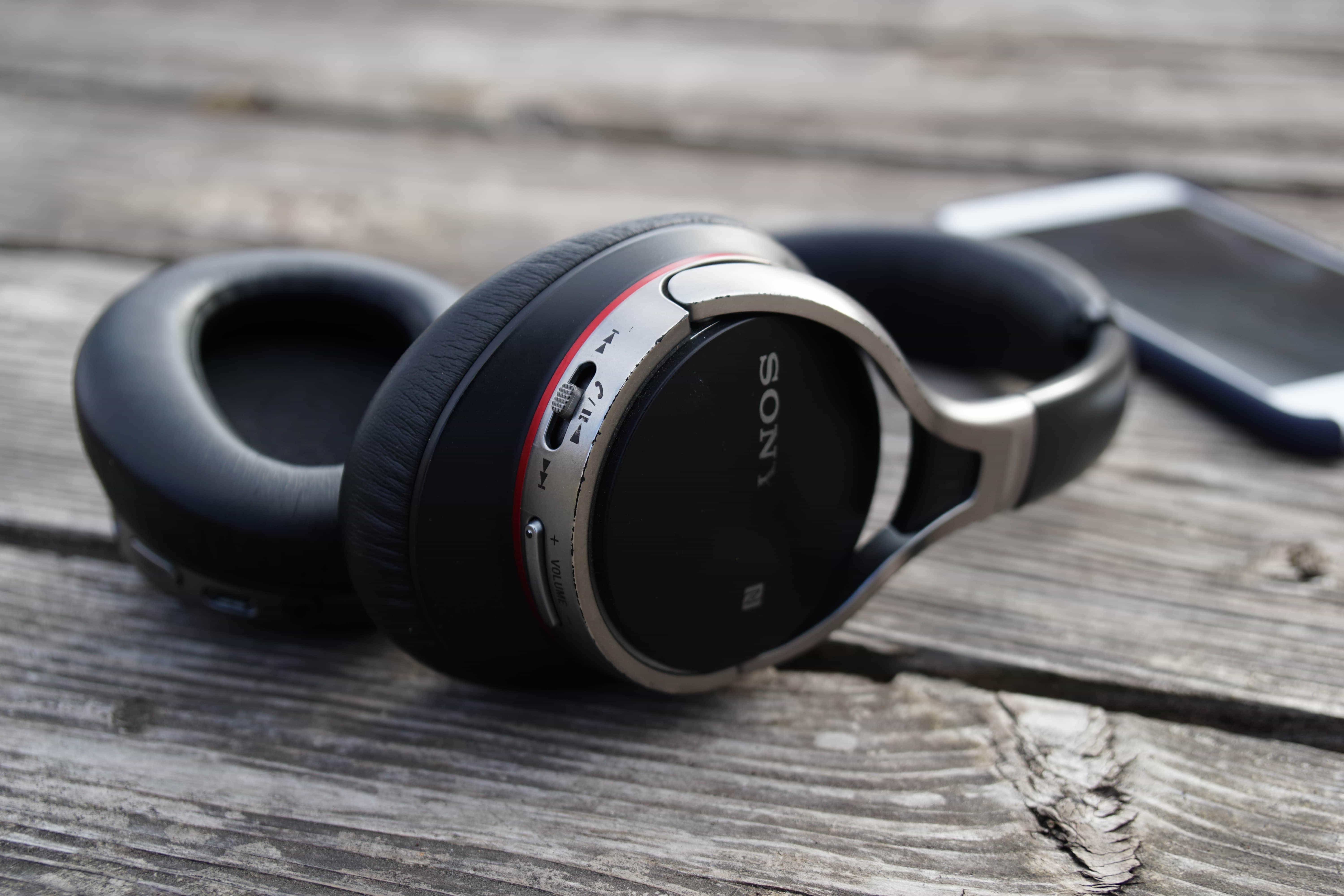 After a year of use, there’s only minor cosmetic damage — and mostly paint at that.

These headphones are great for what I bought them for: outdoor listening. I wanted to enjoy wireless freedom on the subway and long walks, where the sound of the city often tends to smother musical details. The over-ear design does just enough to drown the distraction of other people’s conversations, but not so much that I can’t hear sirens or the bells of cyclists who insist on biking on the sidewalk. So while the MDR10-RBT aren’t quite at the level of my Sennheisers in terms of clarity, they are also usable in far noisier places, which make them a lot easier to enjoy.

I also love how warm these headphones keep me in the winter months, since they completely envelope my ears. All I need in January is a toque and the MDR10-RBT and I’m ready for anything. 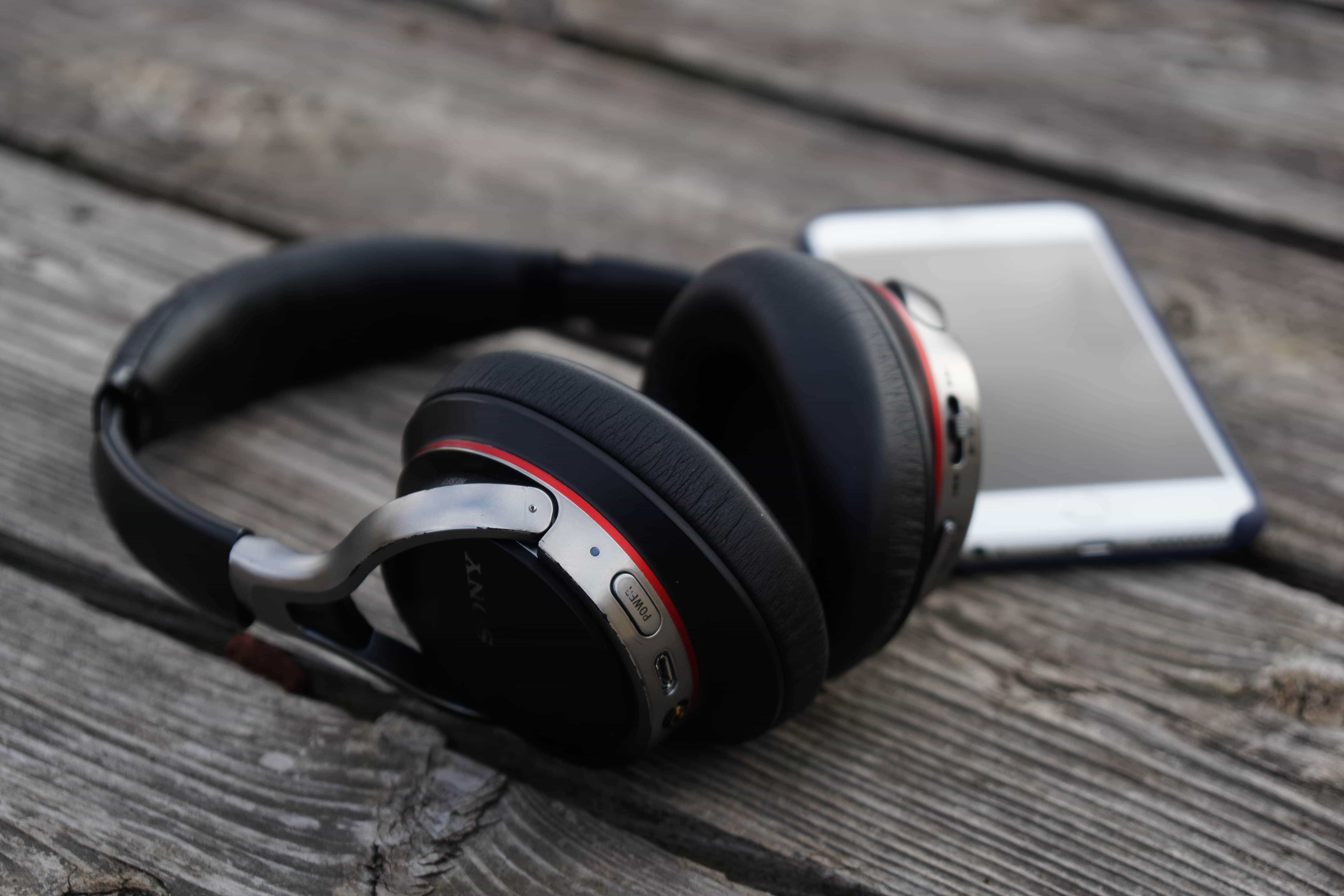 The ear cushions are wonderfully soft and provide a very comfortable fit.

Once you get a good set of wireless headphones, it’s really hard to go back to anything that’s wired. Yes, wired headphones offer higher fidelity than Bluetooth, but the wires also get tangled in turnstiles, wound around bag straps, and inevitably catch on the corner of the desk as you try to stand up. There’s a kinetic cost to having wires dangling from your body, and it’s freeing to be rid of them entirely.

It warrants mentioning that these headphones support NFC pairing with Android devices, but I don’t own any. I can say, however, that the connection has been 95% stutter-free on my Apple devices. I have noticed a few specific corners around Toronto (like King and Bathurst) that really mess with my connection, but otherwise it remains quite stable. Walls remain an issue though. I’m able to listen to music across the room from my iPhone, but having drywall in the way can be enough to degrade the listening experience.

When it’s time to put the headphones away, the earcups fold sideways for easier storage or casual wear around the neck. I also really love that the MDR10-RBT have an auto-sleep function that activates after 15-20 minutes of inactivity. I consider this to be a crucial feature in wireless headphones, and it’s missing from a surprising number of popular models, including the Jaybird Bluebuds X (which I also own). I rarely turn off my wireless headphones because I usually take them off as someone is talking to me, and this is the biggest reasons that my BlueBuds X are often drained after two days. I just forget to turn them off, so they stay idle and the battery drains completely. The MDR10-RBT has no such issues, and so I can often go a full week without having to charge it. 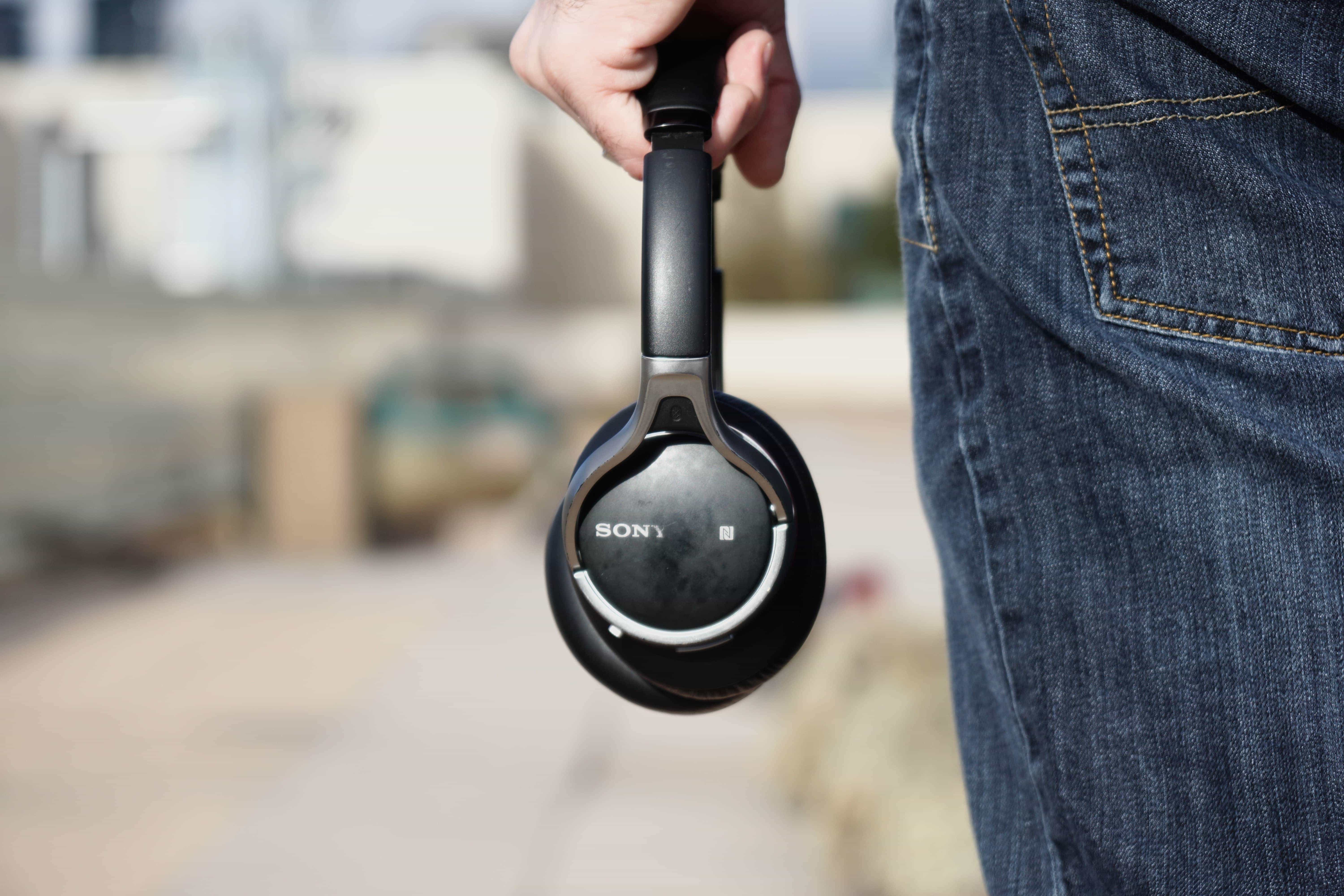 The other limitation of the MDR10-RBT is that its Play/Pause button doesn’t invoke Siri when you hold it down. I’ve read that the higher end MDR1-RBT model does this, but for some reason Sony decided to leave it out of this mid-tier model. Then again, given the terrible mic quality, Siri support may have been a recipe for disappointment anyway.

Wireless headphones are getting more popular, but I think most people tend towards the Beats Solo 2 Wireless when researching the category. However, I’d argue the MDR10-RBT are a better candidate for your dollar. The over-ear design remains audible on the street and on public transit, comfortable enough to wear and listen to for hours on end, and the headphones’ battery lasts a whole work week without needing a recharge. The headphones also handle everyday wear and tear with aplomb. 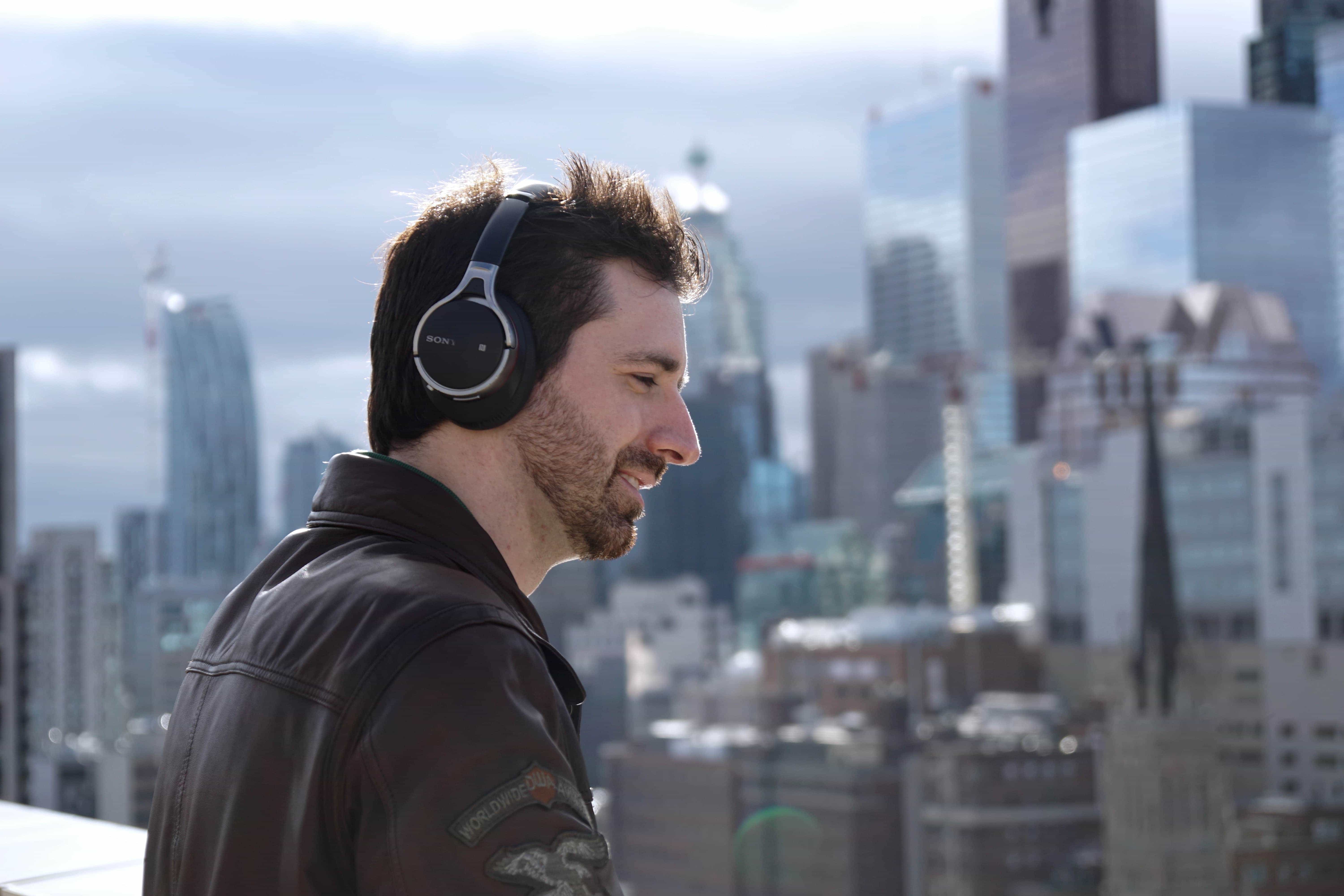 At only $200, the MDR10-RBT Bluetooth headphones from Sony offer a solid value for those looking to enter the world of wireless sound.

I’d call the MDR10-RBT the workhorse of Bluetooth headphones, and at $200, they’re available at a great price for those looking to enter the world of wireless sound. 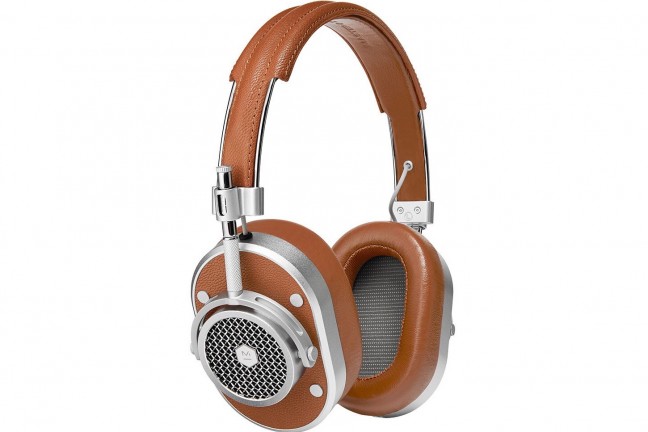 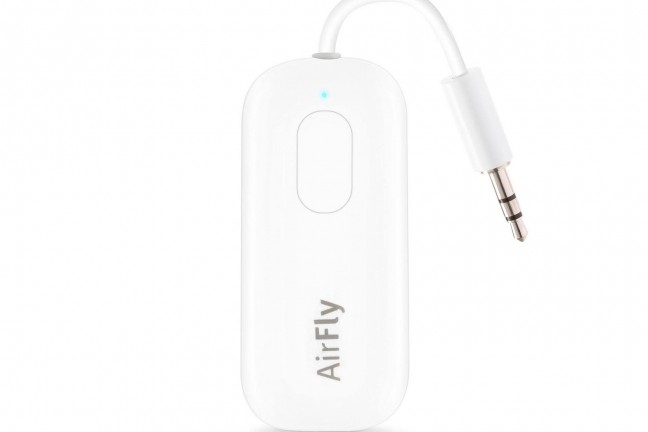 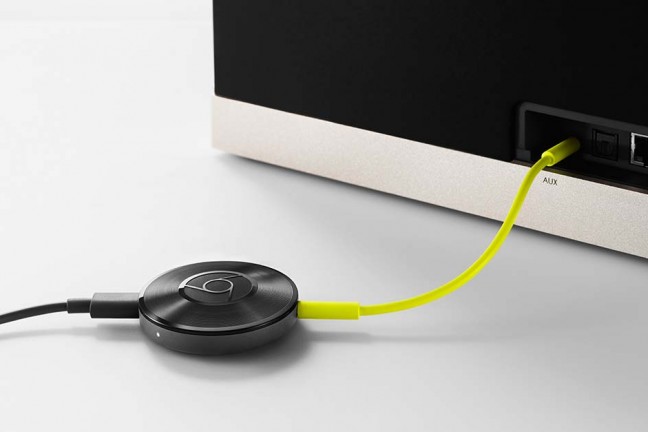