When I put on my Sennheiser HD-1 Wireless On-Ear headphones, it’s surprising to remember the sound is piped over Bluetooth and not a 3.5mm cable. 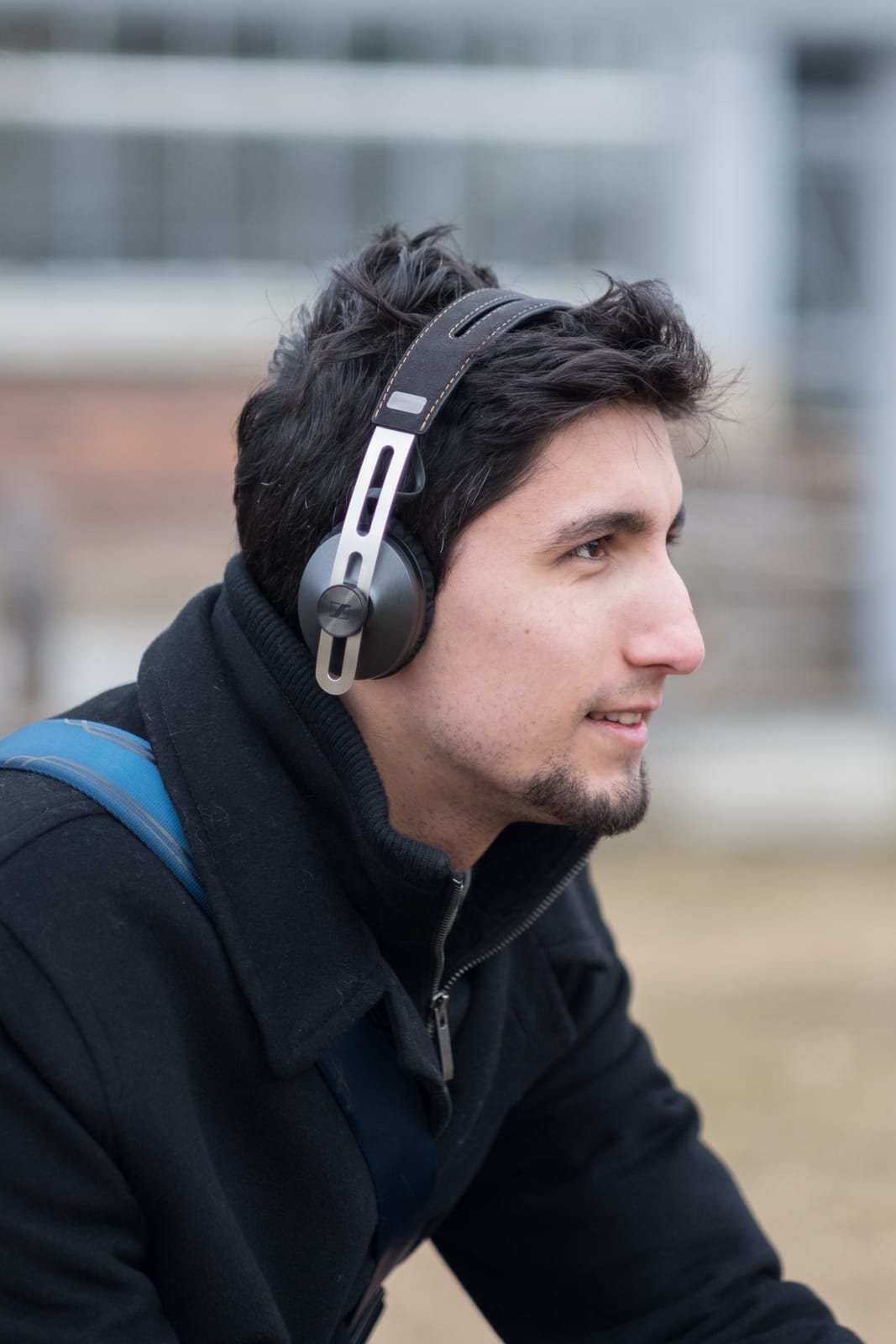 I do like how the stainless steel band stands out in profile.

My previous wireless headphones, the Sony MDR-10R BT, were champions when it came to long term comfort. However, their sound was just ok. That was to be expected from a $200 pair of wireless headphones — I don’t fault the old Sonys. But, when I chose to double my budget to nab the HD-1 On-Ear, my expectations were considerably higher.

I had two criteria for the purchase: the headphones had to feel premium and they had to sound great.

Editor’s note: The HD-1 On-Ear Headphones and the Momentum 2.0 Headphones are the same model with two different names.

The HD-1 On-Ear are a premium purchase at $370, but based on my research and in-store testing at Bay & Bloor Radio in Toronto, they looked to be an upgrade across the board. 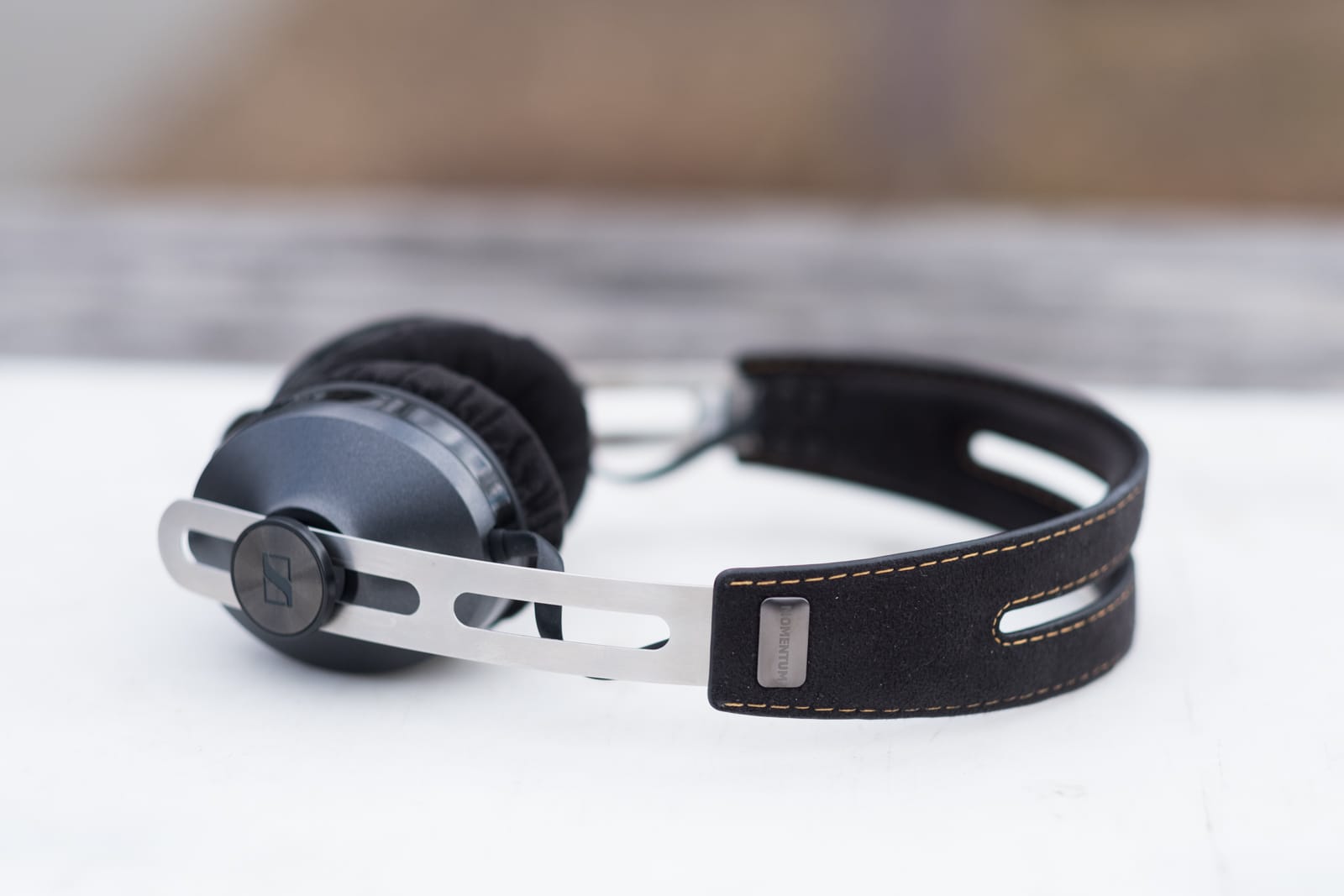 I was wondering how well the Alcantara along the top of the headband would wear, but it still looks like new six months later.

The casing for the drivers are a high quality plastic that don’t creak and aren’t glossy. Controls are all situated on the bottom of the right earcup. There’s a volume rocker that can be pressed inward to control playback, and there’s also a power button and power indicator LED to let you know if the headphones are on or running low on battery. The HD-1 can pair with two devices simultaneously, but I restrict it to one at a time because the headphones will gleefully announce “Disconnected!” into my ears every time I move out of range of a paired device. 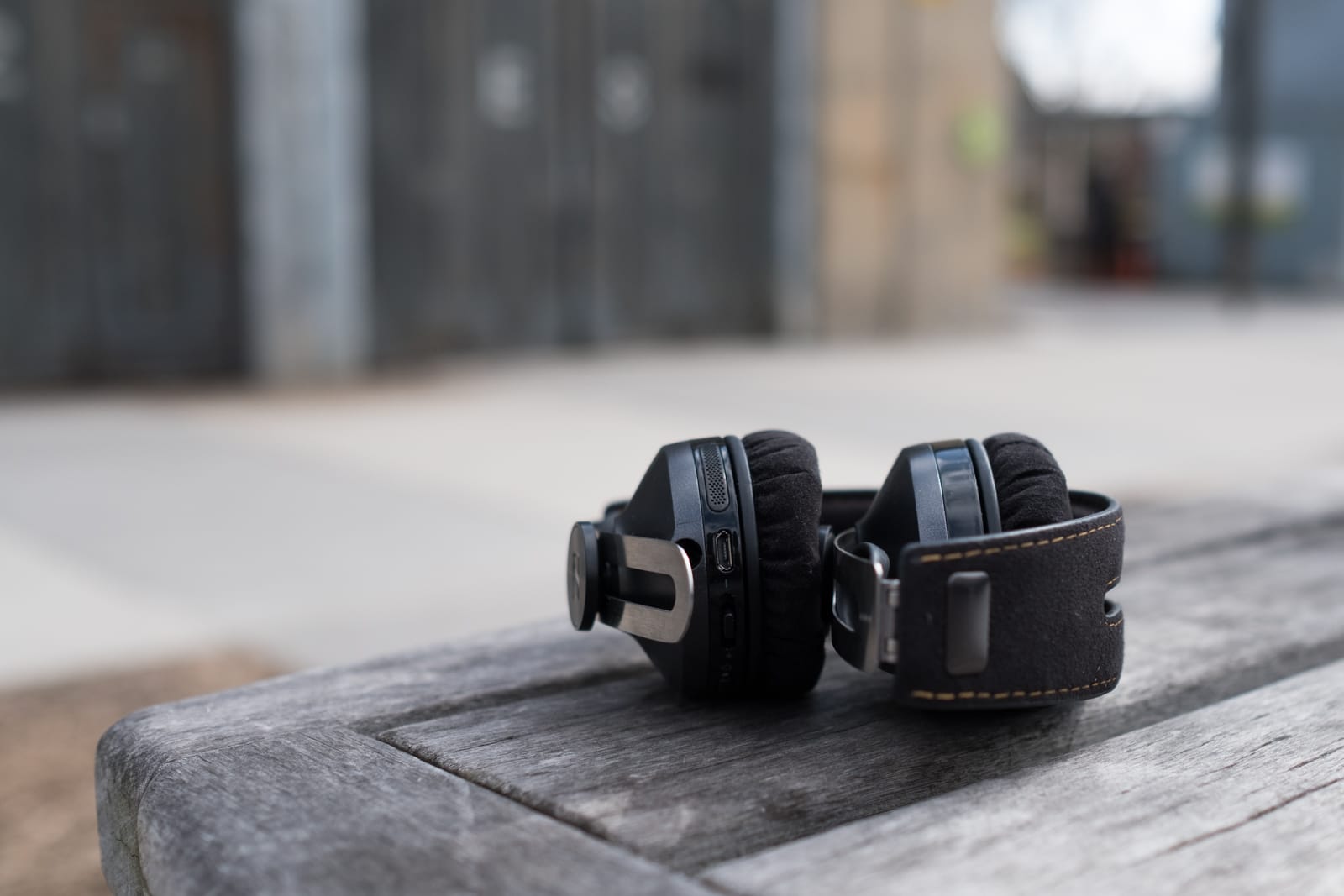 I picked up the on-ear version of the HD-1 for its portability. These things fold up well, and very quickly.

The HD-1 On-Ear fold up compact and are very easy to store in a backpack or messenger bag without the need for a carrying case. These are premium headphones, but I like that they’re hardy enough that I don’t need to baby them. Wearing the HD-1 around my neck for quick storage is fine for short stints, and the earcups are easy to push outwards in case I want a bit more space.

The exposed stainless steel band creates a different silhouette from most other headphones, and although that was what first attracted me to the HD-1, I’m not as hot on the design six months later. 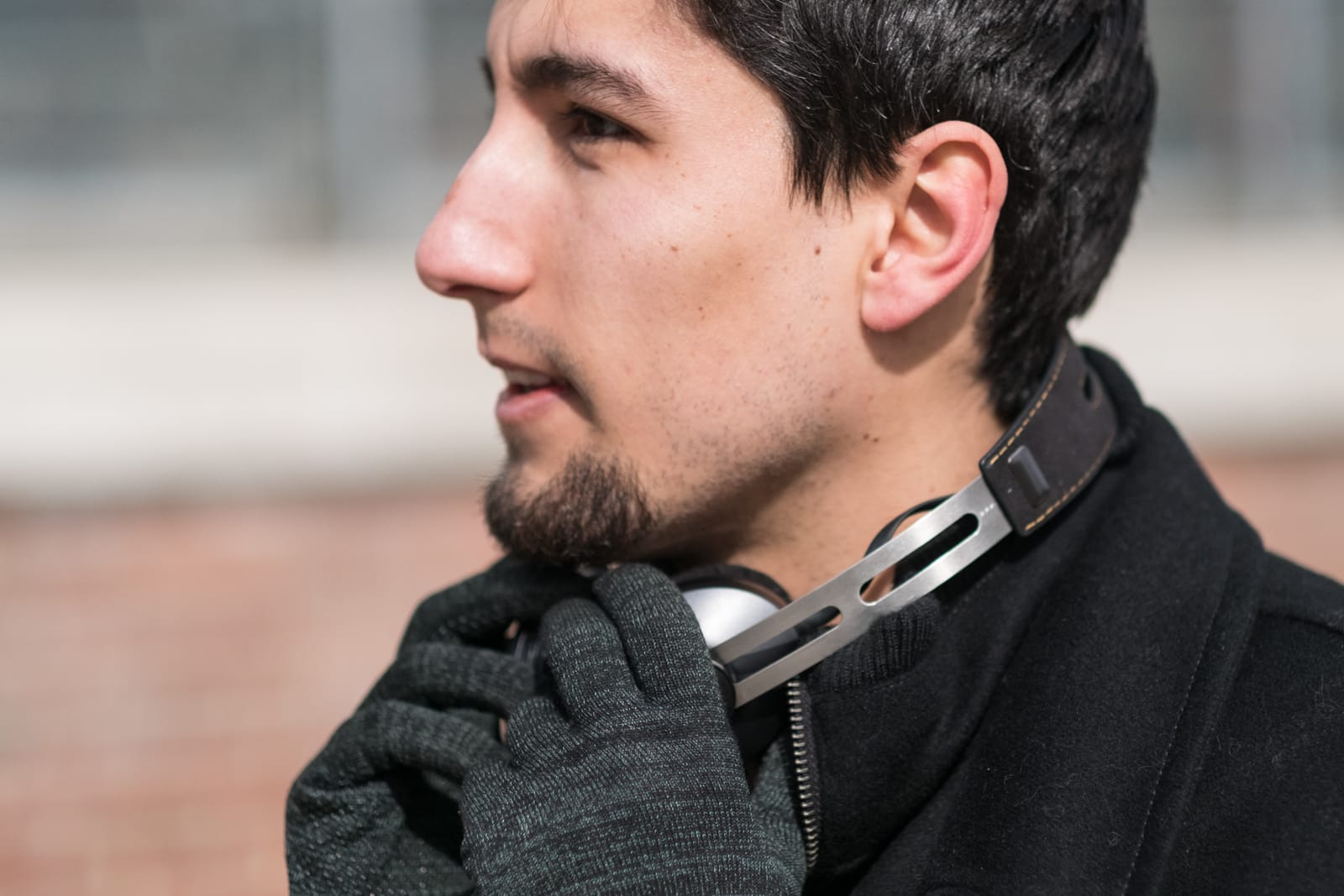 You’ll want to extend the earcups a bit if you’re going to wear the HD-1 around your neck.

There’s no question that the band is durable, but it’s taking a long time to break the headphones in for longer listening sessions. There’s always a period — about one hour into listening — when the tops of my ears start to feel pinched. I can reposition the earcups to grant myself some momentary respite, but it’s never completely comfortable unless I’m wearing the HD-1 over a hat (which provides some padding for my ears). 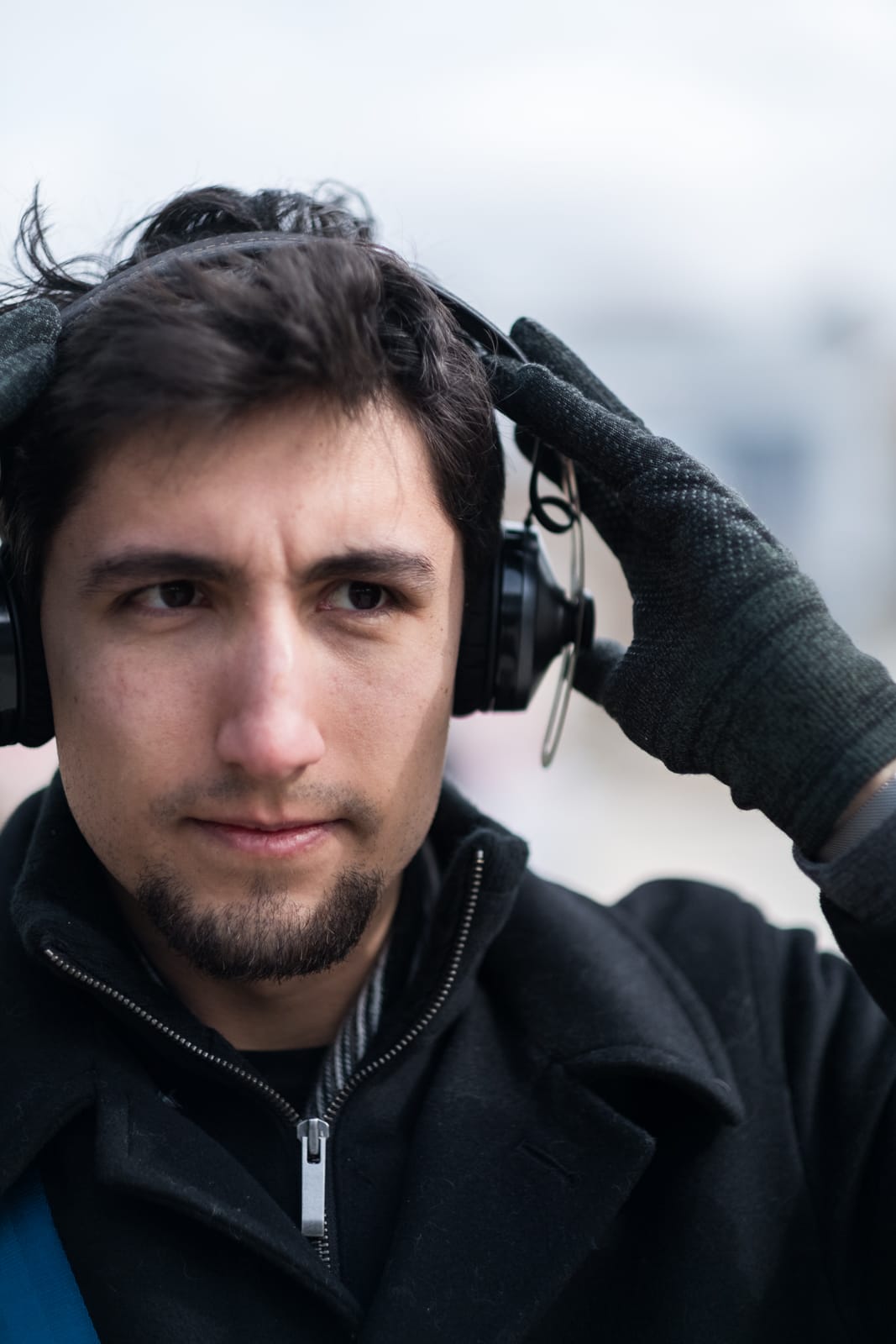 The HD-1 provides good ear coverage in the winter, but that fit is just a little too tight out of the box.

If I could choose to buy the HD-1 over again, I’d probably opt for the over-ear design instead. They cost more and they’re not as portable, but the over-ear version of the HD-1 would be more comfortable for longer listening sessions and have far less direct pressure on my ears.

My Bubble of Music

One huge, redeeming factor for the discomfort is that the HD-1 makes for a wonderful, portable bubble of sound. The active noise cancelling (ANC) stays on all the time in wireless mode, although you do have the option to listen without it in wired mode (a special 2.5mm cable adapter comes with the headphones). 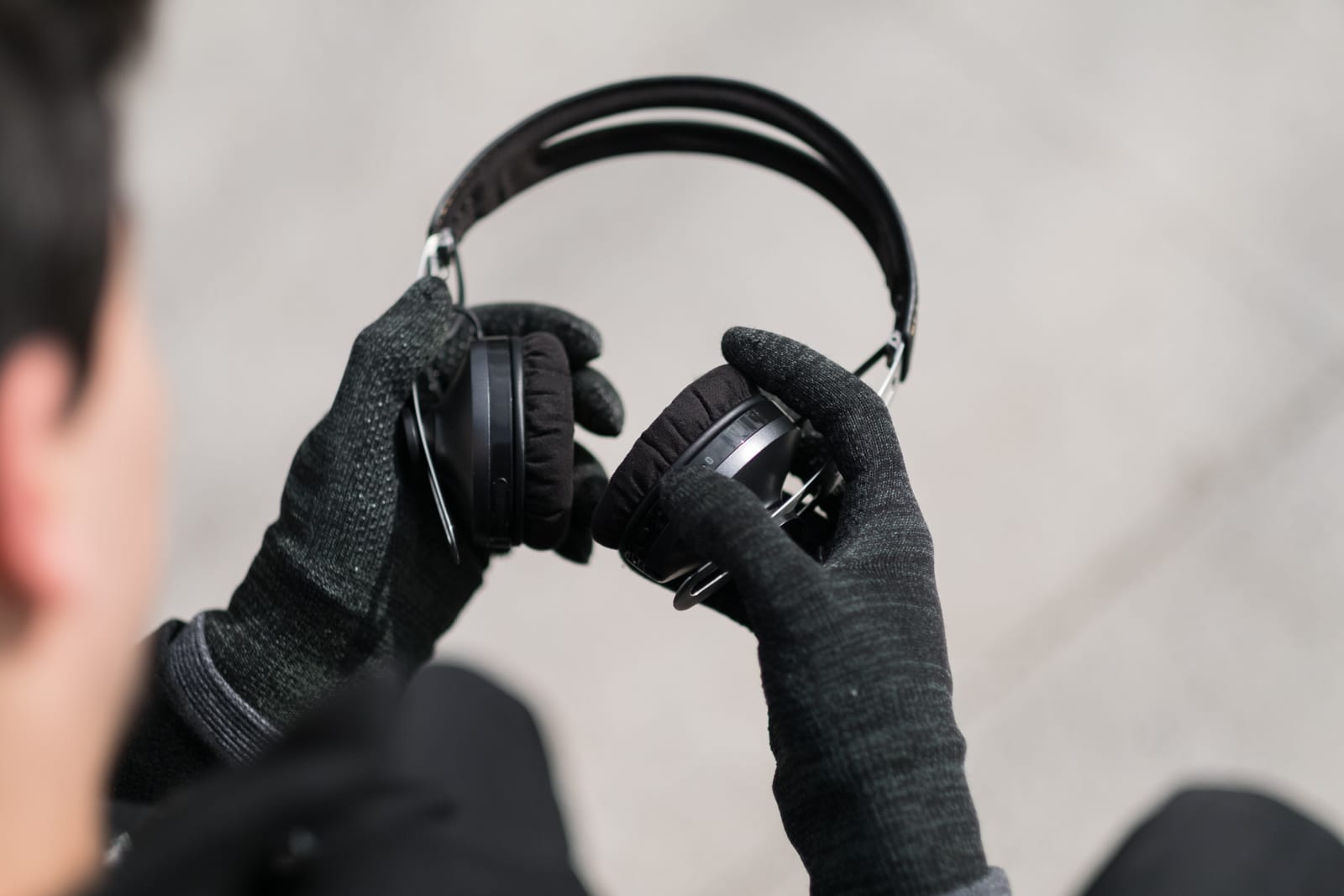 ANC is a feature I didn’t realize I liked until I had it.

However, I’ve never once wanted to turn off the ANC. It’s good enough that it can drown out conversations in the seat next to me with device volume set to 50%. I’ve used the ANC on the subway and on international flights, and it has formed a fantastic bubble of sound to help enjoy music in peace. The only thing that seems to pierce the cone of silence is a crying baby a few rows down on a flight, and even that sounded half as loud as it really was. The ANC on these headphones are good enough to enjoy my music anywhere. 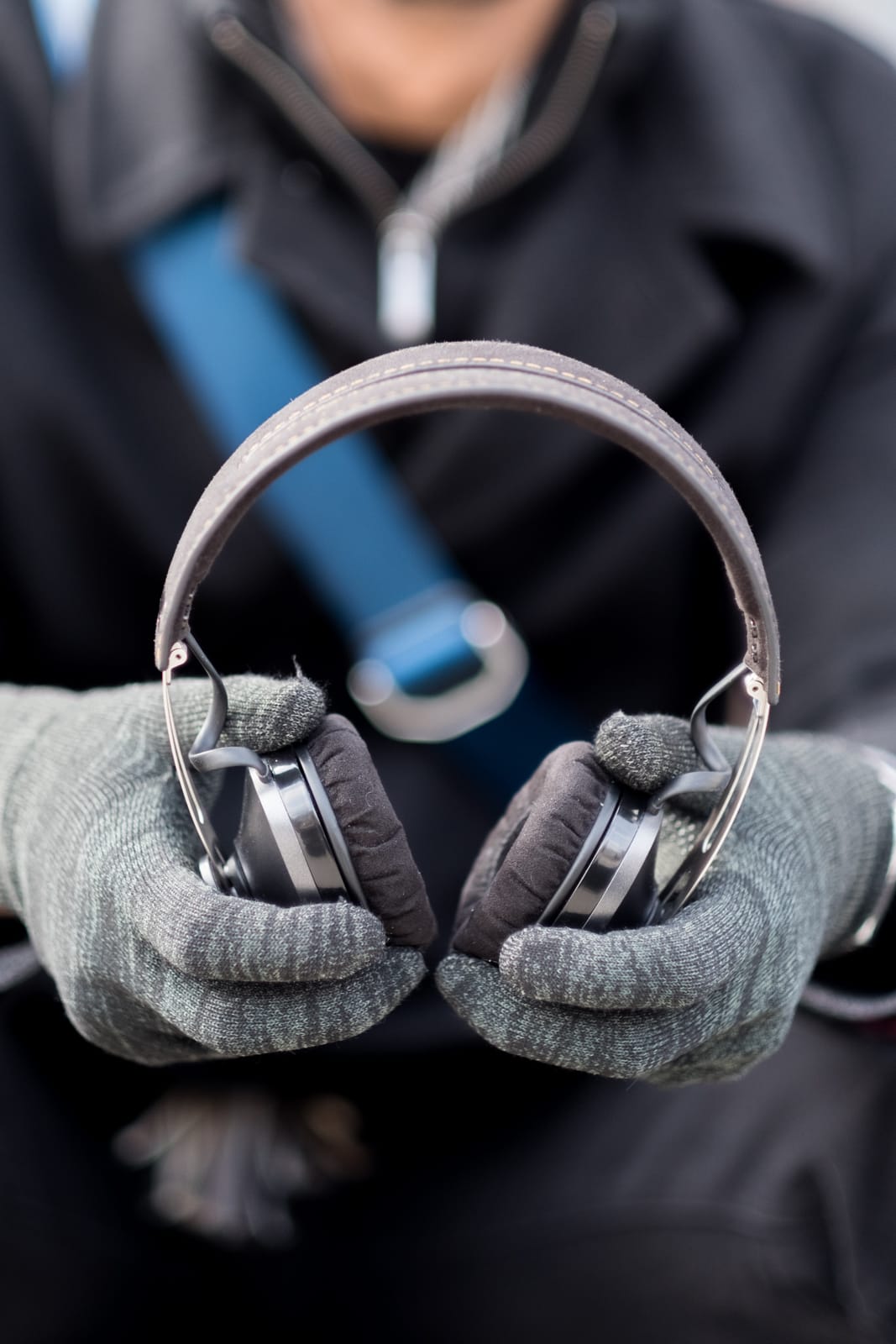 There’s nothing to the ANC: you turn the HD-1 on, and it’s already activated and cancelling a lot of external sound.

As for the sound itself: the HD-1 is fun and poppy, with a tendency towards bass and vocals. I can still hear the twang of the guitar vividly to my right on “Crash Into Me” by Dave Matthews Band, but it’s the reverberation of the bass line in Moss of Aura’s “Compound” where the HD-1 is more at home. I’ve heard more detailed low-end on other headphones and IEMs, but the HD-1 still provides something that I can feel when I want to dance, without overpowering all the other aspects of a song. 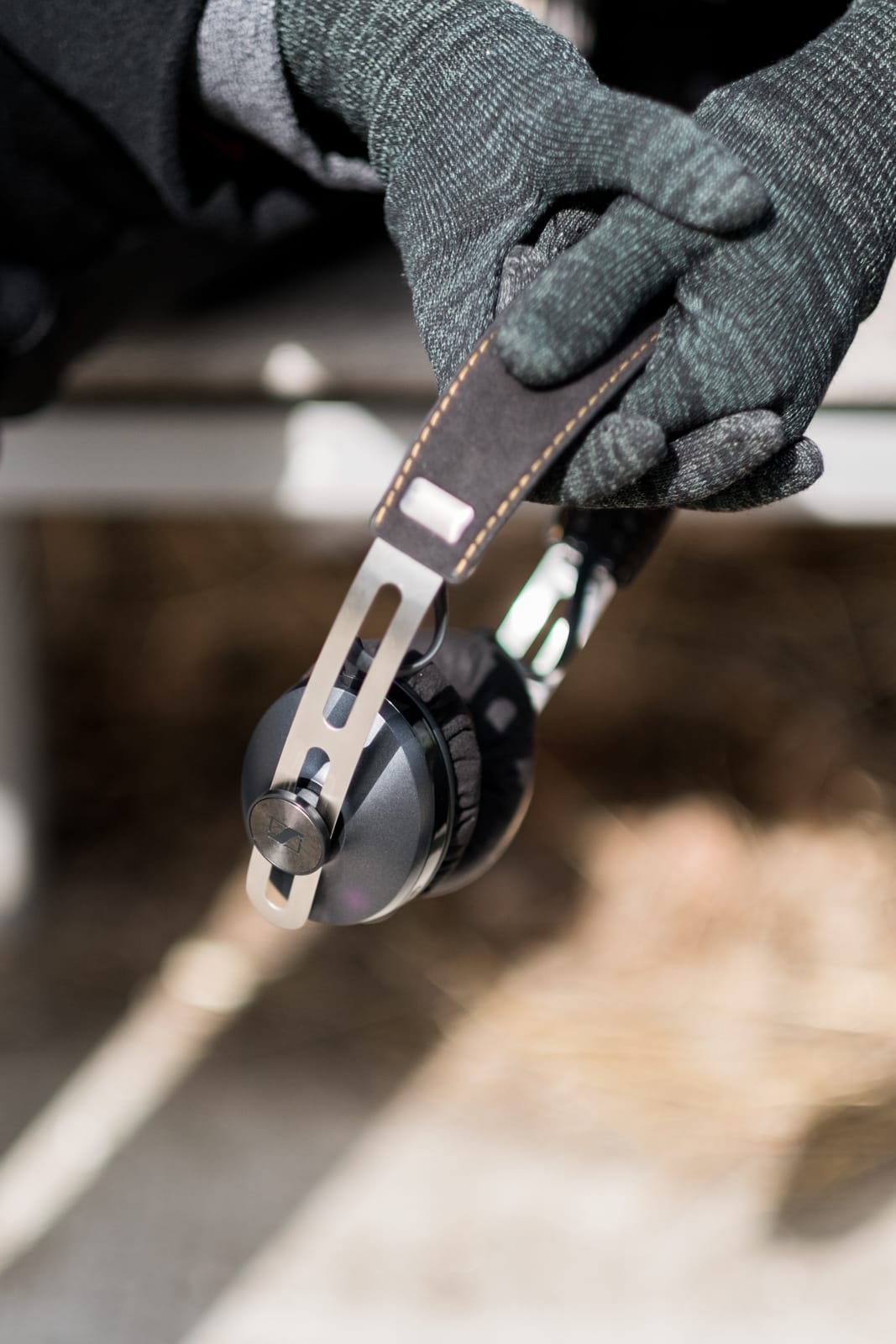 Branding is minimal on the HD-1, which is much appreciated.

There’s a decent soundstage when I listen for it: I can’t pinpoint exactly where a musician is standing, but there’s enough separation that certain elements of a song can feel closer or farther away. The $200 Sony MDR-10R BT could sound muddy in the mids — as if there was a layer of paper between me and the music — but there is no such issue on the $400 HD-1 On-Ear.

The Bluetooth connection on the HD-1 was great for the first four or five months, but I have been getting a few noticeable hiccups in the past few weeks. Some of these are little drops in sound for a second or two, and the worst ones are outright disconnections from the iPhone, accompanied by “Disconnected!”. I’ll hear “Connected!” moments later, but I’ve never experienced this issue on any other Bluetooth headset. Neither the Jaybird Bluebuds X nor the BeatsX earphones will outright disconnect from the iPhone. 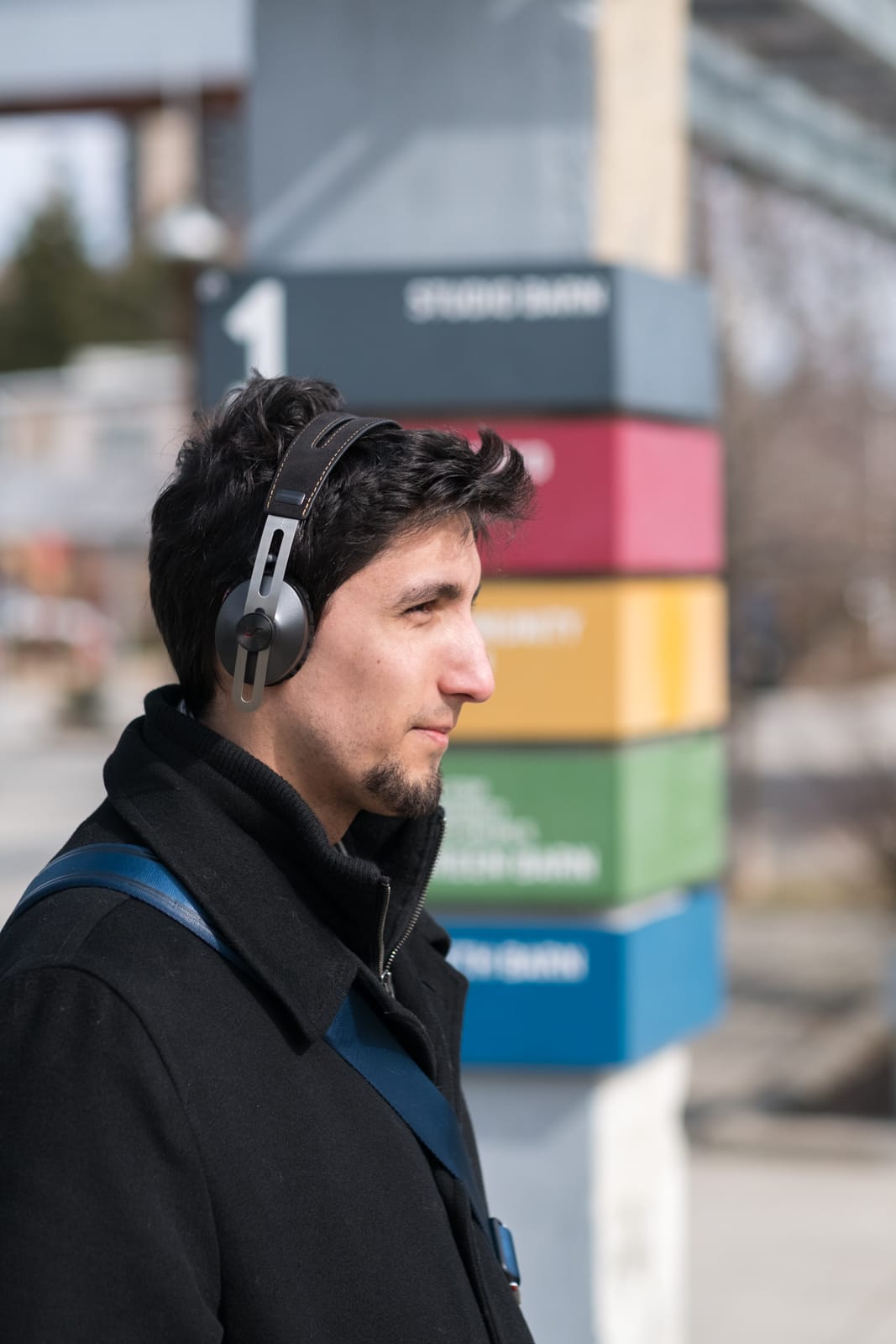 Brief sound drop-outs are normal for Bluetooth headphones, but I did expect more from the HD-1 in terms of stability. 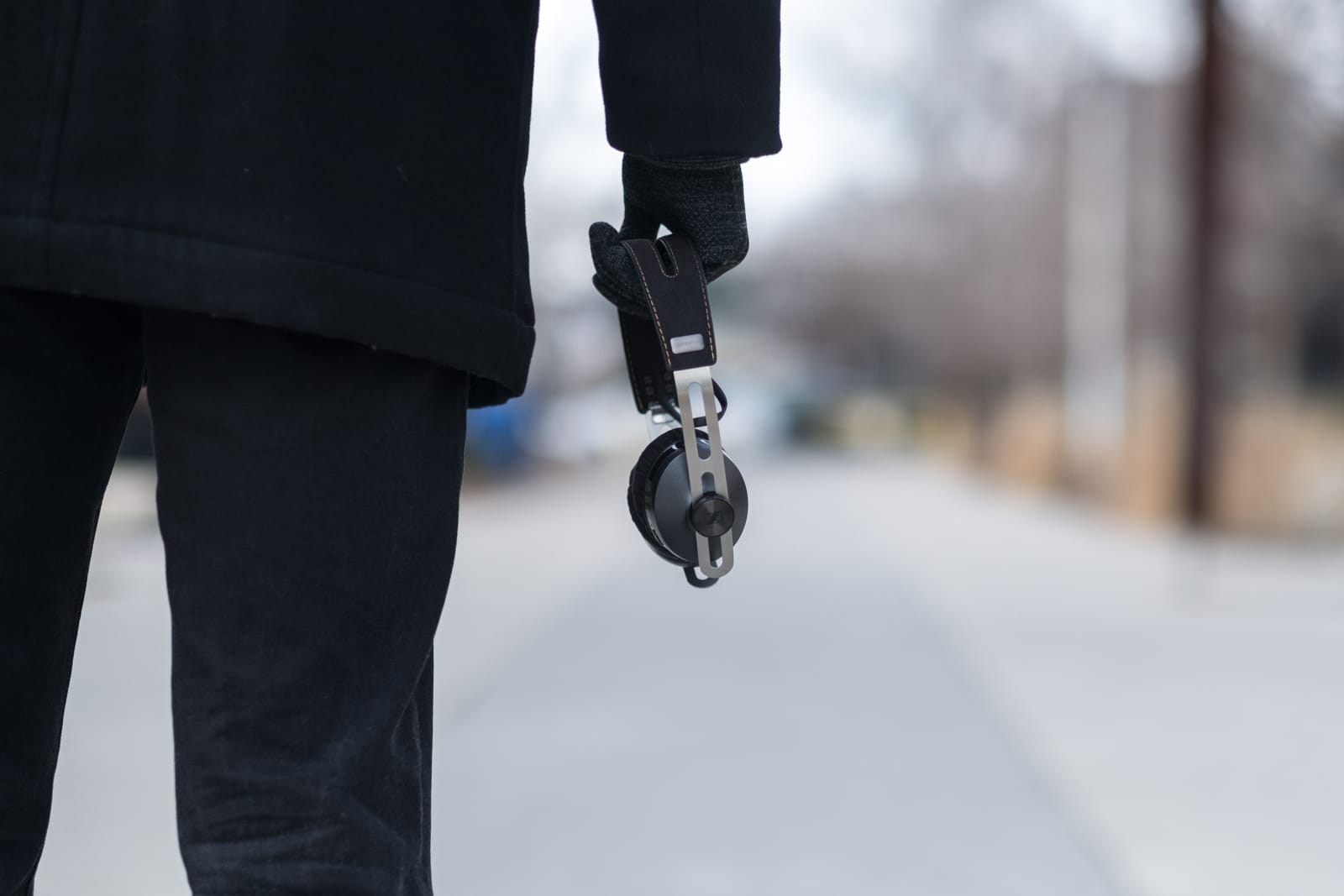 The controls on the HD-1 are minimal: a single volume rocker that you can press to toggle playback, and a power button that you hold down. Both are on the right earcup.

My other complaint is more subjective: the HD-1 lacks an auto-sleep timer. The headphones are rated for 22 hours of playback with ANC on, but they never feel like they last that long because they don’t automatically shut off after being disconnected or staying idle. I understand not everyone wants this, but I think it’s a great quality of life feature to have in a product. I need to remember to switch the HD-1 off each time I’m done listening for long periods of time, or I’ll end up having to charge them every two to three days. 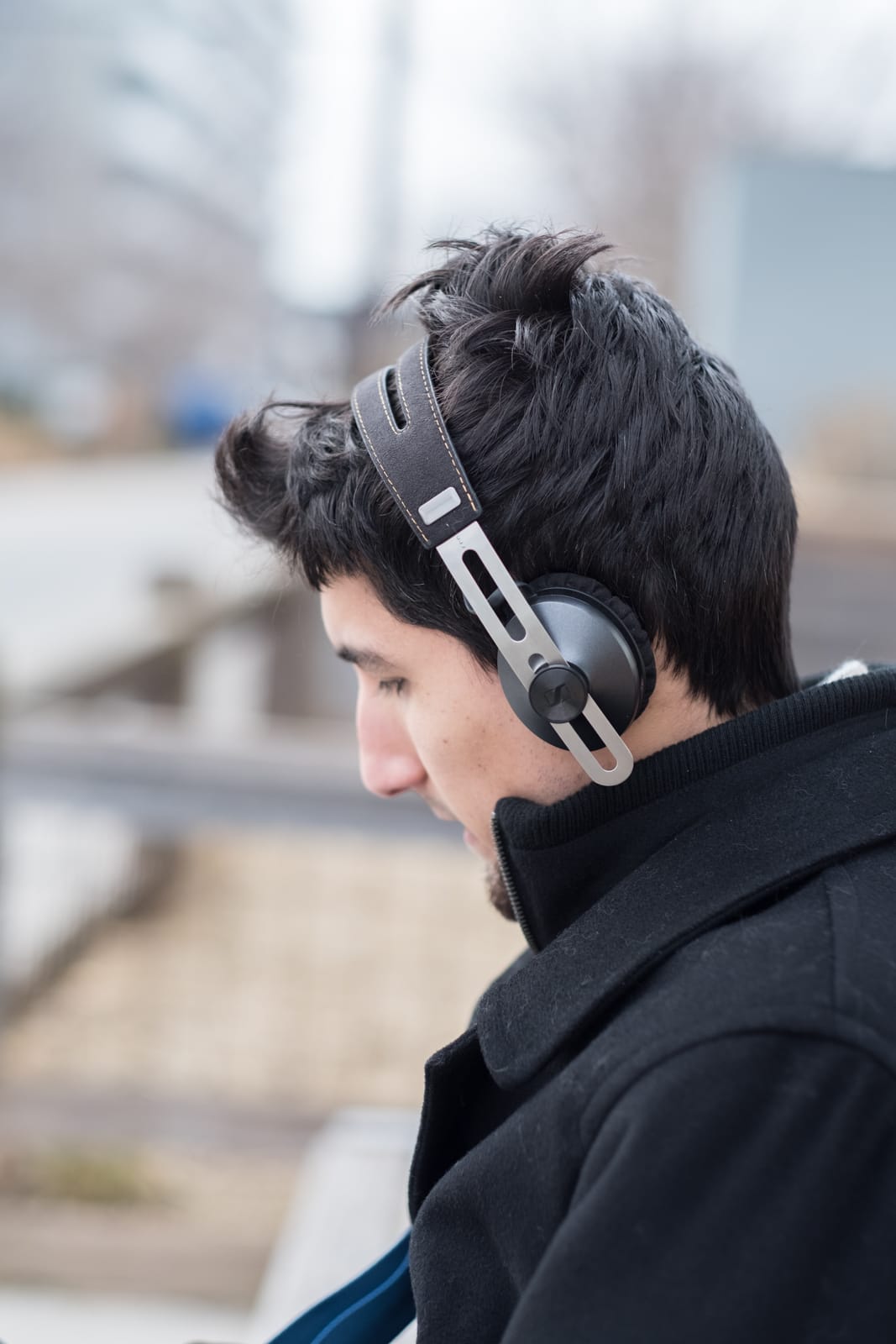 One interesting design detail: the band on the HD-1 doesn’t extend, you simply shift the earcups up and down.

In contrast, the MDR-10R BT could easily last a week on a charge. They had auto-sleep, and that feature made them feel like a device I could use and not think about. The HD-1 may be able to pull off 22 hours of straight playback, but I’d argue it’s the time between charges that matters more — these headphones do not last as long as a cheaper Sony pair that were rated for 17 hours of playback.

My hope was to double my budget for wireless headphones and purchase a pair that felt like a clear upgrade in feel, fit, and sound. 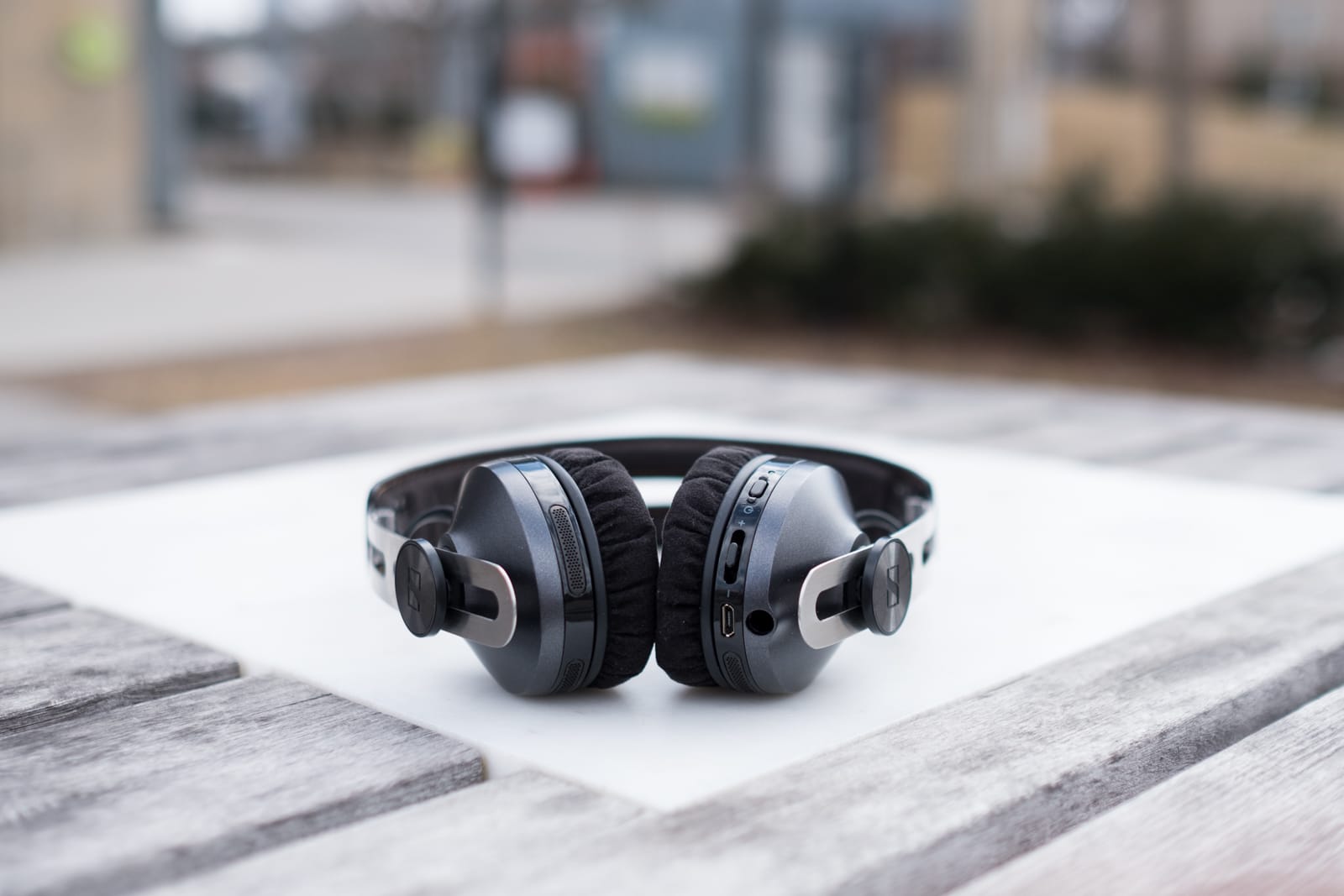 These headphones are beautiful, but not quite the clear upgrade I was looking for.

The HD-1 delivers sound that I can lose myself in, and they do feel like a robust pair of headphones that can be tossed around without worry. However, the tight fit hampers the experience: it’s tantalizing to have sound that I’d love to listen to for several hours, but a headband design that starts to feel painful after just one hour. I also wish they were a little bit smarter about battery conservation, so they didn’t feel like “yet another thing to charge”.

If you’re looking into the HD-1 wireless for their looks and great sound, I’d bypass the on-ear model and go straight for the more expensive over-ear model. The physical profile will be larger, but I think the increase in comfort will be worth the tradeoff. 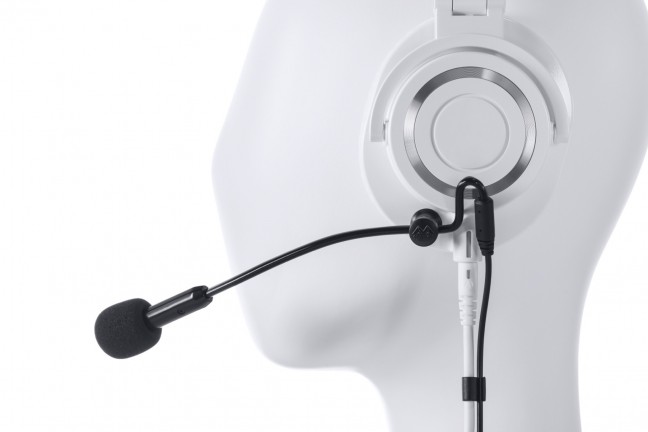 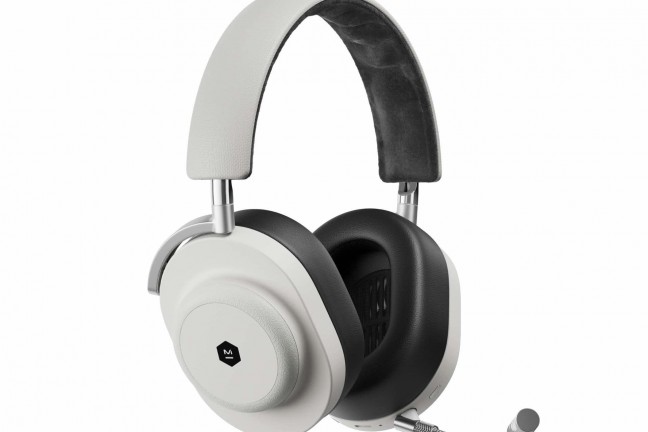 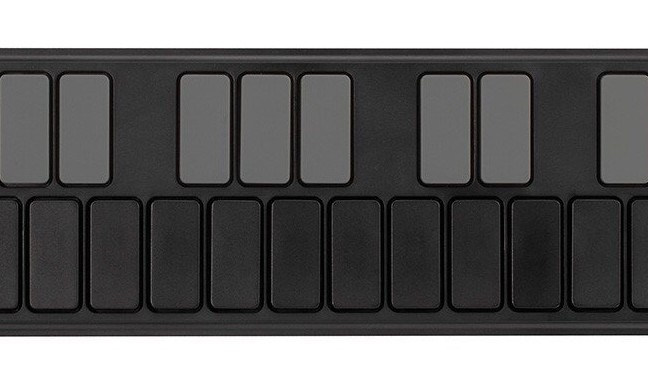