We love our cast iron skillets here at T&T. Not only do they perform awesomely in the kitchen (once they get hot, they stay hot), but with proper care and maintenance they can literally last generations. If you’ve ever been lucky enough to be given a grandparent’s old cast iron skillet, relish this gift and take care of it. It will take care of you in return.

In this guide, we will be covering some of our favorite gear, methods, and recipes for using and maintaining a great cast iron skillet. Whether you are a cast iron novice or a seasoned veteran (see what we did there?), we hope you enjoy and learn something new from it. 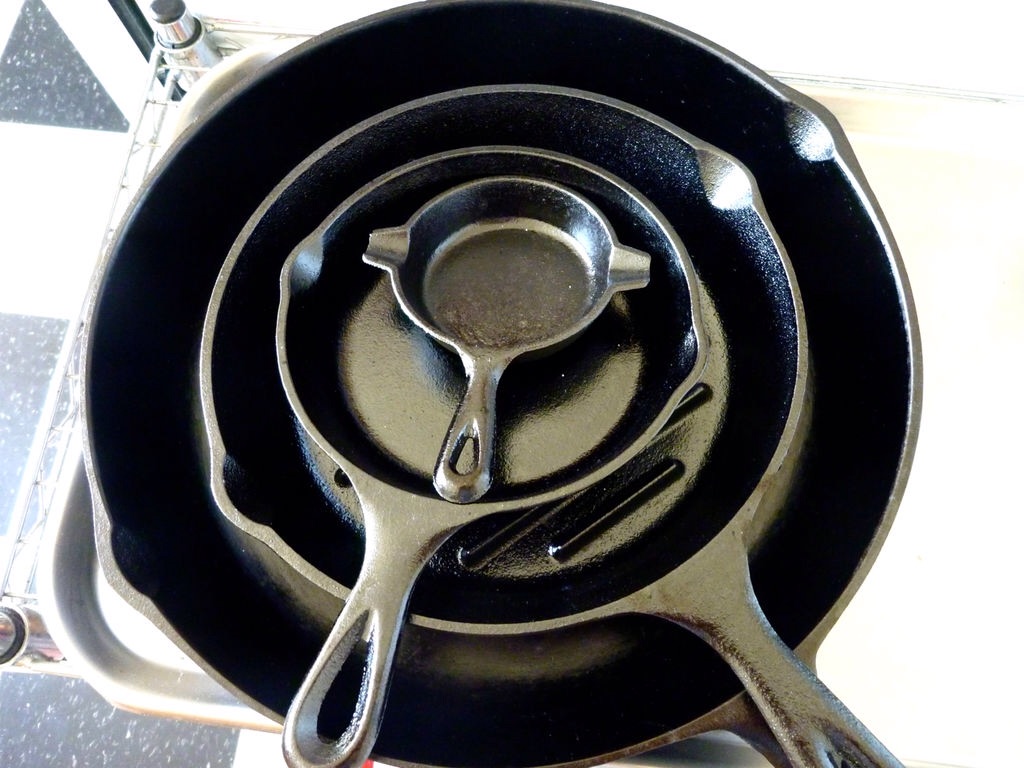 When it comes to acquiring a cast iron skillet, there are three general recommendations we’d make: 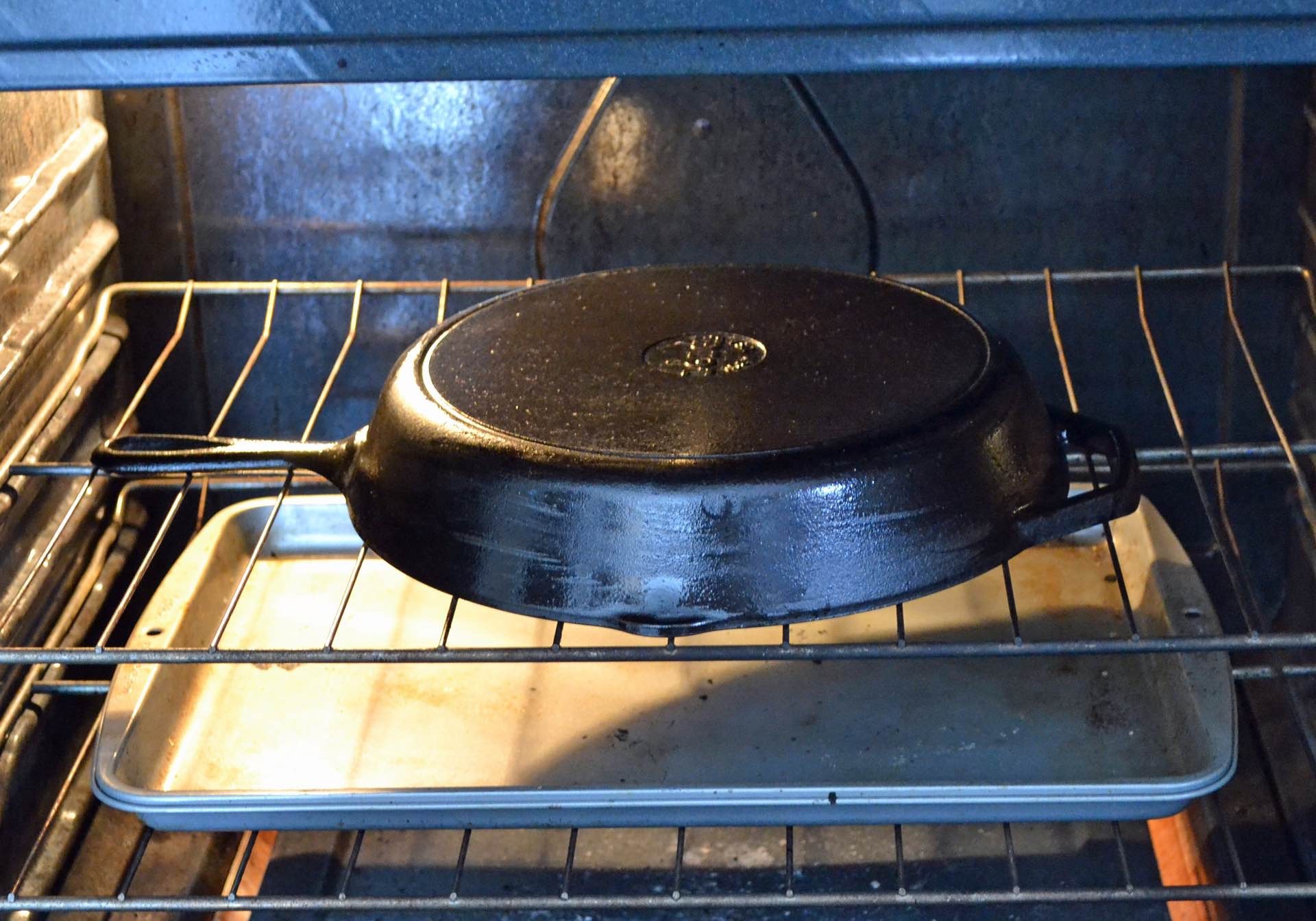 So, you’ve acquired a skillet — now what? First, you’ll need to properly season that bad boy. Even if you think it already looks fine, season it yourself anyway. Yes, this includes the pre-seasoned new ones.

Seasoning is what makes cooking with cast iron great. The concept is simple: take a thin layer of oil, heat it just past its smoking point for a while, and it breaks down into a nonstick, plastic-like substance that chemically bonds with the iron (this is a process known as “polymerization”). Do this enough times and you’ll have a pan that can perform on a level with any nonstick skillet out there, without involving any weird chemicals.

Assuming the pan isn’t in bad enough shape to require a total restoration (which we’ll discuss in the next section), the seasoning process is fairly simple. All you need is oil, heat, and time.

Though many people in recent years have recommended using flaxseed oil to season with, we prefer good ol’ Crisco shortening. You can also use lard, vegetable oil, olive oil, peanut oil, or coconut oil. Whatever you like.

Keep in mind that you may have to season the pan a few times before it takes on true nonstick qualities. Of course, simply using the pan over time, especially for frying, helps quite a bit.

Sure, this whole process sounds tedious at first, but there’s something Zen-like about the project that we both enjoy and take pride in. 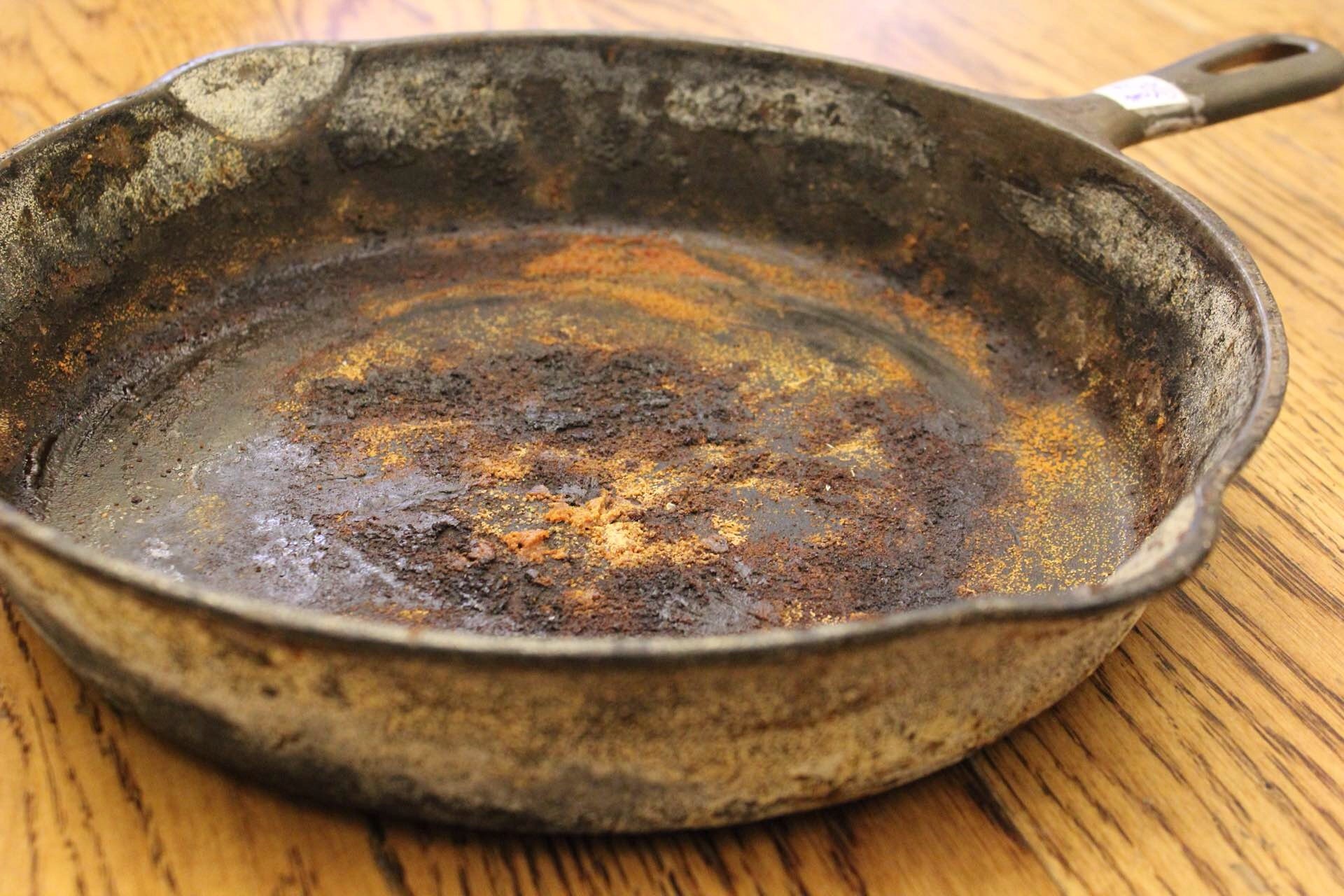 Don’t panic — we can fix this. It’s all going to be okay.

In extreme cases — meaning the rustier and more crusted pieces out there — it’s best to start over from scratch. There are many methods for rehabilitating cast iron, whether old or merely botched:

Cleaning a cast iron skillet is the subject of much debate. Is it safe to use a scrubber? What about soap, doesn’t that ruin the seasoning? The list goes on.

On the soap issue: most modern soaps are not intense enough to affect a good layer of seasoning. You can go ahead and use a little dish soap and hot water without fear, though we understand if you still prefer not to. What you really want to avoid is leaving any water on the pan for too long, as that can cause it to rust. Definitely do not run this thing through the dishwasher.

Here are some of the extra goodies that help us get the most out of our cast iron skillets: 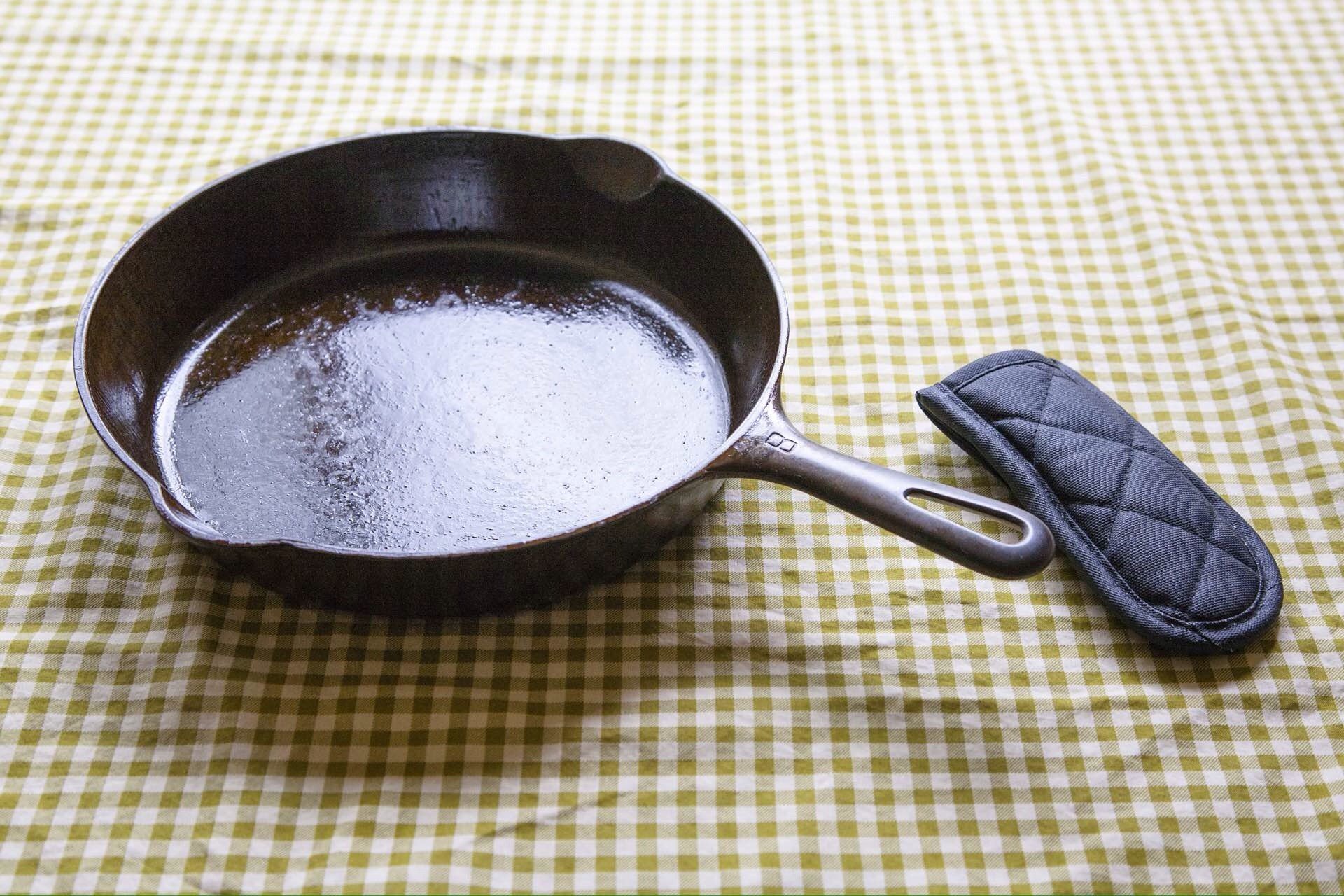 Most cast iron skillets aren’t equipped with heat-dissapating handles like the ones made by Finex. That means they get hot while cooking, even if they’re not directly over the heat source. This handle mitt makes, er, handling the pan way easier — and in a non-clunky way.

Just slip it onto the skillet handle and boom, you can comfortably hold the skillet without fear of burns. The mitt has a scorch-proof coating to protect itself against steam burns, and it resists temperatures up to 450°F. 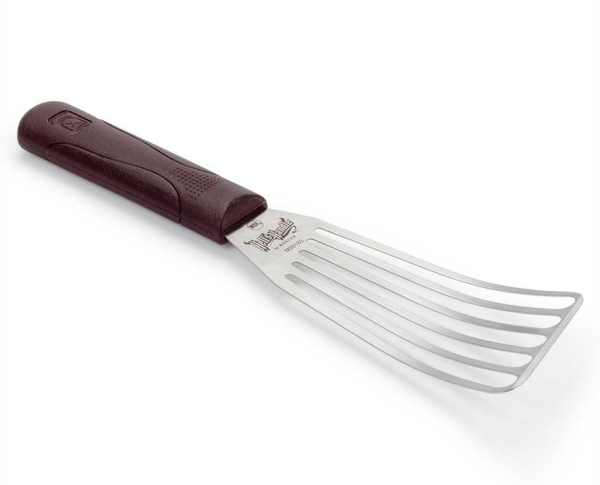 Despite its name, this spatula isn’t just for flipping fish — it works just as well with burgers, steaks, stir-fry, cookies, casseroles, lasagna, and more. The combination of its shape, thinness, and flexibility allows it to wriggle underneath foods without disfiguring them, but it’s also strong enough to lift relatively heavy foods with no problem.

The nice part about using it with cast iron is that neither its stainless steel blade or polypropylene handle will melt just from resting on the edge of the pan. And don’t worry, unless you’re gouging the metal or something, your seasoning will remain intact despite the spatula’s hard edges. 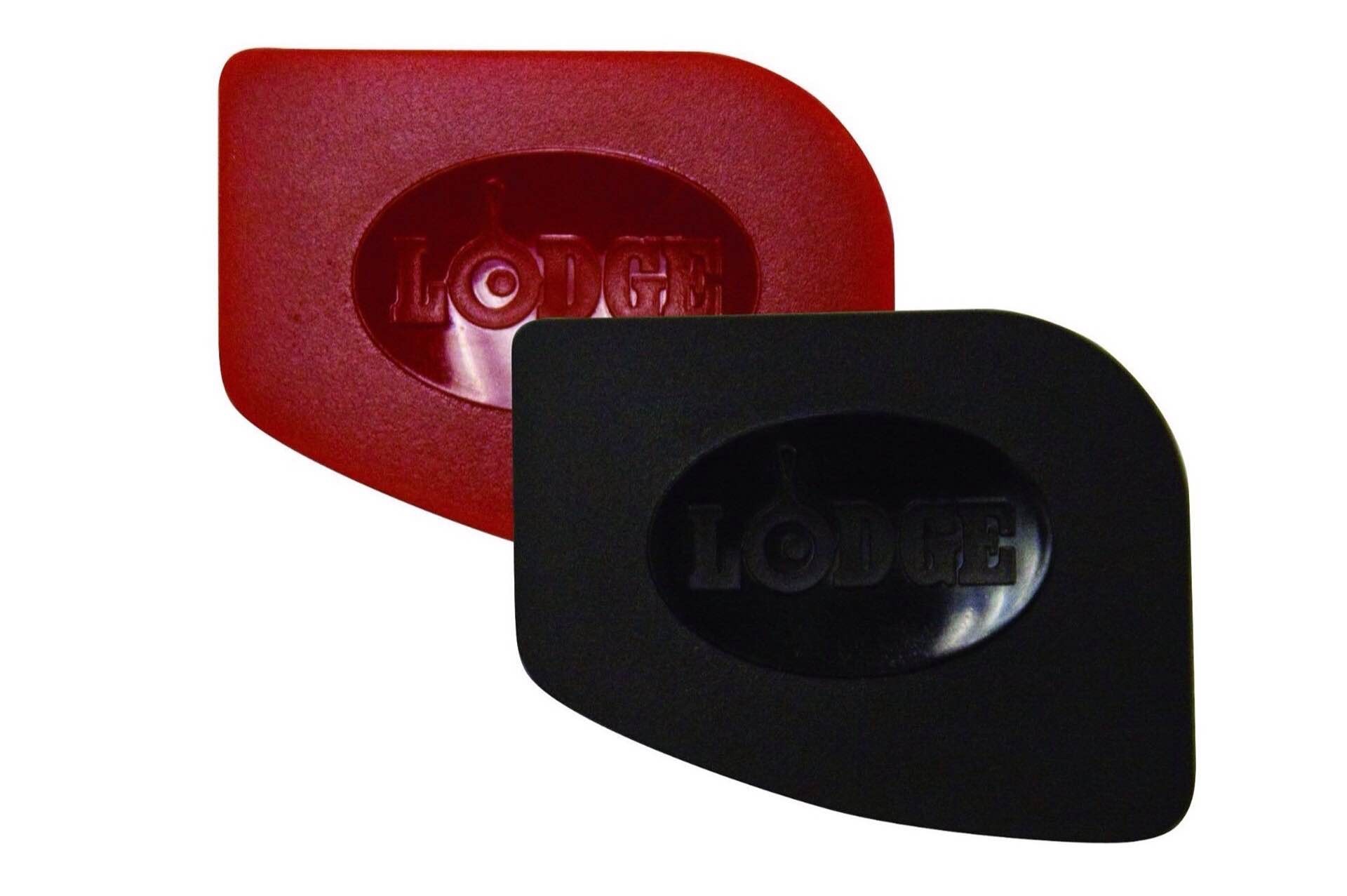 Lodge’s polycarbonate skillet scrapers. ($6 for a pack of two)

These little guys are made of hard plastic (#3) and make it easy to remove stuck-on food from a cast iron skillet without damaging its seasoning. Also works on non-stick skillets. I like that they’re shaped in such a way that you can get into the “corner” between the sides and bottom of the skillet without too much trouble.

We’ve heard of people using bamboo wok cleaning brushes and chainmail scrubbers to great effect, but we have no first-hand experience to speak of.

What to Cook with a Cast Iron Skillet

Really, you can cook just about anything in a cast iron skillet (though you might want to avoid acidic foods such as tomatoes and lemons if the seasoning is on the younger side). It’s especially good for searing steaks and cooking “southern comfort” (i.e. fried) foods like potatoes, cornbread, bacon, and eggs. 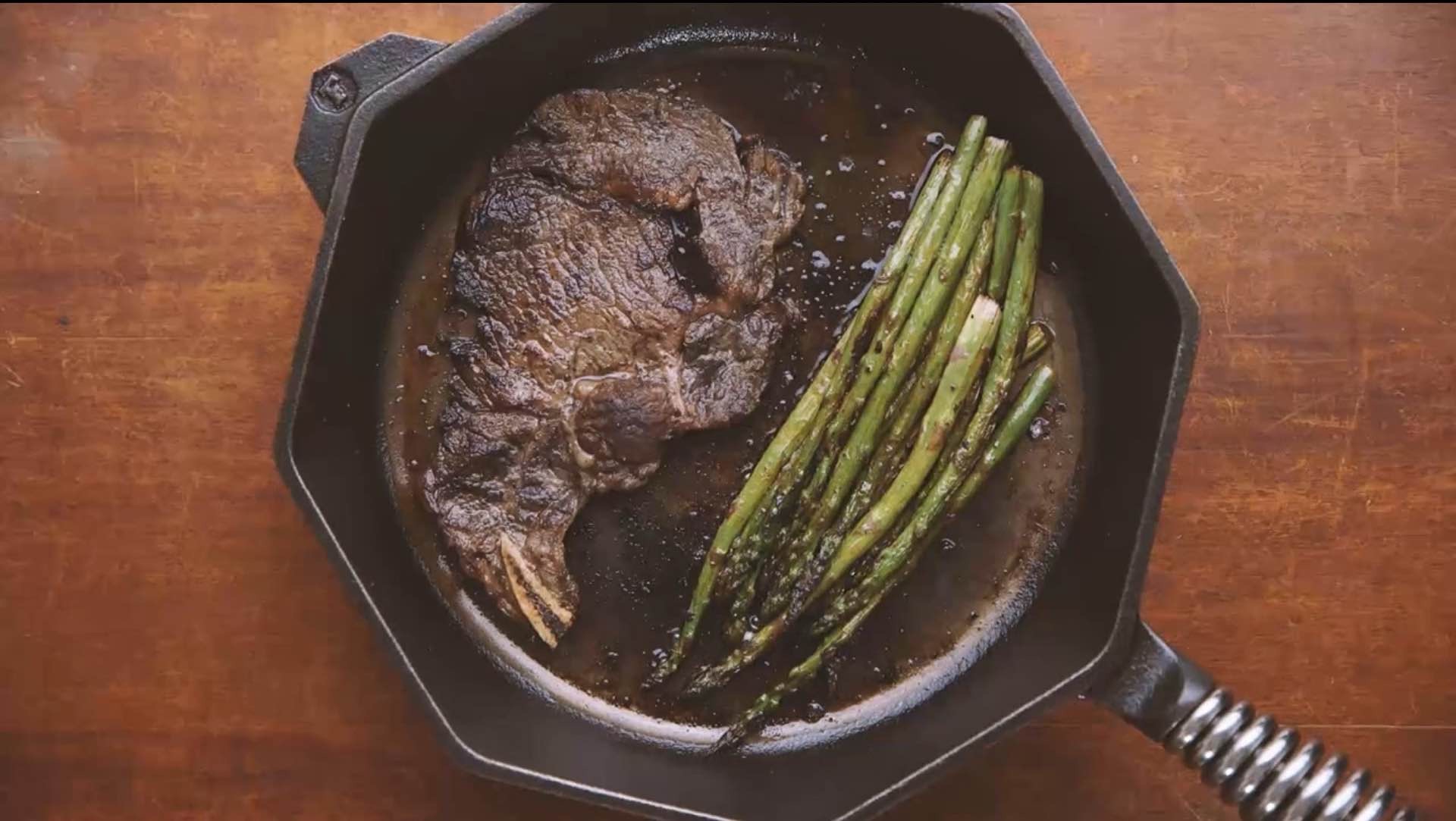 Like the hero image at the top of the page, the tantalizing image above was taken from this Vimeo video by Finex.

There are so many other recipes that work well in cast iron that we can’t possibly list them all here. There are entire cookbooks devoted to the subject, even. A Google search for “cast iron skillet recipe” alone turns up tons of delicious things to try. Do some digging and figure out what works best for your needs.

The most important thing is to have fun with your cast iron skillet! With a little TLC your skillet will probably outlast you, and it will produce some delicious meals along the way. 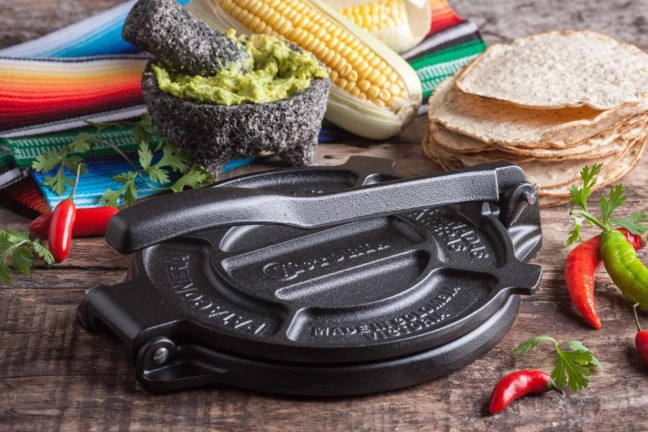 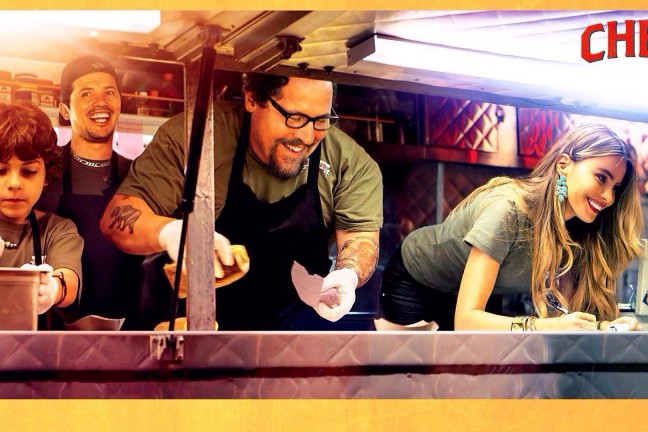 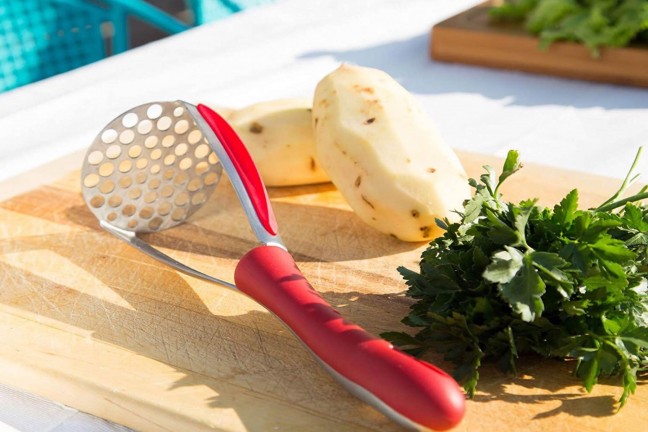